The furry hero of the 2017 London Marathon unmasked: Mr Gorilla is still crawling his way to victory.

The London marathon is a hard enough feat as it stands as only those with peak fitness levels can handle the gruelling 26 mile stint around the capital. It goes without saying that with my diet currently made up of 70% takeaways and 40% chocolate I will not be competing any time soon and therefore I hold those who do manage to find the dedication and stamina to compete in very high esteem.  At yet some individuals, these paragons of goodness, go the extra mile (no pun intended) to push themselves further with the addition of peculiar and inherently cumbersome costumes all in the name of raising money for charity. Enter Mr Gorilla who is crawling his way into the nation’s hearts for a very worthy cause. 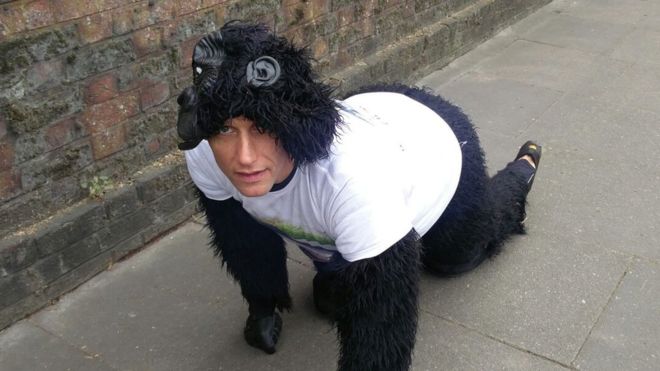 Unmasked as Met Police officer Tom Harrison, aka Mr Gorilla apparently decided that running the marathon in a gorilla suit was not enough. No, in true gorilla fashion, this brave man decided that he was going to crawl across the entirety of the course and is at this very minute still making his way towards the finish line since starting his epic quest on Sunday morning.

Whilst still apparently in high spirits despite blistered and cut hands and knees the brave Mr Harrison quipped, “I’m going good, I’ve just been having a gorilla power nap. Just been napping on some bark chippings under an old tree, which is the perfect gorilla nesting habitat really”.

All of Mr Harrison’s efforts have been on behalf of The Gorilla Organization which is dedicated to conserving gorillas in Rwanda, Uganda and DR Congo, and Mr Harrison’s Just Giving page for his marathon effort has so far raised more than £1,500 for the charity.

Mr Gorilla hopes to complete his marathon on Friday a whole 5 days after starting. It is wonderful to see someone raising the profile of endangered gorillas in the mainstream media. And for once it is not about Harambe.

If you would like to support Mr Harrison in his efforts you can donate to his Just Giving page here. Go Gorilla man go!