Taylor Herring win Agency Of The Year at the BVA Awards.

Taylor Herring picked up the top award at the BVA’s this week – scooping the coveted Agency Of The Year prize.

The British Video Association honours the best in TV and Movie marketing and retail in the home entertainment sector.

BVA members (including Universal, Fox, Warners, BBC worldwide, Channel 4 and ITV Studios) account for some 90% of this £2 billion+ industry and include film and television companies and independent labels which produce, license and distribute film, sport and fitness, music video, TV, children’s and special interest programming. 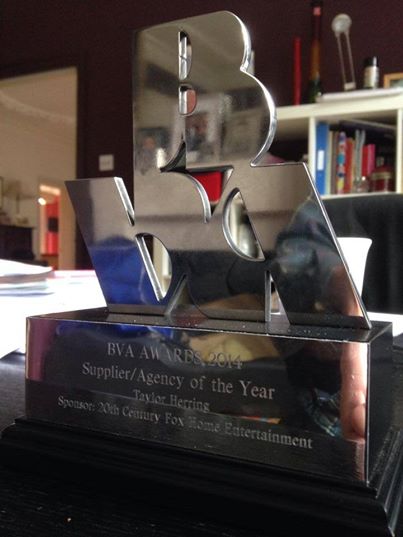 Taylor Herring has been working as blinkbox’s retained PR agency since January 2013. Media stories mentioning the brand are up to 518% year on year. Viral videos, stunts, social media work and screening events have all captured public attention and helped contribute to a rise in unprompted brand consideration by 200%.

These have led to a 450% increase in transactions from referral traffic. A record breaking festive period saw sales explode 245% compared to the previous year.

What the judges said:

“Sometimes it’s not the size of the budget that counts, but the size of the imagination and Taylor Herring has shown huge ongoing imagination with its PR campaign for Tesco streaming service, blinkbox. Making an impression in a market dominated by Netflix and Amazon/Lovefilm was never going to be easy, but the judges were won over by the creative vision of the Taylor Herring team. The launch of a Gosline, a Ryan Gosling helpline, went viral. It staged a Star Trek Into Darkness inspired teleporter stunt in a shopping centre, hiring twins for a fake transportation routine. For Game of Thrones, the agency created a lifesize dragon skull, placing it on a beach, and gambling on social media to make the connection with blinkbox (it did). ”

Some of the work;