One Direction have released custom emojis to mark the launch of their new album Made in the A.M., out today, and Twitter has gone into meltdown.

As if Twitter wasn’t already dealing with enough today (Justin Bieber’s album has also landed), the One Direction boys just made the social media battle a whole lot more interesting.

Twitter has partnered with the band in a global bid to find their biggest fans. For just 24 hours from midnight tonight, Directioners around the world can show their loyalty by tweeting one of 140 designated country hashtags such as #1DUK. In a world-first, the 10 most frequently tweeted countries will receive a custom-designed emoji, featuring the One Direction logo and their national flag. 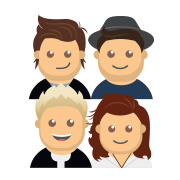 And if that’s not enough 1D for 1Day, you can now tweet exclusive emojis of Liam, Louis, Harry and Niall, plus a group one and a special emoji for the album, using the hashtags #1DLiam, #1DLouis, #1DHarry, #1DNiall, #1D and #MadeinTheAM.

#1DHarry quickly became the world’s top trending topic after the release yesterday. Sorry Beliebers, but with over 700 million One Direction tweets so far in 2015, the Directioners have truly taken over Twitter.

They might have announced they’re taking a break next year, but clearly nothing is dragging this band down.

A Christmas surprise at KwikFit