A lovely Christmas surprise from one John Lewis to another.

If you have been to one of the John Lewis stores over the past few years and have decided to tweet something to them you, like many others, may have discovered that you had not tweeted the store at all but a kind-natured American man who shares the same name as the UK retail chain. He describes himself on his twitter bio as a “Computer science educator, father of four, social liberal, atheist, and not a retail store.”

Never one to lose his wit John Lewis (not the retail store) doesn’t leave an obviously misplaced tweet alone but instead has been providing humorous answers and rebuttals to compliments and complaints alike. Building a following of 21.3K followers himself, John Lewis (not a retail store), has become a celebrity in his own right.

Received a huge package from @johnlewisretail including this amazing embroidered cushion. So cool! Thank you very much! pic.twitter.com/cIMAvPol5D

The real John Lewis on top of that has received an array of Christmas goodies including crackers, ornaments and wrapping paper perfect for getting into the Christmas spirit. As well some of the hotly awaiting plush versions of Buster, Sid and Olivia the stars of this year’s John Lewis’ (retail store) Christmas advert which has already amassed more than 17 million views on Youtube. The tweets posted by John Lewis (not a retail store) showing off his new presents have already been shared with over 10,000 people making this PR outreach both successful and extremely heart-warming. 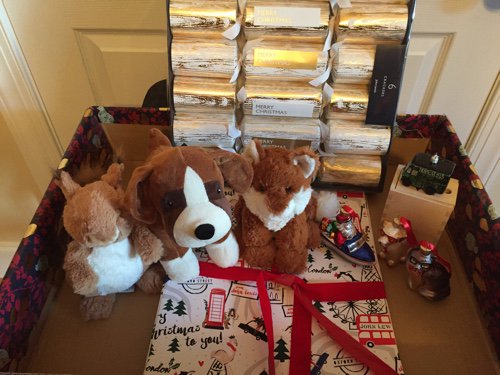