► The haunting figures met at Big Ben at twenty to nine – the time Miss Havisham was jilted by her fiancé and heartbroken, stopped all of the clocks around her

Five women transformed into Miss Havisham, the sinister spinster described by Charles Dickens as ‘the witch of the place’ in coming of age novel Great Expectations, were unleashed on London today.  The Miss Havishams pay homage to the most haunting literary character, according to a recent survey. 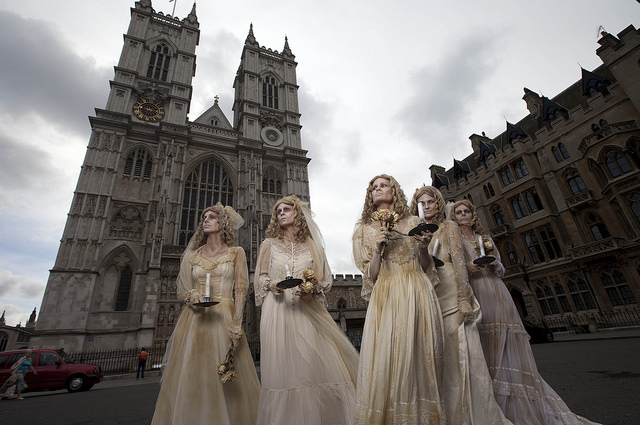 The models were commissioned to appear as the character to celebrate the screening of Great Expectations on TV channel Drama this Sunday 25 May at 6pm and repeated on Monday 26 May at 4pm. 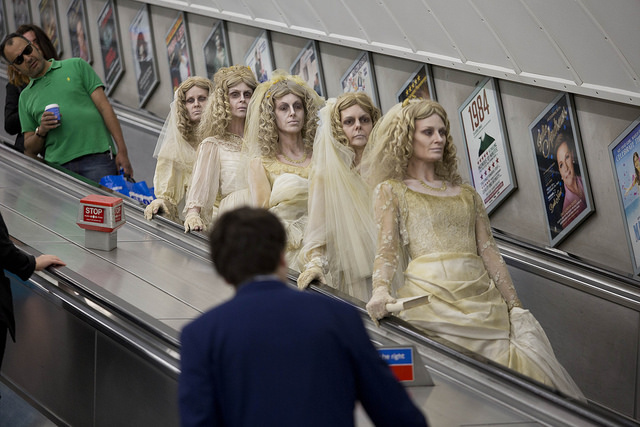 It was an early start for the five models who each spent over three hours being transformed by a team of stylists, costume designers, make-up artists and dressers before travelling by public transport into central London this morning.  Renowned costume designer Katya Wildman and her team spent two months sourcing and ageing the wedding dresses, veils, flowers and jewellery, while hair and make-up was created and applied by Deanna V’lcevska, Nicci Jackson and Julia Townend.  The team has worked with celebrities including Helena Bonham Carter, Jerry Hall, Scissor Sisters and The Who. 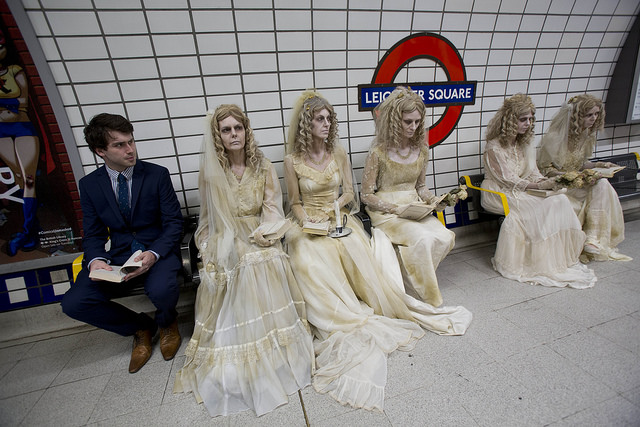 Once ready, the Miss Havishams travelled amongst surprised commuters on the London Underground and buses before congregating in front of Big Ben at 8.40am, the time Miss Havisham is jilted by her fiancé Compeyson in the novel and stopped all of the clocks around her.  The Miss Havishams also visited Westminster Abbey, the final resting place of author Charles Dickens. 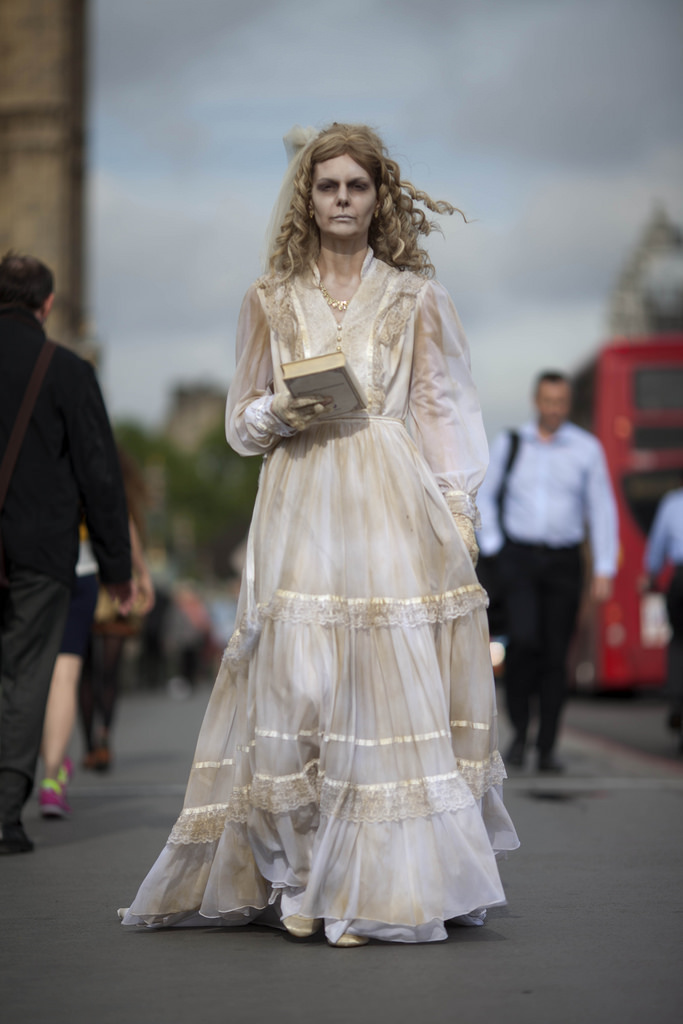 Costume designer Katya Wildman says, “We watched a number of actresses playing Miss Havisham, including Gillian Anderson, Helena Bonham Carter and Charlotte Rampling as well as reading the descriptions of this haunting character in the book.  We wanted to capture Miss Havisham’s ethereal beauty as well as the decaying of her clothes and spirit as a result of her long period of mourning for the wedding she never had.  The result is a complete transformation of our five models that we hope captures the essence of this haunting and very moving character.”

Miss Havisham can also be found on Facebook as well as dating sites Guardian Soulmates, Match.com, Tinder and even My Single Friend, where she has been recommended by a well-meaning Pip.

Adrian Wills, General Manager of UKTV channel Drama says, “The Miss Havishams are a fitting tribute to one of the most memorable characters ever created.  We like to think that Charles Dickens, who is buried in Poets’ Corner in Westminster Abbey, would have been amused to think that more than 150 years after he created Miss Havisham she is standing at the foot of Big Ben at twenty minutes to nine, still pining for her lost love.”

Snapshot Of Coverage So Far; 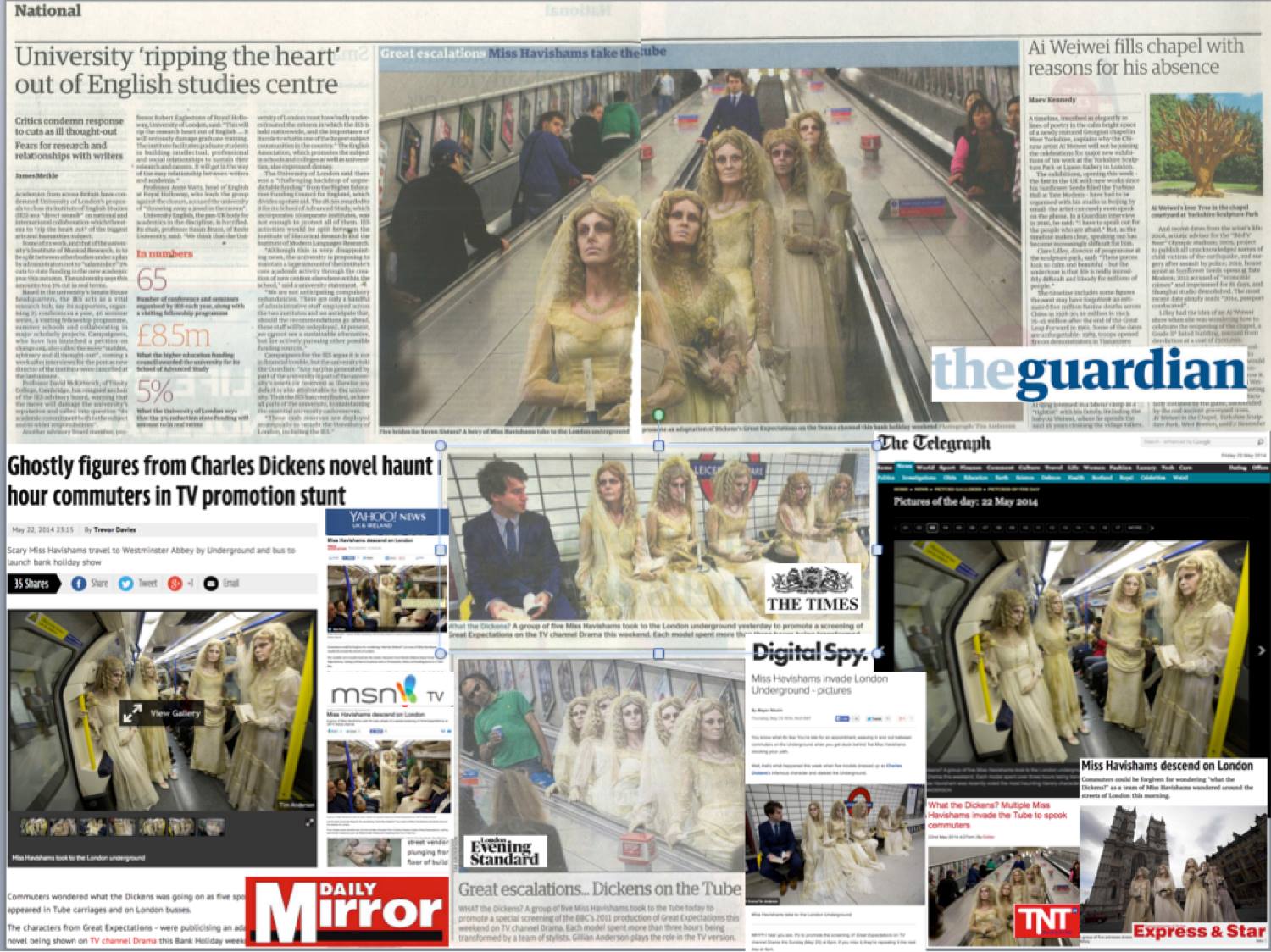