Every May thousands of film makers slog it out for media attention at the Cannes Film Festival, in the South Of France. Here’s 10 of our favourites.

2. A vulture is paraded down the red carpet for the VIP screening of Over the Hedge. (2006)

3. To promote Bee Movie – Jerry Seinfeld zoomed down a 126 meter wire which took him across a four lane road, to the beach pier below where the press pack of international media were assembled. (2007)

4. On one of the hottest days of the year Jim Carrey steps out into a winter wonderland of Christmas trees, frost covered lawns and snow to promote Disney’s new version of A Christmas Carol. (2009)

5. Brigitte Bardot raised temperatures on the Cote d’Azur when she appeared in just a bikini. (1953)

9. Dreamworks created a giant “Gromit” from the animated film Wallace and Gromit: The Curse Of The Were-Rabbit. (2005)

10. It’s not all about the stars. Performance artists storm the red carpet in protest against French unemployment benefits as planned – the lettering backs reads “negotiation”. (2004) 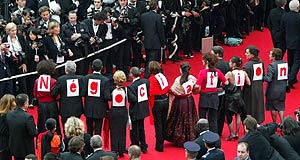 If you think there’s anything missing here please do let us know. Contact: [email protected]

If you enjoyed this post visit our Publicity Stunt Hall Of Fame – which lists the Top 70 PR stunts of all time.