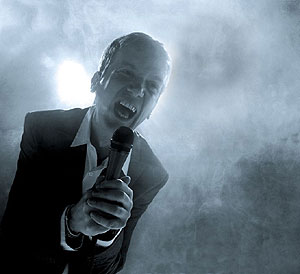 2. David Baddiel
“Everybody hates you – surely you remember that from school?”

5. Alan Davies
During a charity gig, where Davies was fiddling with the material of the curtain at the back of the stage, doing no stand up at all – the audience were getting restless and one shouted: “Tell us a joke Alan.” He shook his head and as he still had the curtain in his hand someone else shouted: “Wrong material Alan.” He then proceeded to storm off the stage and has never been back since.

6. Jim Tavare
To the Sketch Show star: “I’m a schizophrenic.” Heckler: “Why don’t you both fuck off?”

7. Dylan Moran
During a gig in Glasgow (having told the audience he has just come back from Italy), someone shouting: “Dylan, you’re not in Italy now, why are you drinking wine? Have a Scottish drink,” Dylan replied “What? Like a pint of Temazepam?”

9. Eddie Izzard
Izzard responded to an outburst with an encouraging, “Check your joke with your friend first and if he thinks it’s funny, then give it a try.” Another memorable time he responded to a heckler by telling him to shut up, and then saying: “I know people have already heckled tonight, but I WILL kill you.”

10. Bill Hicks
Audience member to Hicks, never known for his patience with hecklers: “I don’t come here to think.” Hicks replied: “Well, tell me where you do go and I’ll meet you there.”