Edinburgh, 19th August 2014: Award-winning TV channel Dave has announced the winner of the seventh annual award for Dave’s Funniest Joke of the Fringe.

For the first time in Dave’s Funniest Joke of the Fringe’s seven-year history, the award has been presented to a previous victor.

King of the one-liners Tim Vine has this year come top with nearly a fifth (19%) of respondents voting “I’ve decided to sell my hoover… well, it was just collecting dust” their funniest joke of the Edinburgh Fringe.

Tim also triumphed in 2010 with: “I’ve just been on a once-in-a-lifetime holiday. I’ll tell you what, never again.” 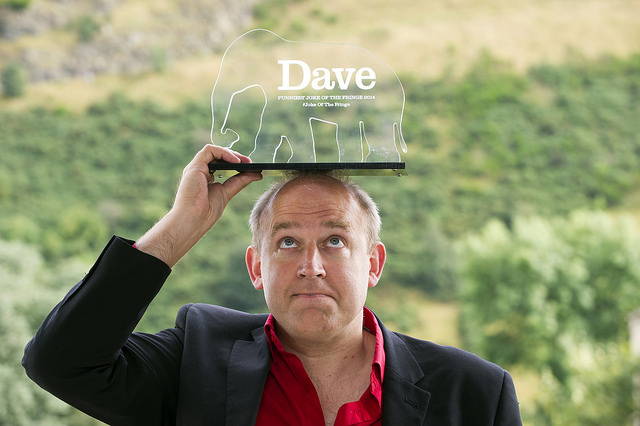 Three female comedians also feature in this year’s Top 10 as jokes from Bec Hill, Ria Lina and Felicity Ward proved to tickle the nation’s funnybone, reflecting the overall reported 62% rise of women performing at this year’s Fringe since 2013.

In its mission to find the most hilarious one-liners, Dave enlisted the help of an expert panel of ten judges, consisting of the UK’s foremost comedy critics.

They scoured venues at the world-famous Edinburgh Festival Fringe over a week-long period to nominate their three favourite jokes.  The shortlisted gags were then put anonymously to the public vote, with 2,000 Brits selecting those that they found the funniest.

=8.  “I forgot my inflatable Michael Gove, which is a shame ’cause halfway through he disappears up his own

10.  “This show is about perception and perspective. But it depends how you look at it.” – Felicity Ward

Dave’s first two-time winner and regular fixture on the top-ten list, Tim Vine is a firmly established comedian, whose silly one-liners have helped him achieve great success in the world of comedy.

As well as sold out tours and bestselling DVDs, he has appeared on various TV shows including Not Going Out and Blandings.

He first performed at the Fringe in 1993 and was awarded Best Newcomer in 1995.  His current Edinburgh Fringe show, “Tim Timinee Tim Timinee Tim Tim To You,” is a sell-out success at the Pleasance Courtyard, and his first stand up tour in four years is also planned for next Spring.

Of being awarded the top spot, Tim Vine said: “I’m a little bit surprised but very delighted. This is the second time I’ve won this award but I guess nobody loves a repeat more than Dave.”

In order to compile the shortlist, each of the judges sat through an average of 60 different comedy performances and sifted through more than 3,600 minutes of material. This meant they each had a potential pool of around 7,200* different jokes to choose from.

The Dave award, which is open to both established and up-and-coming comedians, pays homage to the wealth of talent on offer at the Edinburgh Festival Fringe whilst shining a spotlight on the individual jokes, not just the performances.

Steve North, General Manager of Dave commented: “It’s great to see a range of established and new comedians in this year’s top 10.  The award celebrates the fantastic range of comedy on offer at the Fringe, and Tim has once again proved he is king of the one-liners.”

The Edinburgh Fringe Festival is widely acknowledged to be the biggest arts festival in the world and takes place every August for three weeks in Scotland’s capital city. Starting in 1947, it was seen as a post-war initiative to reunite Europe through culture, and was so successful that it inspired more performers than there was room for.

For an exclusive interview with winner Tim Vine, please head to www.joindave.co.uk.

This year marks the seventh anniversary of Dave’s Funniest Joke of the Fringe.

To review the previous winners and highlights, visit http://www.facebook.com/davewittybanter