LONDON, Tuesday 21st August 2012: The booming London street food scene will face a new challenger to the taste crown this week as the first mobile gastronomers to offer a menu made up entirely of brains and offal roll into town.

Certain to cater to the tastes of customers, both dead and alive, who have a penchant for the innermost of body parts, The Gory Gourmet was created to celebrate next week’s release of zombie thriller series The Walking Dead Season 2, which arrives on DVD and Blu-ray on Monday 27th August. 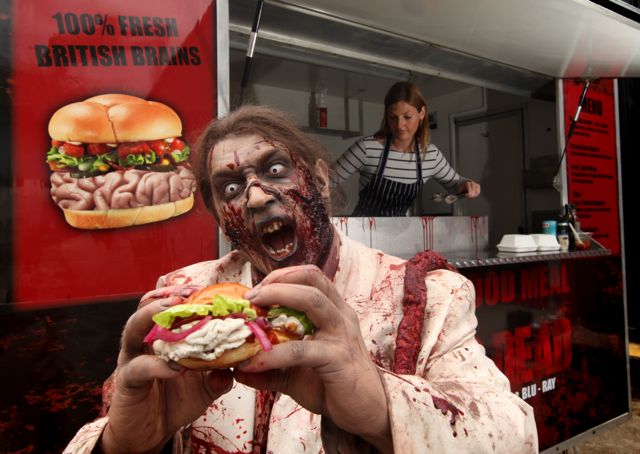 The delectable delicacies on offer will utilise meaty morsels that are all too often overlooked with a tantalising menu devised and developed by street food king, chef Mark Jankel. Formerly of Notting Hill Brasserie and now running the wildly successful mobile food company Street Kitchen, Mark will work his magic to freshly prepare the food on site.

Crispy chunks of brain with wild rocket and tarragon mayo

Nuggets of pig’s feet and cow thyroid with herb mayo

On Wednesday 22nd August, The Gory Gourmet will park up at world-renowned Camden Lock Market, just inside the entrance to Camden Lock Place, and will give away free servings of the dishes on offer to the lucky customers who are first in the lunchtime queue from 12.30pm. 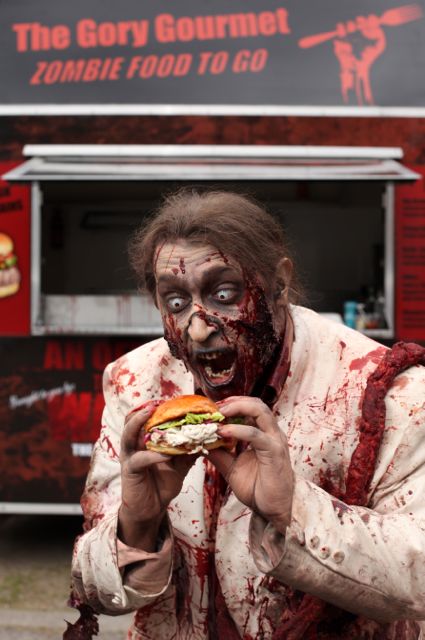 On Thursday 23rd, it will move on to a Lower Marsh Market, Waterloo for another lunchtime serving up the dishes to hungry Londoners, again on a first-come-first served basis. Potential customers will be able to track the trailer’s progress by visiting facebook.com/TheWalkingDeadUK and will also be asked to check in to the Facebook Location: The Gory Gourmet – before redeeming their free meal.

Further locations will be confirmed over the coming weeks.

Mark Jankel said: “I can’t wait to bring this completely new offering to the public this week…It’s a great opportunity to use some unusual British ingredients. After a heavy morning in the office our customers should have the appetite of the Walking Dead, lucky for us it means we should have some long queues!”

The second instalment of the post-apocalyptic, smash hit TV series, The Walking Dead: The Complete Second Season follows police officer Rick Grimes (Andrew Lincoln) as he continues to lead a group of survivors across the USA, in the midst of a zombie epidemic.

Out on DVD and Blu-ray on Monday 27th August, the critically acclaimed series is the perfect accompaniment to a brain burger.

Dave Award for the Funniest Joke of the Fringe.