Just in time for April Fools’ Day last year, Tesco tweeted a picture of their new in-store development…. aisle trampolines. Said to be incredibly useful for reaching products on the top shelf, these bouncy walkways were located on the sides of each aisle, leaving an appropriate space of ‘normal’ flooring for the trolleys.  #Practicalities. 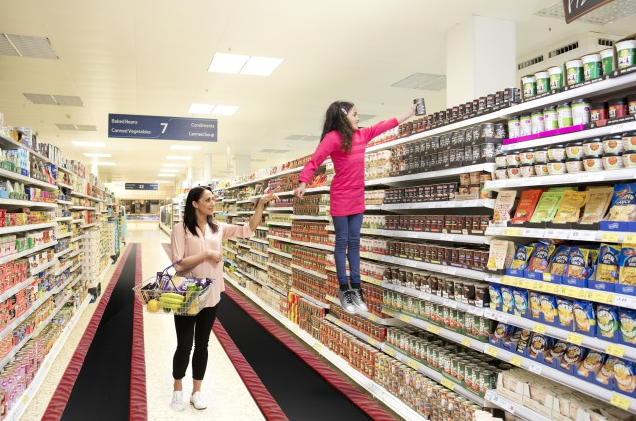 Promoted by ex-TOWIE and tumble star Lucy Mecklenburgh, the trampolines were hilariously branded as Spring Stepper Shelf Solutions® making 400,000 twitter users believe the hype- until they remembered what day it was.

We all wished were true; this genius idea would make popping to get some milk a whole new thrill of its own.

The things we do to get media attention…. 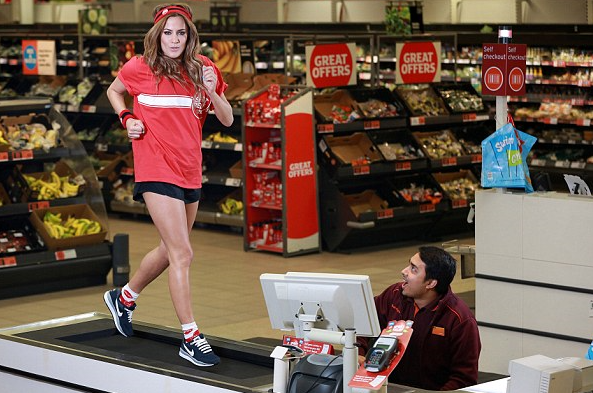 It seemed Caroline Flack was making the most of her trip to the supermarket, as she managed to fit in some training before the Sainsbury’s Sport Relief Games during her visit. On the checkout treadmill.

Amid the on-looking checkout staff, Caroline jogged at a steady pace raising awareness of Sport Relief, claiming that running on a checkout treadmill was “very similar to running on a normal treadmill, you’re just a big higher”. Who knew.

As part of Waitrose’s initiative to show how much they care for animal welfare, they set up cameras in various locations so their customers can see first-hand the conditions the animals are kept in. This video depicts a herd of cows chilling peacefully on a large green Dairy Farm. At one point a cow wanders over to the camera perched on the ground and has a good sniff, clearly seeing past the efforts of camouflage.

Finishing with a shot of cake covered in fresh dairy cream, this PR stunt is effective and does favours for Waitrose’s reputation as the home of organic produce.

We’ll try not to get confused here, but this year saw Iceland, the supermarket sponsor Iceland, the country in a bid to win the Euros.

Having unexpectedly qualified for the Euros, Iceland (the supermarket), encouraged brits to support Iceland and make them their ‘second team’, even handing out co-branded scarves to spur more British supporters.

Apart from sharing a name, both Iceland’s identified with an original sense of humour and have worked together on training and nutrition tips, and some behind the scenes training footage for some amusing short films.

Whoever said that the BFG’s snozzcumbers weren’t real, haven’t been to Asda! 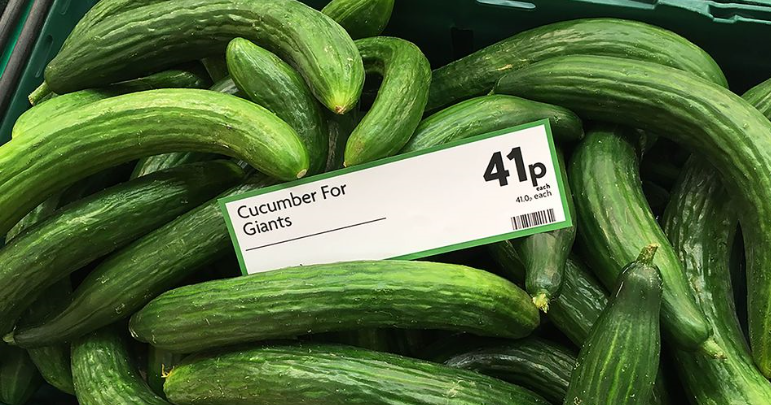 Celebrating Roald Dahl’s 100th birthday, Asda have labelled the giant misshapen version of a normal cucumber as ‘cucumber for giants’, in a hope to encourage reluctant children into eating their greens.

Although in the story snozzcumbers are said to taste of frogskin and rotten fish, the ones being sold in Asda taste like any other cucumber, being sold at 41pence for a limited time only.

Welcome to the sixties

A sixties style Tesco mock-up branch was opened for Goodwood Revival motor racing, a three-day annual festival celebrating vintage cars and motorcycles. Where for three isles customers were able to peruse the shelves with products from the era. 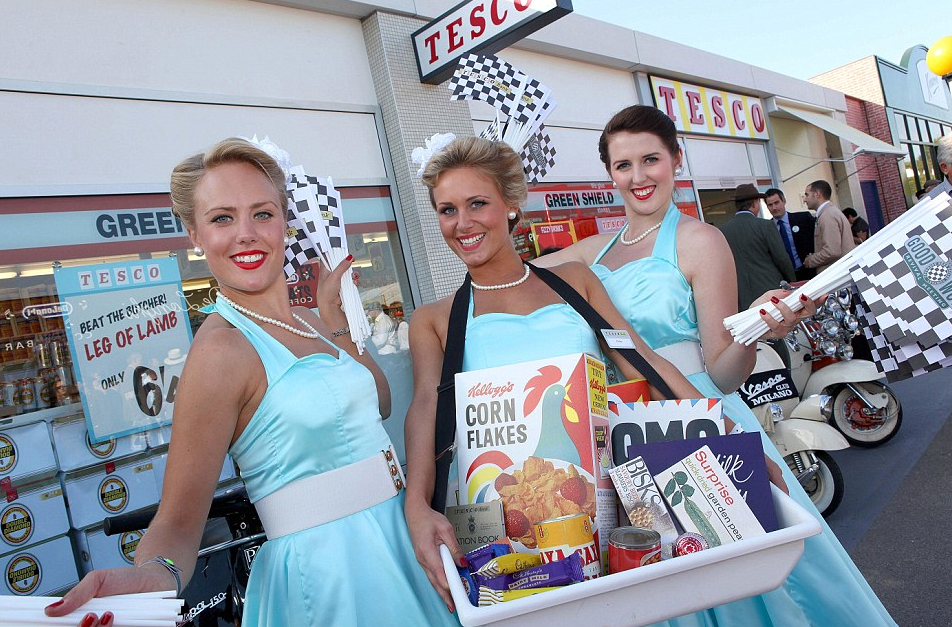 Checkout assistants dressed in vintage uniforms, completing the look with styled hair and makeup from the time. Classic products such as Colman’s mustard, Pears soap and Carnation evaporated milk were available to purchase, all of course in vintage packaging.

The event expects around 140,000 visitors, of which many wear appropriate clothing, and modern day vehicles are not permitted within the circuit perimeter. Celebs including Chris Evans and Christian Horner have previously been in attendance.

No it’s not a typo, a Wimbledon Morrisons branch was renamed ‘Murrisons’ for the duration of the tournament back in 2013. The circular piazza yearly gets changed into an ad-hoc Murray Mount with deck chairs, large screen and speakers to transmit the games live. 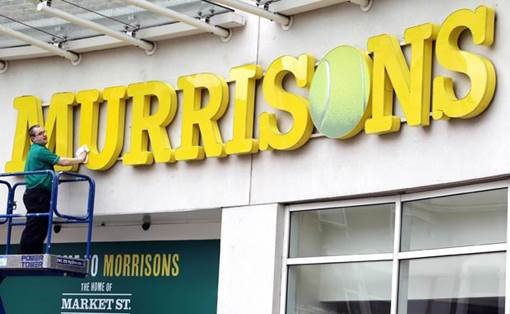 Shortly after Murray’s win, the branch had another makeover with workmen changing the sing to ‘Murriwins’, #champ.

This May saw Aldi open its first wine shop in Shoreditch’s Box Park during London wine week, they even took on a hashtag as the name – #Aldiwine. 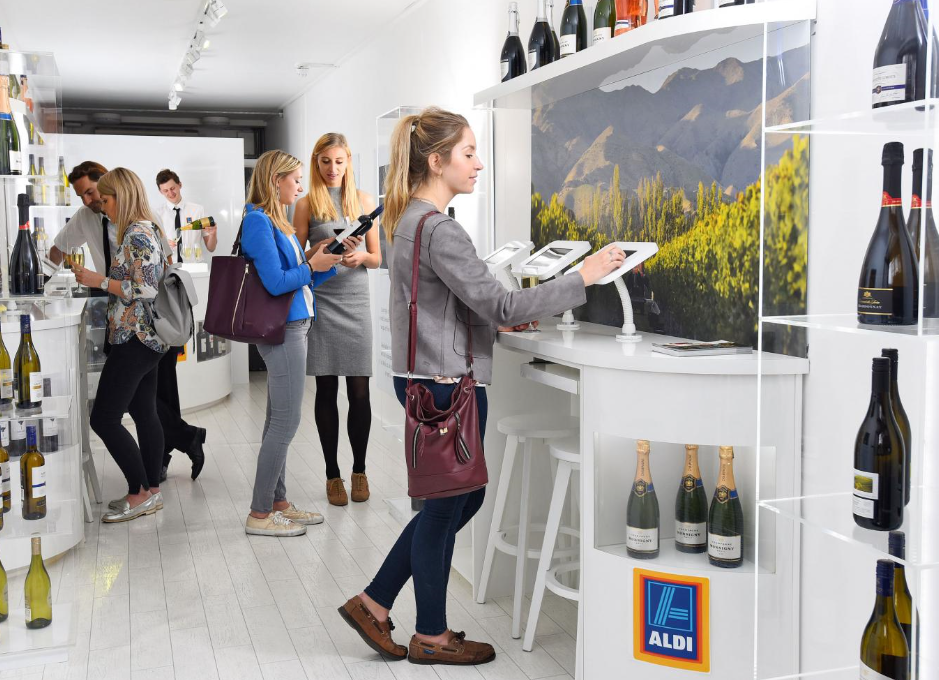 The pop up wine store for the trendy hipsters of the area offered wine tasting sessions and sommeliers, seeing as Londoners are said to have purchased the most Aldi wines overall. The high tech store, kitted with tablet stations allows drinkers to try before they buy with the assistance of wine experts, and purchase their favourite’s to be delivered to their door.

The pop up’s success will determine a potential new look for the supermarket across stores in Britain.

We had to include at least one of ours in here right? Taking a John Lewis foodhall by storm was a unique brand of customer entertainment from Sacla…