The Sherlock crew have taken subtle marketing to new lengths as only eagle eyed readers could have spotted the small addition hidden in the announcements page of the Daily Telegraph revealing the name of the unborn offspring of John and Mary Watson. The understated location of the news did not take long to explode onto the internet as fans pawed over the little information given, desperately searching for possible hints and clues to do with the hotly anticipated fourth season. And thus Rosamund Mary Watson has been launched into the Sherlock world. 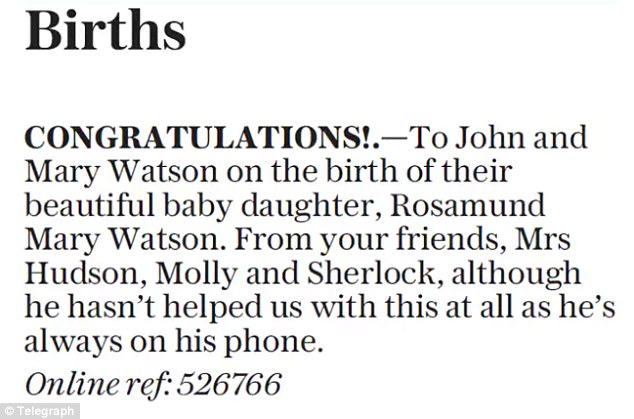 With the show’s clever and cryptic nature already well established the fans have been sent into overdrive grasping at possible meanings behind the post. Some theorised that the name itself may have been a nod to another character in the Sherlock universe as the initials are the same as Rachel Wilson, the still born girl featured in a Study in Pink. Others went a step further and engaged in historical research and discovered a Victorian figure who shared the same first and last names as the child. Both of these pieces of information however do not reveal anything and the name might just actually be a name and nothing more. A classic red herring, designed to tease.

The quote that seems to be getting every Sherlock fan in a frenzy refers to Sherlock’s new obsession with his phone and may be a running theme of the new storyline.  This may be perhaps due to Watson’s new status as a father as Sherlock has been shown to struggle with changes to the status quo and Watson’s changing priorities in the past.

It is again the lack of information that seems to be driving the arguably already fanatical fandom into overdrive as they eagerly await the first episode of the new series due to air on New Year’s Day. The information that we do have is that Sherlock will be battling with his inner demons following the infamous “did you miss me” final scene of the third series. Toby Jones has been cast as this season’s new antagonist as he threatens to reveal Sherlock’s deepest and darkest secrets to his nearest and dearest. As someone who has battled with addiction and is a self-confessed high functioning sociopath it will be interesting to discover what secrets he may still be harbouring. It is still unclear if Sherlock’s ultimate adversary Moriarty will make a magical re-appearance. However stranger things have happened on Sherlock already.

We shall all have to wait until 1st January 2017 to see if there are any truths behind the rampant rumour mill.

Seasons greetings from Tinder: the most swiped-right names of 2016