Text On The Beach? Britain’s 25 favourite beach reads in 140 characters.

London, UK – Wednesday 12th August, 2015 The traditional summer holiday beach read could soon be lost to history according to a new study which reveals the younger generation are no longer taking books on holiday but instead spending their time lounging by the pool using their smart phones.

The ‘Summer Speed Reads’ initiative was specially commissioned by Samsung Galaxy S6 edge following their new research which quizzed 1,500 Brits aged 18-25 years old on how they spend their time on holiday.

The survey found that FOMO culture could well sound the death knell for the traditional beach read – indeed a mere quarter (26%) of those surveyed had plans to read a book when away compared with 75% who admitted they would be regularly checking their mobile phones on holiday for social media updates in fear of missing out on any news or gossip from their friends back home.

Samsung teamed up with Professor John Sutherland, Lord Northcliffe Professor Emeritus of Modern English Literature, at University College London to lead the study which canvassed the nation to name the top 25 most popular beach reads of all time.

Once the results were back, the Professor was challenged to condense the top 25 most popular beach novels down to 140 characters for the ‘Summer Speed Reads project’.

WARNING! For those who like to read books the old fashioned way, be wary as the list below contains spoilers. 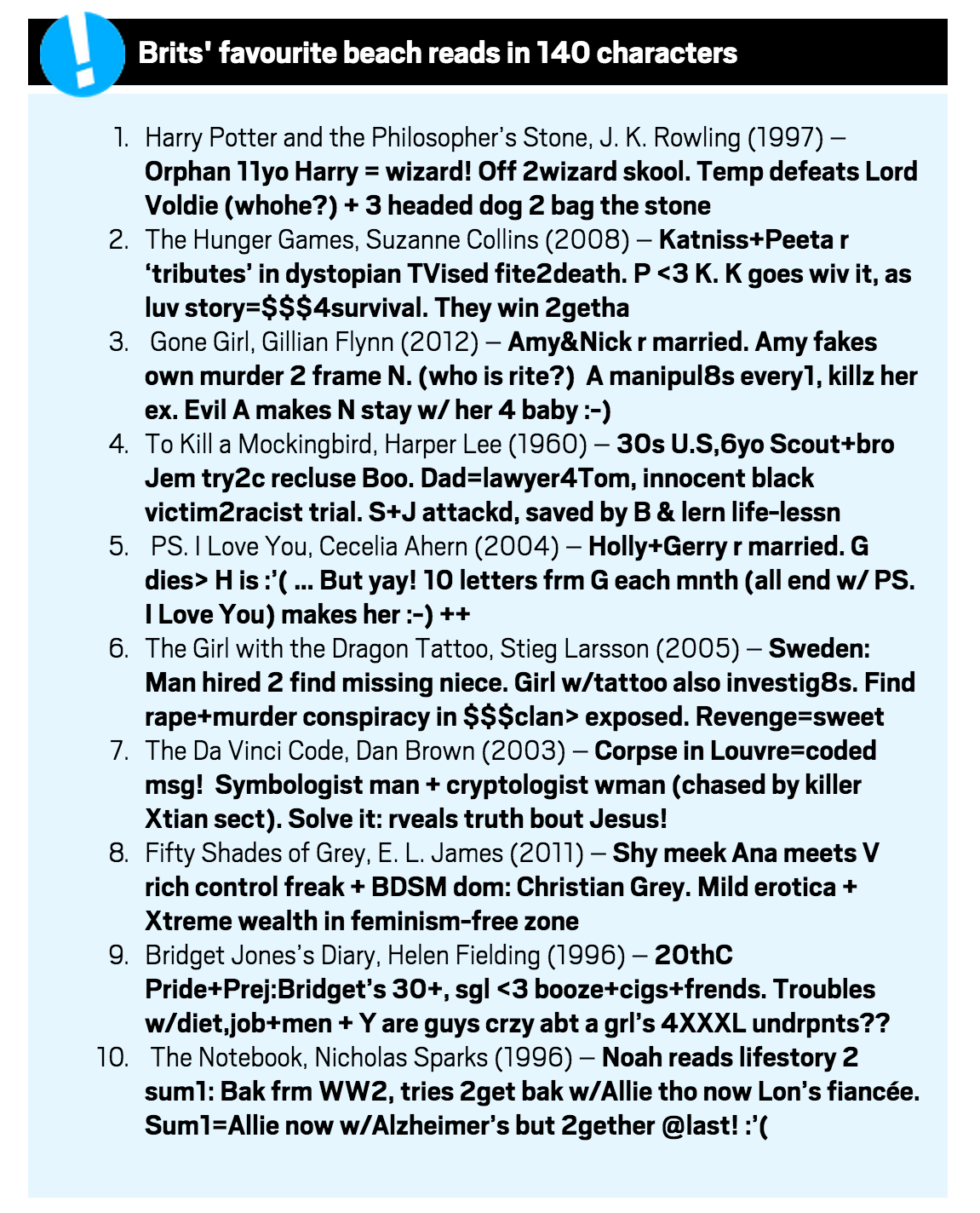 Professor John Sutherland, Professor of Modern English Literature at University College London and winner of the Man Booker Prize, commented: “The ‘Samsung Galaxy S6 edge Summer Speed Reads’ study provides us with a fascinating overview of how social media has affected young people’s ability to concentrate, even in the most relaxing of environments such as a holiday resort. In the future we will see short version novels as standard as people increasingly seek instant gratification whilst they multi task even when they are away on their holidays.”

“This breakdown of the 25 most popular beach reads of all time is the truest representation of modern day pulp fiction allowing today’s easily distracted young holidaymakers to enjoy the most popular summer books in an instant and who knows, maybe they may just inspire some people to pick up an old fashioned book at some point!”

Conor Pierce, Vice President of IT & Mobile at Samsung UK & Ireland says, “With the UK being one of the most connected smartphone markets in the world and with the rise of video, 4G and social media, people no longer want to be restricted to traditional holiday activities such as reading a novel. Customers that have switched to the S6 edge will find features like its quick launch camera, which launches in 0.7 seconds, is ideal for taking selfies on the beach or by the pool while its super AMOLED screen will give users the very best viewing experience when using it in the sunshine.”

The top 25 most popular beach reads are available to read here.

Not for the Faint Hearted: Daring Mission Impossible Obstacle Course