Paddy Power puts a jockey on the Uffington Horse.

London, Thursday 8th March 2012: Sightseers to the world-famous hill carving, the Uffington Horse, in Oxfordshire this morning were left gob-smacked to discover that the 3,000 year old figure had mysteriously acquired a jockey.

Reports are coming in thick and fast online already from the likes of The Sun, the Daily Mirror, the Daily Mail and The Daily Telegraph. 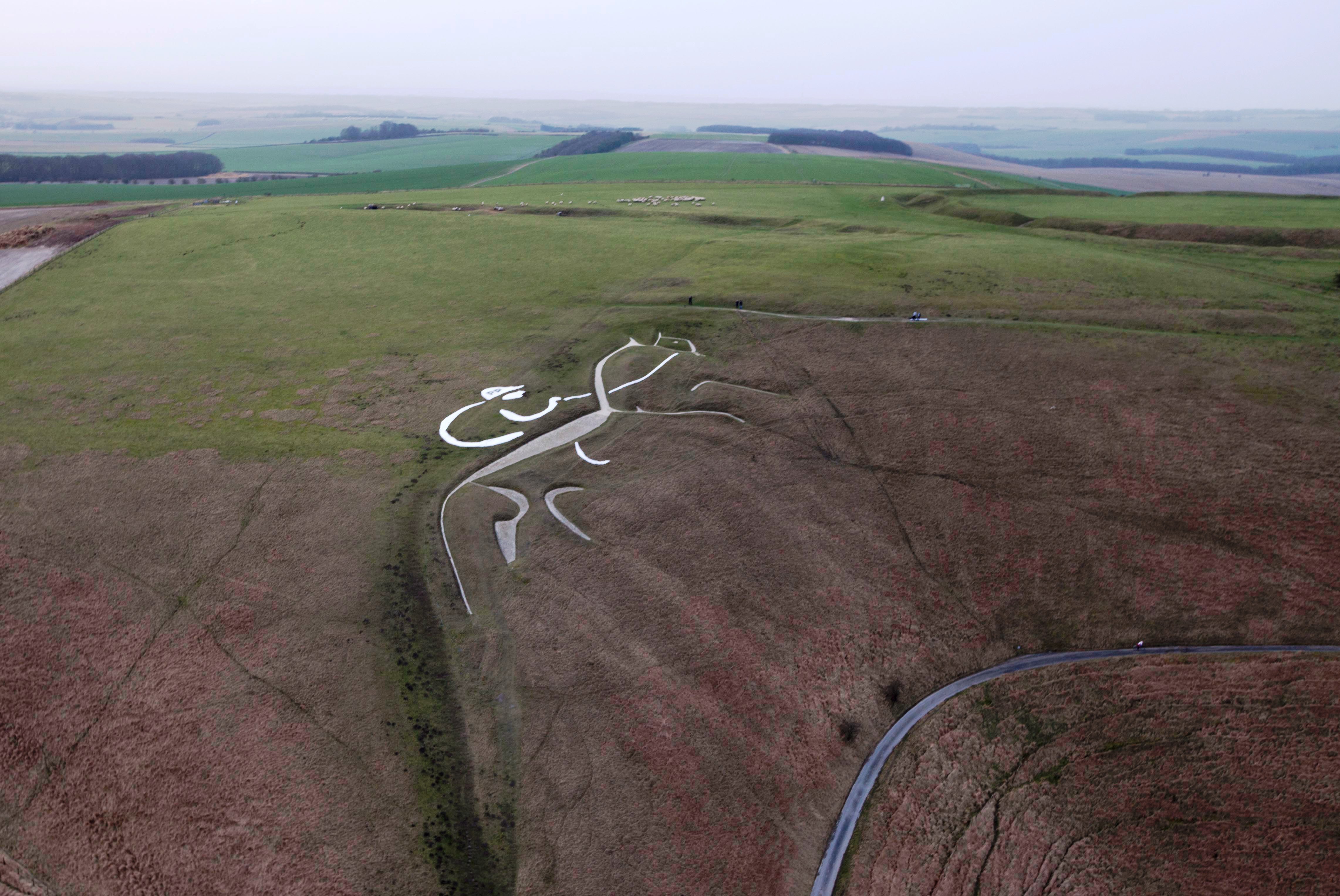 Mischievous betting firm Paddy Power have owned up to the audacious stunt as part of their “We Hear You” campaign with the objective of celebrating the imminent arrival of next week’s Cheltenham Festival in spectacular style.

The installation took place over a six hour period, under the cover of darkness, in the early hours of this morning just days ahead of this year’s Cheltenham Festival.

Over 200 metres of lightweight canvas, pre-cut into five separate pieces was used to create the 110ft  x 200ft  temporary installation.

It is pinned to the ground 5ft from the original chalk markings, using over 500 tiny tent pegs to ensure that the original site remains undisturbed. 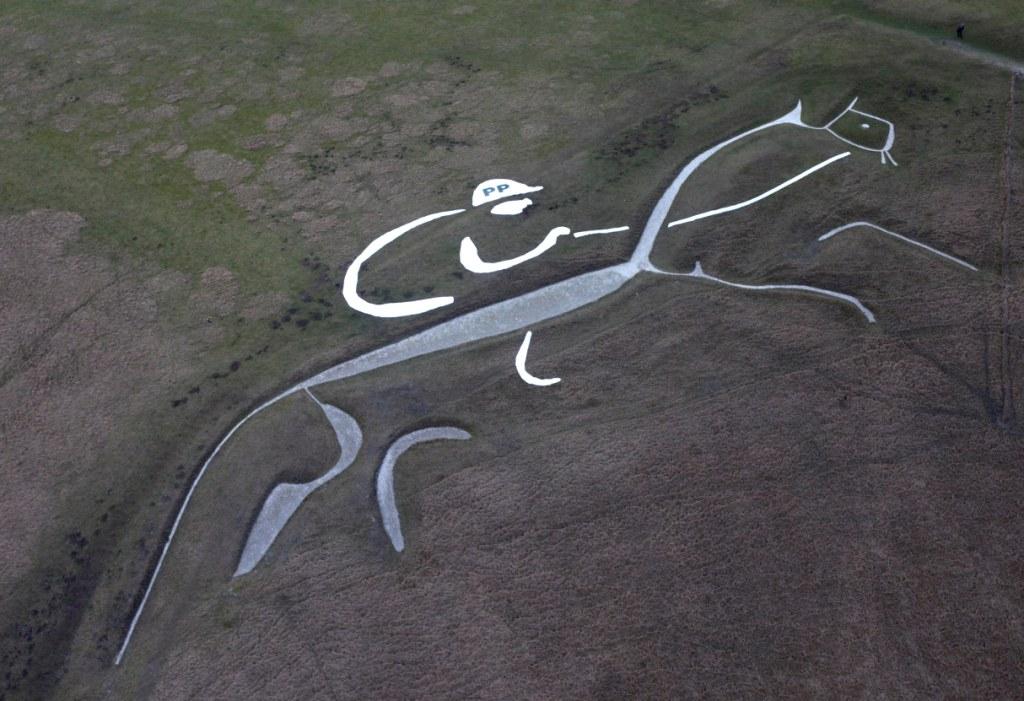 The striking new design, which is bigger than an Olympic sized swimming pool, can be clearly seen from the surrounding villages and is causing quite a stir. 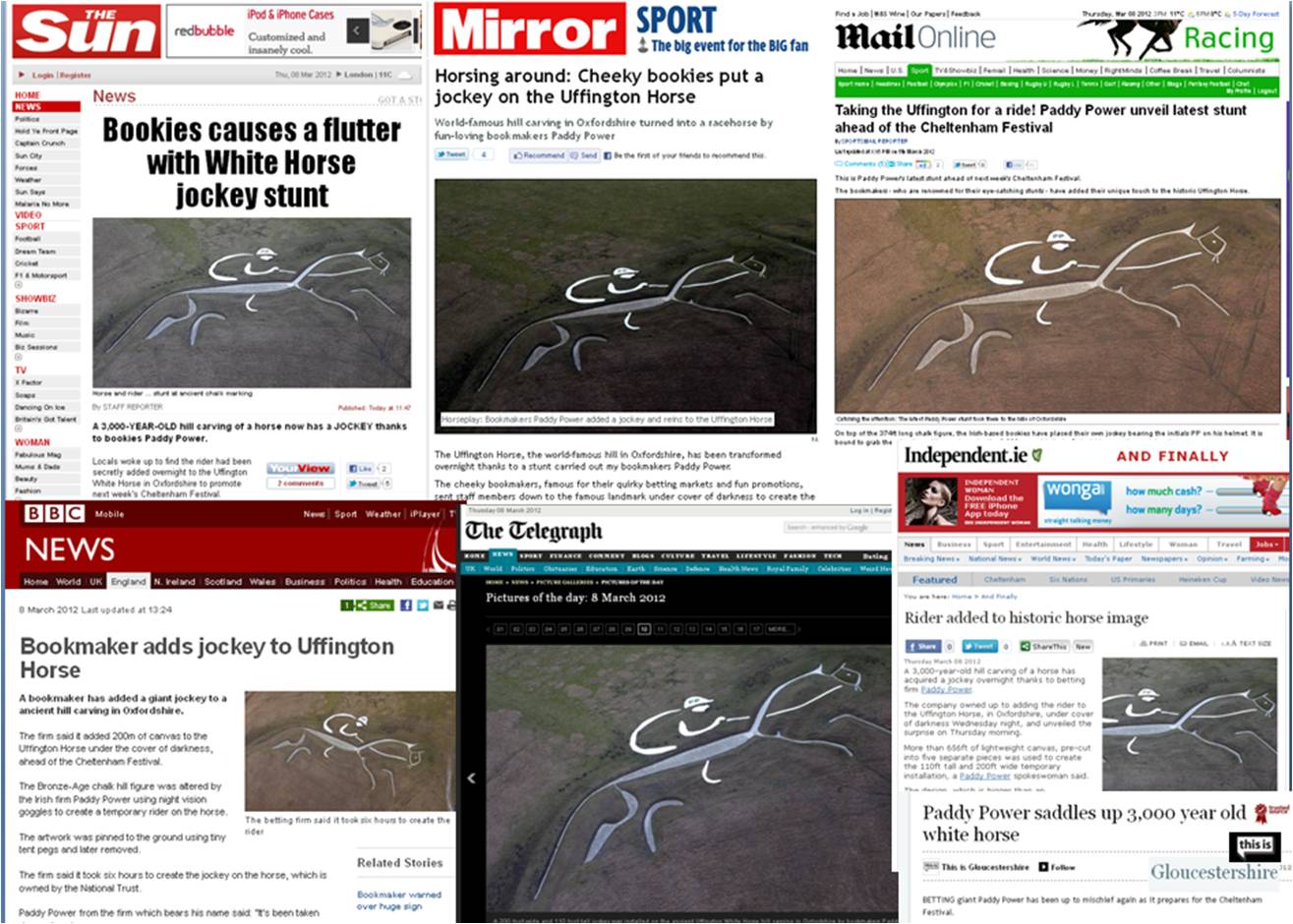 Paddy Power now hopes the Uffington Rider will become a site of pilgrimage for ‘lucky’ racing fans from all over the UK in the coming days before Cheltenham.

A spokesperson from Paddy Power comments, ‘Funnily enough the idea for our Uffington Rider came from a Tweet from one of our customers. He was responding to our ‘We Hear Campaign’ asking if we had any mischief planned for Cheltenham in the wake of our giant Hollywood sign a few years ago. We simply couldn’t resist the challenge and needed something spectacular to measure up to the giant sign. I think we’ve achieved this.”

Paddy Power has made a donation to National Trust.

Paddy Power is Ireland’s largest bookmaker and a leading provider of gaming services in the UK, Australia, France, Canada and Ireland. Founded in 1988 Paddy Power is a publicly quoted company and is listed on both the Irish and London Stock Exchanges (www.paddypowerplc.com).

About the Uffington Horse