PR campaigns very rarely take aim at one another. You might see a campaign get some coverage (or not) and have a quiet word to your colleagues about if you think it’s any good, but you certainly wouldn’t base your next campaign around exposing flaws in it. In fact most PR campaigns and companies will avoid other campaigns entirely.

Unless your competition calls you out.

Then it gets real.

Let’s set the scene; Burger King returned to France a few years ago and their marketing campaign has stemmed from the scarcity of its restaurants (fewer than 20 across the whole country), a real ‘quality over quantity’ campaign. They launched the ‘Whopper Move Out’ campaign, promising to pay for someone to move house so long as they move close to a Burger King, and digital billboards mocking those who don’t have one of the famous restaurants nearby.

The latter campaign didn’t go unnoticed by one of Burger King’s chief rivals. McDonalds erected this sign in response: 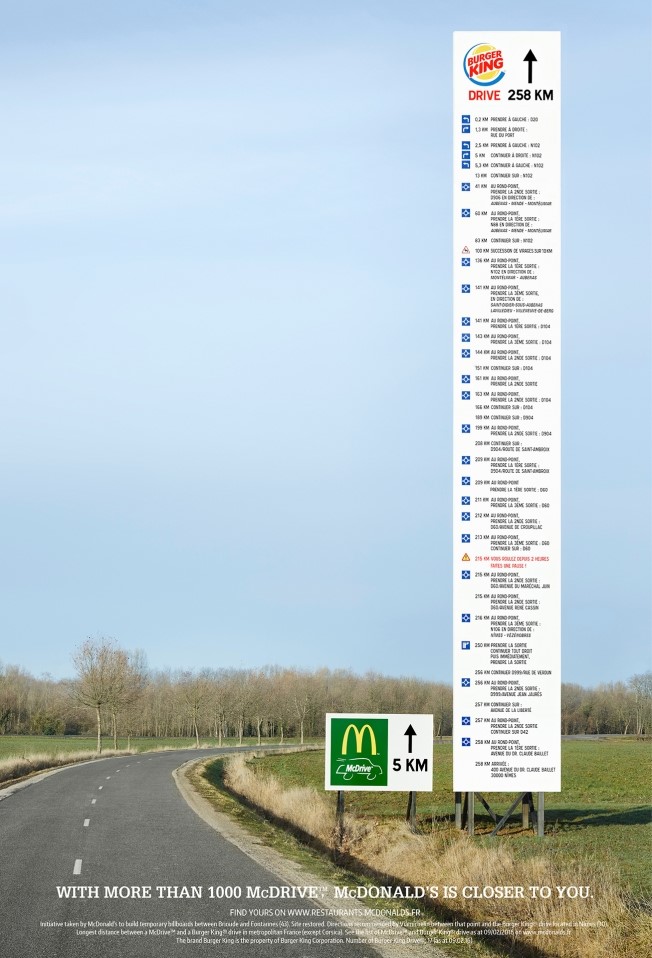 This is PR beef (excuse the pun) at its finest; McDonalds gave the precise directions for the closest Burger King in this remote town, a mere 258km away before pointing out how close the nearest McDonalds is.

Burger King had a choice. Reputation was in the balance. Do you accept the PR stunt for what it is, a light hearted jab at your own campaign, or do you respond to the affront with a campaign of your own. You can already guess what Burger King opted for:

This is how it’s done. We see the sign being erected, with people driving past clocking the distance to the nearest Burger King and McDonalds. One couple takes note and pulls into the drive through at their nearest McDonalds, before ordering only a coffee to keep them going for the long journey to Burger King.

Over 1 million views. Over 100 pieces of international online coverage. This spat shows no signs of slowing down, and we can’t wait to see what’s next.