Londoner rides the Tour de France on a Penny Farthing.

LONDON, April 2nd 2014: The cyclist who circumnavigated the globe on a penny farthing takes on his most gruelling challenge yet to promote the Tour de France arriving in London this summer.

To celebrate the Tour de France coming to London on 7 July 2014, Londoner Joff Summerfield (46) is undertaking a unique and gruelling challenge as he prepares to ride the Spring Classics road bike races on his very own penny farthing! 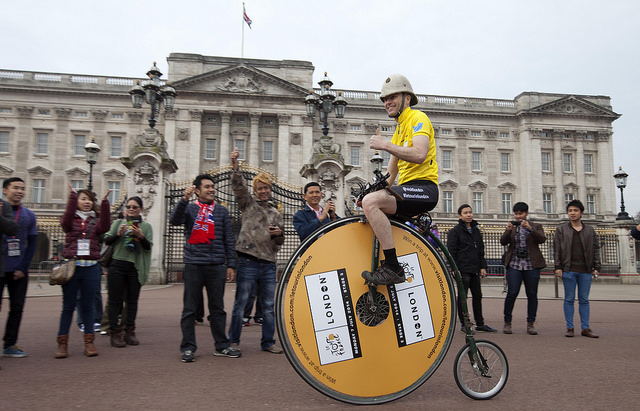 Summerfield rose to prominence in 2006 when he became the second person in history to circumnavigate the globe on a penny farthing, following fellow Brit Thomas Stevens who set off on his own incredible journey in 1884. The London-based athlete spent two and a half years travelling through 23 countries on four different continents riding a penny farthing that he built himself – but even that does not prepare him for the bone-shaking cobbles, steep hills and daring sprints that lie ahead. 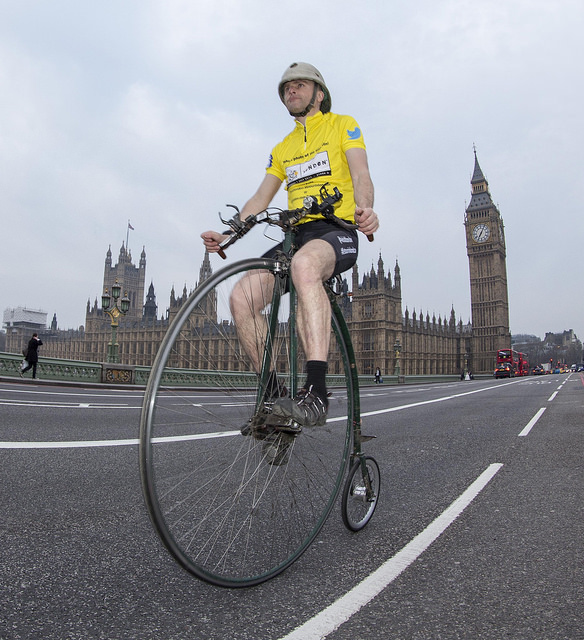 For his latest challenge, Summerfield and his high-wheel bicycle will attempt to ride the punishing short stage Sportives at some of the most famous one-day cycling road races in the world including the Tour of Flanders, Paris-Roubaix and Leige-Bastogne-Leige – all in celebration of the Tour de France Stage 3, which will see the world’s cycling elite take to the iconic streets of London this July. 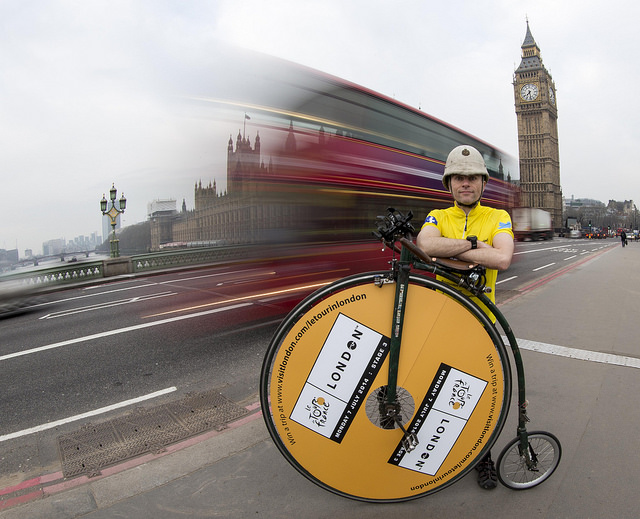 Joff Summerfield says, “The famous cobbled roads and the steep hill climbs of these European Spring Classics are going to test me and my penny farthing to the limit.  I am really looking forward to taking on these very challenging routes and meeting some of the pro riders along the way.  The Tour de France coming to London is going to be an incredible celebration of cycling. I’m proud to be doing my bit to inspire and invite people to come to the capital this summer to see the world’s cycling elite take to the city’s iconic streets, and perhaps go even further and take on the same route as the pros with RideLondon.”

Cycling fans are invited to enter a competition to win a trip to London to watch Stage 3 of the Tour de France by tweeting a picture of Joff on his penny farthing, themselves with our Tour de France picture board or on their own bicycle to @visitlondon using #letourinlondon or via www.visitlondon.com/letourinlondon.

Boris Johnson, Mayor of London, says, “Joff is a supreme athlete and we are delighted that he has taken on this exceptional challenge in celebration of London’s hosting of the Tour de France this summer. The penny farthing is the perfect metaphor for the Anglo/French rivalry we will witness in the Tour De France – even now no one can decide which nation invented the bike!’

“It’s absolutely fantastic to welcome back Tour de France to London.  The capital is fast becoming a beacon of cycling following the extraordinary triumphs of the 2012 Olympics and of course the inaugural RideLondon last year.  What could be better than watching top class pro cyclists as they compete in the world’s most famous road race, with our incredible London landmarks providing the breath-taking backdrop?”

The Mayor remains committed to ensuring London retains its status as the world capital of sport, but recognises the need for a balanced approach to ensure everyone can benefit from major events whilst keeping London moving. That is why he has set up a Major Events Oversight Board to assess and monitor the impact of major sporting events in the capital. This will ensure that any major events that we decide to host in our city will not only have a clear and demonstrable benefit to London, but also that any resulting disruption will be kept to an absolute minimum.

The Tour de France Grand Départ 2014 sets off from Yorkshire on Saturday 5 July and Sunday 6 July, with the peloton of 200 pro riders speeding into London via Cambridge and Essex for the finish of Stage 3 on Monday 7 July.  A million cycling fans are expected to line the route which takes in world-famous sites including Queen Elizabeth Olympic Park, the Tower of London, Big Ben, the Houses of Parliament and Westminster Abbey. The final stretch will travel through St James’s Park before a spectacular finish on The Mall in front of Buckingham Palace.

Spectators will be able to watch the elite cycling action along the route and also at three official Tour de France fan parks sites at Green Park, Trafalgar Square and Queen Elizabeth Olympic Park. The fan park sites will feature a wide range of different activities such as live Tour de France racing on the big screen, a French-style food market, a Tour de France Museum, interactive cycling activities, an outdoor cinema, live music, celebrity appearances and shops showcasing all of the latest bike equipment and accessories. Team London volunteers will also be on hand across all the fan park sites to help spectators with local travel information and directions.

On completion of his Spring Classics challenge, Summerfield plans to travel the world again in May this year – on his penny farthing of course.

Joff Summerfield is available for interview

The Tour de France comes to London on Monday 7 July 2014 (Stage 3) – for advice on where to stay and where to watch please go to www.visitlondon.com/letourinlondon