Hosted by Fern Britton, The Big Allotment Challenge celebrates Britain’s love of all things horticultural with a brand new series premiering this April on BBC Two.

In a walled garden within the grounds of Mapledurham House, Oxfordshire, nine pairs of passionate, knowledgeable amateur gardeners will put their green fingers to the test in a bid to be crowned Britain’s Best Growers.

Over six hour-long episodes, the series will challenge the gardeners’ horticultural know-how and skill as they plot, plant and prune their allotment to harvest a series of prize-worthy vegetables, fruits and flowers.

While two gardeners will ultimately be named the cream of the crop, the pair that fails to impress each week will hang up their wellies and leave the allotment for good. 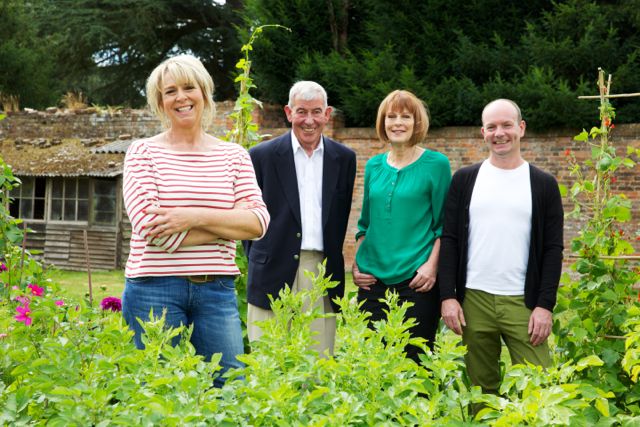 In every episode, the gardeners will face four challenges from a panel of experts, each an authority in their field.

The ‘Grow’ challenge will see the judges test the gardeners’ growing skills in producing prize-worthy vegetables or fruit.  The two ‘Make’ challenges will first measure their expertise in nurturing perfect flower specimens, and then their creativity with a surprise floral arrangement.  Finally, the ‘Eat’ challenge will assess their culinary know-how as they turn their produce into preserves and condiments.

Host Fern Britton, herself a keen gardener, says: “I’ve been gardening since I was a little girl, and I’m looking forward to learning more from our team of experts on ‘The Big Allotment Challenge’.  I hope that new gardeners will come to the programme and learn a lot from it, and seasoned gardeners will enjoy the judging and test their knowledge against that of our experts – the competition is friendly but fierce!”

Growing your own is an increasingly popular past-time in the UK, with over 350,000 allotments currently in use in Britain and a waiting list for an allotment up to ten years long in some areas.

The Big Allotment Challenge will see teams of best friends, colleagues, husband and wives, sisters-in-law and mothers and daughters from across the UK compete to win the title.  Some contestants have allotments, others grow their own produce in their back gardens, greenhouses, or even window boxes – but all are passionate about kitchen gardening.

Challenges include growing perfect radishes, unblemished aubergines and matching carrots and presenting the perfect single rose, colourful gladioli and uniform sunflowers alongside creating a topiary tree, a hand-tied bouquet and a summer floral wreath. The gardeners must also prove their capabilities in the kitchen by making jams, curds, chutneys and more using the produce from their patch.

Daisy Goodwin, Silver River CEO, says: “Anybody with an allotment will tell you that competition between allotment holders is intense.  ‘The Big Allotment Challenge’ has taken that natural rivalry up a notch.”

‘The Big Allotment Challenge’ book, which will accompany the series and contains recipes and top tips from the show’s experts, will be available from 10th April (published by Hodder & Stoughton, £20).

The Big Allotment Challenge is a Silver River production for BBC Two, executive produced by Daisy Goodwin and Melissa Brown for Silver River Productions and by Emma Willis for the BBC.

The Big Allotment Challenge airs on Tuesdays at 8pm on BBC Two from 15th April*.

After ten successful years on ITV’s This Morning, Fern has presented her own interview show for the past five years, BBC One’s Fern Britton Meets.  In one of her most famous interviews on the series, she spoke to ex-Prime Minister Tony Blair and led him to admit that he would have gone to war with Iraq whether or not they had weapons of mass destruction. Fern has been at the forefront of television news since the early 1980s, covering stories such as the Penlee Lifeboat disaster, the Zeebrugge ferry tragedy and the Falklands War.  She worked in the newsrooms of the BBC and ITV until the mid-1990s, when she became the first presenter of Ready Steady Cook, a format that was successful worldwide. She is married to chef Phil Vickery and has four children, two cats, a dog, chickens, ducks and pigs.  She is a keen gardener and makes a mean mint and apple jelly.

Jim is one of the UK’s leading gardening experts.  He was Superintendent of the Royal Parks for 25 years, and his clients have included Her Majesty the Queen and his old friend the Queen Mother.  Jim has been awarded the Victoria Medal of Honour, the highest accolade in horticulture, which can only be held by 63 people at any given time.  He was head judge for Britain in Bloom for 25 years, where he was nicknamed ‘Judge Dread’.  His love of gardening began as a school boy, where he was made to help out in the walled garden having been excluded from class.  Jim thrives in an outdoor environment and there is nothing he does not know about planting and growing.  His dedication to horticulture has seen him judge competitions all over the world and he says his greatest passion is sharing his knowledge with the public.

Jonathan has been working professionally with flowers for over twenty years.  His love of flora started at just eleven years old, when he received a greenhouse from his parents as a birthday present.  He soon started exhibiting and won his first competition at age twelve.  Jonathan is known within the floral industry for being innovative and creative with his designs.  He particularly enjoys nurturing new talent and regularly holds workshops and demonstrations in his current ‘residence’ at Chatsworth House.  Jonathan is former chairman of NAFAS Demonstrators Committee and has been selected to represent the UK in the World Flower Show in Dublin next year.

Thane is a leading cookery writer and teacher. With over thirty years of experience in the food industry, she can’t remember a time when she didn’t enjoy food. For twelve years she was a food writer for the Daily Telegraph, where she cooked with some of the most highly regarded chefs in the industry.  She then founded the acclaimed Aldeburgh Cookery School, which was rated as one of the top three in the UK.  Thane has published twelve cookery books, including Jams and Chutneys which has sold over 100,000 copies and has been translated into eight languages.  Her favourite thing to make is raspberry jam.

Londoner rides the Tour de France on a Penny Farthing