If Carlsberg did posters….

Hold the phone. No actually, on second thoughts, hold your glass – right under a beer tap conveniently placed in the centre of a new Carlsberg interactive poster.

That’s right people, Carlsberg are giving Londoners free beer with their latest ad based at the Truman Brewery, Brick Lane.

I know that @carlsberg want me to tweet this – but I can’t stop myself. Hats off pic.twitter.com/k7OCNv2Knk

Working with Advertising Agency Fold7 and design company Mission Media to create the billboard, the gutsy ad has labelled itself “probably the best poster in the world.” We are inclined to agree! What could be better than sun, shopping and a free pint? But get down there quickly, the barrel won’t last forever!

.@carlsberg have a poster that dispenses beer in Shoreditch right now… *mind blown* You’ve got till 6pm to grab 1! pic.twitter.com/OHPXFjPqXA

Ryan Newey, Fold 7 founder, added: “‘If Carlsberg did’ is an iconic property. Our challenge was to take something that is already so well-known and bring it to life in a way that will engage today’s consumer. Our ambition was to create the world’s best poster, and one that serves beer could certainly fit the bill.”

The party may not be endless, but if you’re not in the area today then fret not! Carlsberg marketing bosses have said the promotion will be rolled out across the UK to get the brand in front of as many beer drinkers as possible. 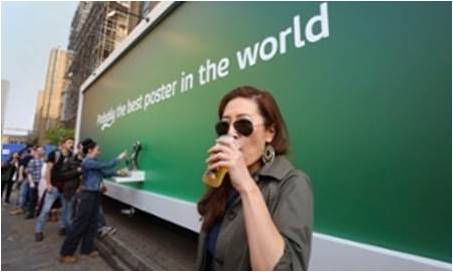 The Island With Bear Grylls