The Island With Bear Grylls.

PRESS RELEASE: In our world full of 21st century luxuries, few of us will ever experience what it is like to fight

for our very survival; to sustain ourselves using the hunter gatherer skills of our ancestors.

But in the second series of The Island With Bear Grylls, Bear conducts the ultimate survival

challenge on the smart-phone generation, and sets 28 Britons just one test: survive for six

weeks on an uninhabited island in the Pacific Ocean. 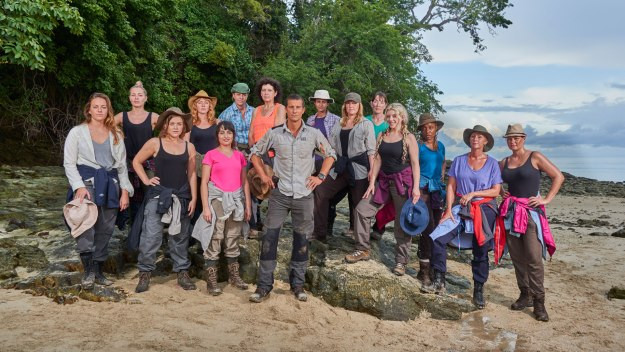 This year, that challenge returns harsher and longer than before. The “Islanders” not only had

to endure the torrential downpours and stifling humidity of the tempestuous rainy season,

they also had to cope for an extra two weeks; almost six weeks in total.

The series also returns with one fundamental difference; this year, both men and women are

part of the task with each sex inhabiting their own island within a remote Pacific archipelago.

After being whittled down from over 80,000 initial applicants, 14 male and 14 female

Islanders lived 25 miles apart, never crossing paths, in what will be an intriguing look at how

the different sexes handle all the islands had to throw at them.

The chosen few arrived by boat with just the clothes they stood up in, filming equipment,

from Bear and his team. Their one assurance was that there were sufficient indigenous

resources on the islands to sustain them, but only if they had the ingenuity to find and

Once Bear waved goodbye to the Islanders there was no hand-holding. After a tough swim

to shore, Islanders were left to battle the relentless elements, crippling hunger, extreme

exhaustion and the ever-present, real threat of their habitat. Their physical abilities and

mental strength were tested as they were forced to forage for and catch their food, light fires

With additional pressures to those experienced by the rest of the Islanders, they had to

juggle documenting life on the islands; each animal slaughtered and each fire lit, with their

own endurance of the same extreme conditions.

Could they survive without their 21st century comforts? Who is more resilient: the men or

the women? Will gender stereotypes be reinforced or pulled apart? But above all, do men and

The story of each island will be told in separate episodes. An episode of life on the men’s

island will be followed by an episode of the women’s island, each airing in the same week,

across seven weeks. A raw and exhilarating series, this is an authentic look at survival and

what it means to live in the 21st Century.

THE FACE OF MODERN TECHNOLOGY

If Carlsberg did posters...