Six miniature sculptures of Beatrix Potter characters, updated for the 21st century, have been unveiled in locations across London in celebration of the 150th anniversary of the author’s birth.

Peter Rabbit™, Mr. Jeremy Fisher™, Jemima Puddle-Duck™, Squirrel Nutkin™, Mrs. Tiggy-Winkle™ and Mrs. Tittlemouse™ were all given modern makeovers by renowned street artist Marcus Crocker and captured on film at sites including the Southbank, Westminster Bridge, St. James’ Park and Bond Street in the early hours of this morning. 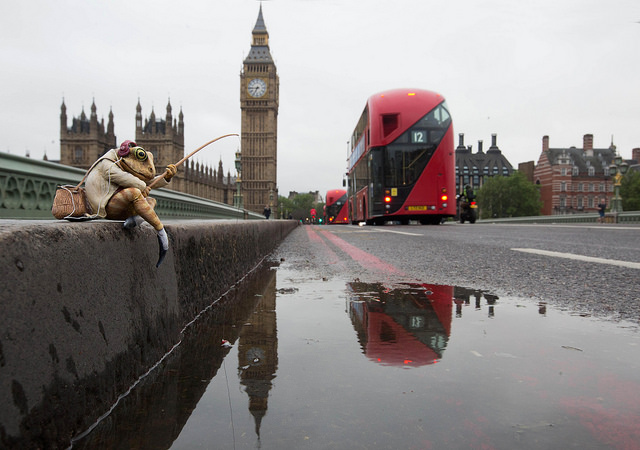 The tiny tributes, each of which took over 140 painstaking hours to create from start to finish, were specially commissioned by Penguin Random House to mark the milestone year. Each measures just 17cm or less high, with an average weight of 200 grams. 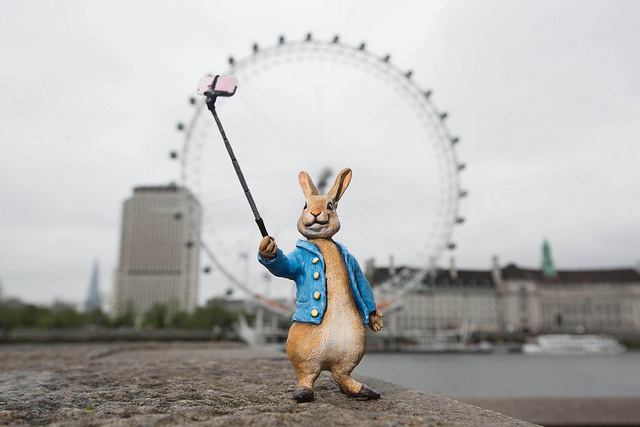 The reimagined small versions of the familiar characters reflect the diminutive dimensions of the original Peter Rabbit stories, whilst some also contain a nod to Beatrix Potter’s varied accomplishments as a Conservationist; Botanist; Businesswoman; Artist; Storyteller all of which made her a woman ahead of her time.  The anniversary year will celebrate all of these themes throughout 2016.

The figures were carefully crafted to ensure continuity with not only the characters’ own personality traits, but in some cases those of their original creator, in contemporary and surprising ways.

Crocker and the wider team began by brainstorming ideas, re-familiarising themselves with the original Tales of Beatrix Potter and thoroughly researching animal anatomy, exactly as Beatrix would have done, before sketching different levels of design from concept to final versions.

Each sculpt began with a wire armature base, before the main structure was created with air-drying clay through many intricate layers of sculpting and drying – a process which allowed for a high level of detail and accuracy. The figures were sealed and strengthened with waterproof wood glue throughout these stages, before being finished with acrylic paint.

Head of Licensing and Consumer Products at Penguin UK Susan Bolsover said: “In this milestone year we really wanted to do something unexpected to celebrate Beatrix Potter’s extraordinary legacy, and updating the narrative behind these iconic creations allowed us to produce a truly surprising result. Marcus has shown an extraordinary level of attention to detail, love and care when creating his small charges and we hope the public enjoy this interpretation of how the characters might have evolved throughout their adventures.”

Artist Marcus Crocker said: “Understanding the anatomy of each animal was very important to me – Beatrix Potter felt the same. Balancing this desire for accuracy against making sure each figure remained true to her work was a huge challenge, but a thoroughly enjoyable one, and I hope everyone enjoys the result.”

The figures will go on display at Waterstones Piccadilly for the month of July. To find out more about Beatrix Potter visit peterrabbit.com.

Peter Rabbit has taken to Twitter to narrate his #littleadventure, having escaped his Lake District burrow and travelled down to London by train. Follow his story @beatrixpotter on Twitter and see how the adventure unfolds.