Artist Alfie Bradley has created a guardian angel, a sculpture called ‘Angel of Knives’ as a monument to those who have been affected by knife crime. 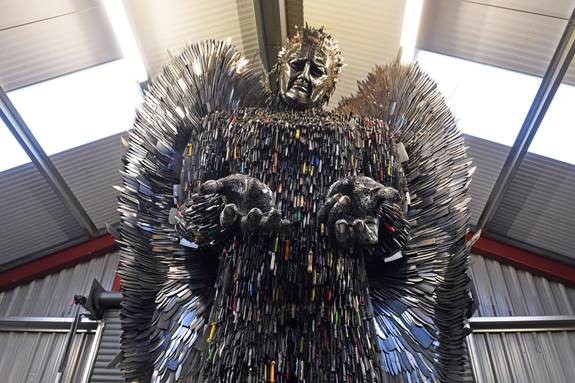 Bradley, who has previous artistic notoriety for creating a 13-foot-tall gorilla out of 40,000 teaspoons, decided on the creation of the sculpture in order to spread the message of anti-knife violence after his friend was stabbed.

The sculpture, which was constructed in the British Ironworks Centre at Oswestry, Shropshire has helped spearhead the knife amnesty and is over 27-foot-high, weighs around 10 tonnes and is constructed from 100,000 knives, collected from 43 police forces across the UK. The knives were sterilised and blunted before they were incorporated into the sculpture, with the sculpture taking Bradley over 18 months to complete. The face of the angel is a blend of Bradley’s father, grandfather, and great-grandfather.

The knife collection was part of a national drive in 2015 and 2016, called Save a Life, Surrender Your Knife, to raise awareness of the tragedy of knife crime. ‘Knife bins’ were placed around cities across the UK, where carriers were encouraged to surrender their knives anonymously (no CCTV and no names taken) with no repercussions.

The sculpture has had mixed reactions. Caroline Shearer, a mother whose 17-year-old son Jay Whiston was stabbed to death at a house party in 2012 said

“This is a sculpture of hope. I feel privileged to have my son’s name on it, as I do not want anyone else living our nightmare.”

However, Cheryl Evans, the mother of Warren Graham who died aged 18 after being stabbed 2004, “an angel is pure, a knife is the devil’s creation to the death of our young people and those who use it to end innocent lives… I will not and cannot support this, the fight begins. Maybe you have not lost a child so cannot see the deep-rooted agony this will cause.”

The sculpture will do a UK tour including the fourth plinth in Trafalgar Square and then find a permanent home in the centre of Manchester.

Sussex Police and Crime Commissioner Katy Bourne said: “The sculpture will be a very poignant reminder to us all of the victims of knife crime and it’s vital that we continue to raise awareness of the extremely serious consequences of carrying a knife.”

Smoke of the Day