Smoke of the Day. 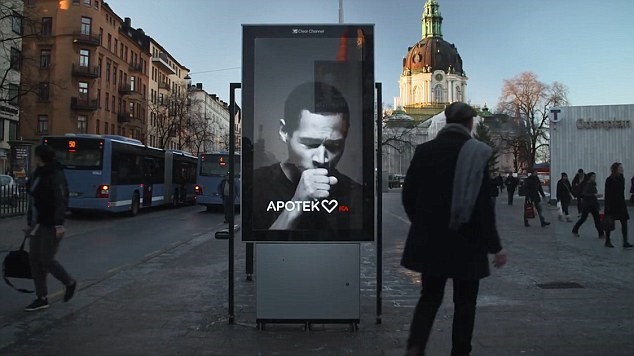 Regardless of the language you speak, there is no louder and clearer message than someone coughing next to a smoker. The pharmacy chain Apotek Hjärtat has chosen to apply this strategy to smokers who gather in one of the busiest places in Stockholm, to deliver their message about smoking awareness, loud and clear.

Ingenious or unpleasant, the new advert is making some noise, in every meaning of the term.
Indeed, to encourage people to refrain from smoking in public, the billboard produces nasty cough noises when somebody smokes within a fifteen-metre radius of it. The billboard is equipped with a smoke detector, and features a young man who starts coughing when cigarette smoke is detected. Once the on-screen man has finished making faces with an accusing look at the guilty person, ads for cessation products are displayed on the screen.

Only one billboard has been installed for the campaign, but the stunt filmed by Akestam Holst agency and uploaded on Facebook has had a noticeably bigger impact. The video has more than 380,000 views, reflecting the campaign’s significant impact on the Internet and especially social media.
Surprise and astonishment can be read on the faces of passers-by, proving that this campaign is definitively eye (and ear)–catching. But is it really effective?

Even if smoking addiction is getting to a record low, in 2014 78,000 deaths were estimated to be attributed to smoking. Comments on the video are varied, but many of them denounce the advert as a bad way to treat an addiction.

‘Believe it or not but we are actually aware of the risks when we smoke,’’ commented one of the viewers
This begs the question – is being rude or provocative really the best ways to change someone’s behaviour? If so, be ready to be yelled at by a billboard the next time your shirt doesn’t match your trousers.

Heinz Helps Us Fight The Cold With This Emergency Stunt