The signs that Hailo cabbies would LIKE to see on our roads.

LONDON, Tuesday 19th November 2013: : ‘Craters Ahead’, ‘Caution Texters’ and ‘Warning MAMILs’ (middle-aged men in lycra) Zone – the new road signs that London’s black cab drivers would like to see on city roads in the UK.

To celebrate Hailo, recruiting 13,500 drivers, the black cab app called upon ‘the knowledge’ of over 500 Hailo cabbies to identify the most confusing and outdated road signs which make up the Highway Code.

London’s biggest network of drivers then spent two months working closely with their drivers to create new signs that accurately reflect 21st century driving issues, which were brought to life by a designer. 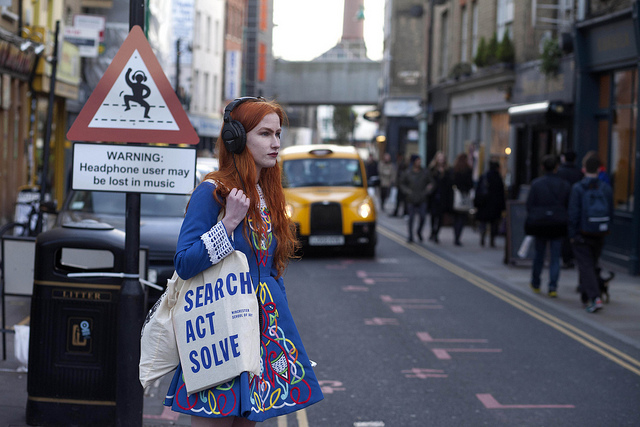 Cabbies fear a bumpy road ahead as over half (58%) call for warning signs announcing ‘Craters Ahead’ to be placed on potholed roads while 52% call for rickshaw warnings to be erected across UK cities because these man-powered vehicles slow down traffic.

In order to tackle school run congestion, cabbies recommend informative signs be placed near schools to warn drivers of traffic build ups between the hours of 8.00am – 10am and 3pm – 6pm (51%). 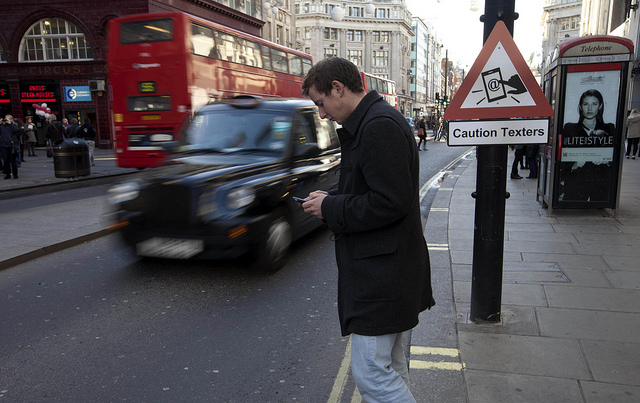 Instead of ‘beware cyclists, vehicles turning left’ signs commonly seen on the back of large vehicles, just over a third (36%) of respondents believe that this warning should be reversed to alert drivers of bicycles turning. 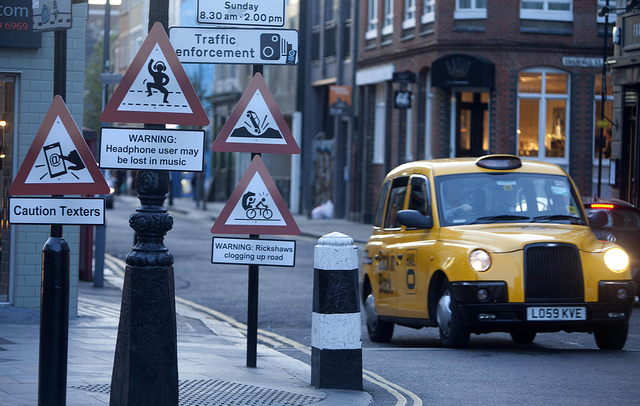 One in four cabbies (34%) said heavy headphone user areas should be flagged to warn drivers of pedestrians who enter a near trance-like state when lost in their music. This echoes findings by Maryland University (2012) which found that in the US the number of accidents involving pedestrians wearing headphones had tripled in the preceding six years.

Nobody likes middle-lane hoggers and a third of cabbies (30%) voted for a simple sign clearly labelling the lanes with the appropriate speeds ‘Fast, Medium and Slow’ to keep traffic moving.

Heavy mobile phone users should pay more attention to the roads and not their texts but just in case, cabbies have called for a ‘Caution Texters’ sign (26%) to be installed.

For a quarter (25%), UK landmark sites such as Buckingham Palace and Westminster should display ‘Caution Tourist Area’ signs to flag to drivers that tourists may not be as familiar with our roads, while for a similar number (24%) there should be a warning of MAMIL (middle aged men in lyrca) who often veer across lanes or ride two or three abreast.

Russell Hall, Hailo co-founder and cabbie commented, “Cabbies have their fingers on the pulse when it comes to road safety and city happenings, they are an authority on London’s streets – that’s why it’s important that we stop and take the time to reassess road safety and what works for pedestrians, cyclists and drivers alike to ensure we move with the times. The new road signs address modern day life – potholes are a common gripe of all drivers and something to be wary of on UK roads, similarly much more attention needs to be paid to cyclists on the road. Lifestyles play a huge part too from the school run drop off to the increased number of people carrying technology on their bodies these days such as headphones and mobiles.”

The top outdated and useless signs that cabbies would like to see removed from our roads is a medieval style picture of a horse drawn carriage which means ‘horse drawn vehicles likely to be on the road’ (71%).

TOP REASONS FOR SIGNS BEING OUTDATED

The drivers continued to pick apart the Highway Code, with the ‘migratory toad crossing’ causing concern because they felt it would cause bigger accidents if you stopped for a toad (56%).

Another sign cabbies find useless is the ‘Quiet Lane’ notice, which encourages drivers to continue their journey quietly and at a low speed in countryside terrain – 40% of drivers responded that this sign should be removed because they felt a ‘reduce your speed’ sign would be more effective.

The remaining top reasons given by cabbies for why the top ten existing road signs are outdated include:

• Level crossing without a gate or barrier– steam trains don’t exist anymore (37%)
• Car carrying explosives – should not happen anyway (37%)
• Ice sign – nearly a third (27%) said a sign can’t tell drivers the weather
• Soft verges for two miles – confusing sign, looks like you should mount the curb from the illustration (25%)
• Risk of grounding – a truck would not get stuck on a hill (24%)
• Quayside or riverbank – too late if the cars already half-way off the bank (21%)

The study also looked into Highway Code updates, with over two thirds (72%) of cabbies revealing that they would like to see no texting or social media updates included.

• No texting or social media updates behind the wheel – 72%
• When pulled over by the police, don’t stop immediately unless it is safe to do so – 58%
• Driving wearing shoes with heels over three inches should not be allowed – 44%
• National Speed Limit should be increased – 40%
• Driving bare foot should not be allowed – 38%
• Do not rely on google maps as a satellite navigation tool – 36%
• Hazard lights should not be used for parking purposes – 30%
• Stopping distances should be in measurements rather than timings (currently two seconds) – 29%
• Roof racks should be used to carry large objects (no large objects to hang out of the boot of a car) – 24%
• No flashing headlights to let someone pass as it confuses drivers and may not be safe – 16%

Cabbies also have some recommendations for pedestrians. Firstly, pedestrians should not cross roads while talking on their ‘phone (75%) and jaywalking, which is enforceable by law in the US, should also be enforceable in the UK according to over half of cabbies (55%). Furthermore, always get out of a car curb-side to avoid oncoming vehicles and knocking cyclists (63%) and remove headphones before you cross the road (63%).

Hailo is the evolution of the hail – a free smartphone app which puts people just two taps away from a licensed taxi, and lets cabbies get more passengers when they want them.