The origins of the first crisp sandwich are unknown, but today Subway® has announced a new role in its UK culinary team for a ‘Crisp Sandwich Sommelier’, in partnership with Walkers, to advise the British public on how to get their sandwich and crisp pairings just right.

Poppy O’Toole, a Michelin-trained chef and the ‘Potato Queen’ of TikTok, landed the top role as a result of her deep love of crisp sandwiches, her passion for finding the perfect flavour pairings and knowledge of techniques to achieve the most pleasing texture combinations.

Like many others, when Poppy lost her job due to the COVID-19 pandemic which swept across the world, her dream of being a chef was in tatters until she discovered TikTok.

Now 28-year-old star, known as the ‘Potato Queen’ of TikTok, has amassed over 2.1 million and teaches her fans how to make everything from crisp sandwiches to perfect roasted potatoes. 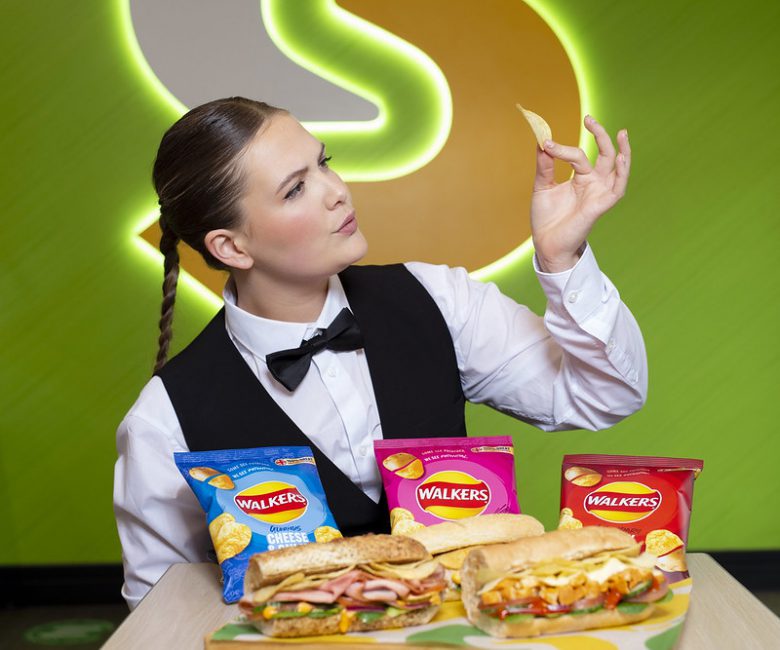 In her new role, Poppy will be making lunchtime visits to UK Subway restaurants to educate guests about the perfect Walkers crisps flavour combinations to add to their Subs as well providing expert advice on crisp layering techniques. She’ll be on hand to answer everything you need to know about adding crunch to your lunch.

The study was devised to identify key flavour compounds found in a list of iconic sandwich fillings and crisps, using flavour science and consumer testing by the British public to reveal the tastiest crisp sandwich combinations – based on their flavour, aroma and texture.

Dr Farrimond also shared scientific tasting notes for each combination, for crisp sandwich connoisseurs to use to enhance their overall eating experience.

‘Chicken tikka has a wide range of flavours that stimulate sweet, sour and umami tastes (a ‘savoury’ flavour sensation that also gives foods a more-ish quality) as well as spicy heat. The salty seasoning in the crisps enhances an already diverse bouquet of flavours in the chicken.’

‘The prawn cocktail flavoured crisps carry the piquant taste of Marie Rose sauce, which complements and accentuates the fish flavours of the tuna mayo.’

‘Both the meatballs and crisps are highly flavoured, with the crisps also elevating each bite by offering a textural contrast through additional ‘crunch’.’

‘Chicken, cheese and onion are a strong three-way pairing thanks to a plethora of shared flavour compounds. They taste very different, but because they share some flavour compounds, they harmonise well together and also stimulate umami taste receptors.’

‘Cheese is one of the most popular sandwich fillings for its unparalleled diversity of flavours. The vinegar brings added acidity, accentuating the subtle sourness of cheese and many of the ‘tangy’ tasting notes.’

‘The acidity of the vinegar in the crisps brings an additional sour dimension to a flavourful and texturally varied sandwich.’

‘The flavours of the cheese and onion crisps and the ham both stimulate umami taste receptors, complementing each other perfectly on the savoury side of the palate.’

‘As a low-fat meat, turkey works well when paired with stronger flavours, so the intensity of the cheese and onion crisps brings a more complex flavour sensation to the sandwich.’

‘The crisps add an additional crunch to what is a softer textured sandwich, with the simple, salted flavour of the crisps perfectly complementing the complex flavours of the salami.’

‘The flavours in this pairing are the same as the classic ‘surf n’ turf’, with the prawn cocktail flavours bringing even more depth to the rich notes of the steak.’

When analysing the results of the study, Dr Farrimond concluded that most sandwich fillings can be improved with crisps. Comments from testers in the study included “The crisps added depth to the flavour” and “The crisps add really great texture”.

Angie Gosal, Senior Marketing Director UK&I at Subway, said: “At Subway, we are serious about crisp sandwiches – and to bring this delicacy to a wider audience, we have appointed the world’s first Crisp Sandwich Sommelier in partnership with Walkers. Poppy O’Toole is the first person appointed to this new role and the goal is for her to share her knowledge for making perfect crisp sandwiches, so our guests can experience the joy of adding more crunch to their lunch.”

Poppy O’Toole, Subway’s Crisp Sandwich Sommelier, said: “I grew up eating crisp sandwiches and, back in the day, these consisted of crisps pressed between two boring pieces of white bread. But the crisp sandwich has evolved and is now a delicacy in its own right, so I’m both honored and excited to be accepting the job of Subway’s first Crisp Sandwich Sommelier in partnership with Walkers – imparting some of the flavour expertise and techniques from my Michelin training to elevate this humble dish and take it to a new level.”

Leading food scientist, Dr Stuart Farrimond, said: “Sandwiches are a much-loved lunchtime staple, but flavour-pairing theory and consumer testing has allowed us to explore news ways that we can elevate this familiar meal and boost both texture and flavour. Subway and Walkers briefed me to analyse the flavour compounds in iconic sandwiches and crisp flavours in this study, allowing us to reveal the definitive list of the tastiest crisp sandwich flavour pairings and hopefully give Brits some more lunchtime inspiration.”

Subway’s Meal Deals offer a choice of Subs, Salads and Wraps, as well as crisps or a cookie and a drink. Add Walkers Crisps to your Subway meal deal to create your own perfect crisp sandwich pairing now.

‘Wake and Bake’ this Easter with Maltesers Meditations