Smash hit TV show Storage Hunters has been given a scintillating audio-visual remix complete with a single which is set for release.

Award-winning comedy channel Dave teamed up with multi-talented British music producer Alex Ross to create ‘Storage Hunters (The Auction Remix)’, which will be available to buy exclusively on iTunes.

The euphoric floor-filler and accompanying music video has been specially commissioned to mark the premiere of Storage Hunters UK on Tuesday 28th October at 8pm. The brand new series sees presenter of the show Sean Kelly cross the Atlantic to travel the length and breadth of the UK to unearth the hidden treasures of the country’s disused storage units. 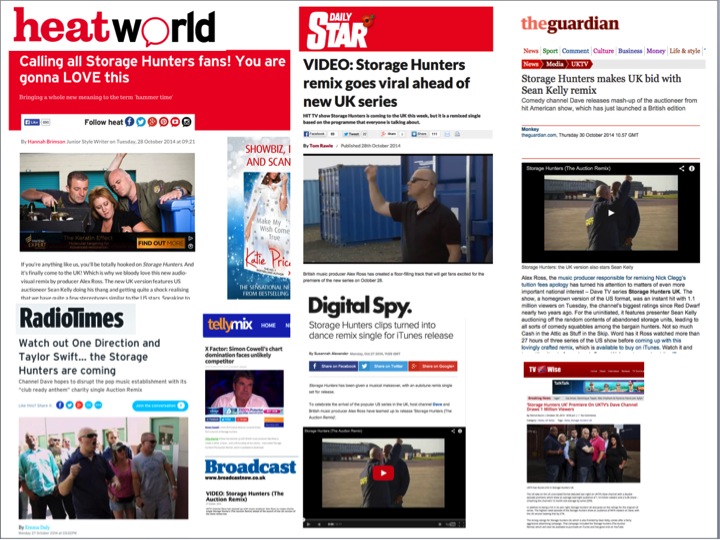 To celebrate the new series, studio whizz Alex Ross mashed up vocal snippets from the US and UK editions of the show with a pulsating funk-disco track. Sean Kelly leads the verses seemingly swapping the gavel and a storage lot for the microphone in a recording booth.

Known for his viral video and Top 40 sensation The Nick Clegg Apology Song: I’m Sorry (Autotune sensation), Alex stormed the iTunes chart in September 2012. To create this audio-visual masterpiece, Alex watched over 27 hours of footage from the three series of US Storage Hunters and the brand new UK series.

Alex says “I’m a huge fan of show. As soon as Dave briefed me, I knew I was in for a binge session of Storage Hunters so immediately agreed! After re-watching the old episodes I was itching to get into the studio to create what I think is a belter of a track which all Storage Hunters fans will love. All auto tuned, reminiscent of a Will.I.Am chart topper; the words and beats infuse with elements of rock, dance, funk and hip hop. A release all die-hard fans of this sensational show will adore.”

Sean Kelly adds: “People are always saying how much my bidding style sounds like a country and western song so the fact Dave has taken it a step further and created a club hit has turned my musical dreams into a reality. This could actually be a chart topper!”

By stripping out one liners from the show Alex was inspired to create the infectious hooks featured in this powerful bootleg edit.

Steve North, general manager of UKTV channel Dave, says, “Following the smash hit success of the US Show, we are excited to bring Storage Hunters UK to British screens this Autumn. I couldn’t think of a better way to celebrate this brand new series then potentially knocking the likes of One Direction or Taylor Swift off the top of the charts.”

This club ready anthem, The Auction Remix, is guaranteed to be a sure fire staple in many DJ sets across clubs nationwide. All proceeds go to UKTV’s chosen charity COSMIC. Let the bidding commence!

The single Storage Hunters (The Auction Remix) will soon be available to purchase exclusively on iTunes with the show starting on Tuesday 28th October.

Shoppers Are Climbing The Walls At North Face