Windsor, UK: Hundreds of pirates gathered at a theme park in Berkshire yesterday in an attempt to set a new world record for the largest pirate gathering, reports the BBC.

Legoland in Windsor hosted the bid to break the current Guinness World Record of 1,600 pirates held by Alton Towers. The stunt was to mark the opening of the park’s new attraction Pirate’s Landing. 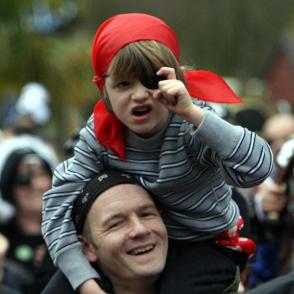 A spokeswoman for Legoland said the numbers were being verified by the Guinness team.

One When Saturday Comes blogger is not sure that the record attempt will stand up to scrutiny “I mean if there really is a World Record for ‘most pirates in one place’ they could at least send this Guinness World Record Spokesperson down to the Somali coast to check for accuracy.”

[Keeping tabs on the art of  promotion with this ’stunt of the day’ blog ….]