Cheltenham, UK: Bookmaker Paddy Power appear to have won the PR battle of the bookies of Cheltenham Festival with a mega billboard.

The colossal Paddy Power sign is claimed to be 270ft long eclipsing the previous world record holder which stood at 160ft long and also dwarfs the iconic Hollywood sign in Los Angeles. 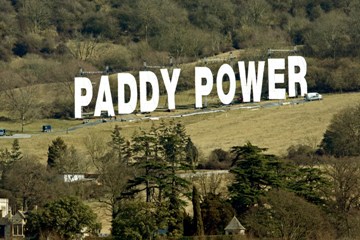 It also, controversially stands smack bang in the middle of one of Cheltenham’s most iconic beauty spots – Cleeve Hill.

The world’s largest free standing ad board in the world – is causing quite a stir during the race meeting. The planning department at Tewkesbury Borough Council is investigating whether it contravenes advertising rules.

A spokesperson for Paddy Power said: “Cheltenham is the biggest and the best race meeting in the world so we wanted to build a monument to reflect and celebrate that.”

Source: This Is Gloucestershire

[Keeping tabs on the art of  promotion with this ’stunt of the day’ blog ….]

Bare Your Wardrobe for Charity

The Lady and The Revamp