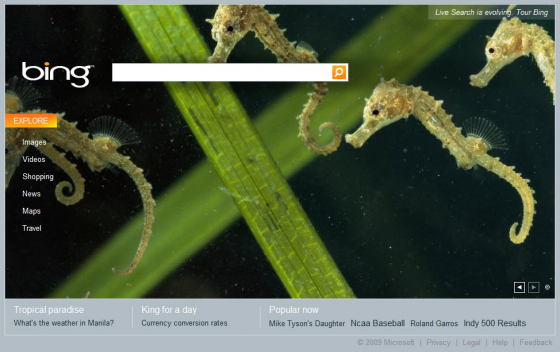 Proving how serious Microsoft is about its new Google-challenger Bing, the company has just launched a $100m ad campaign. Billed as a decision engine rather than a search engine, the site is well worth checking out. Although Bing is due to stay in Beta phase for the next six months, the battle between these two giants is going to get very interesting.

Check out the ad here:

A Site We Love – Platform

It was Platform’s amazing Julie Burchill interview that first caught our eye, but each article we subsequently clicked on delivered a healthy dose of humour and exuberance. Dazed and Confused have described it a site for “young people of every kind who want to get their pop culture fix without being patronized”. The site aims to celebrate youth culture and does so magnificently.

Habbo Hotel released the findings of an interesting survey this week, looking into teenagers’ favourite online brands. The top five sites for girls don’t come as much of a surprise:

The boys’ list is a little more interesting however:

Numbers 4 and 5 are the interesting ones here – primarily because they are so popular with the teen audience, but largely unknown to most other people.

Runescape – the most popular free Massively Multiplayer Online Role-Playing Game in the world. Similar to World of Warcraft, but free to play, the game enables players to create and control a character in the virtual world of Gielinor.

The Advertising Standards Authority recently found cause to object to a viral campaign carried out for the launch of the Metrodome film ‘Shifty’, which encouraged users to ‘stitch up’ a friend by sending a spoof message, purporting to be from the police, about alleged drug use. The friend would then, after the shock of receiving such an email, learn of the trick, and be directed to a website about the film.

Perhaps understandably the ASA have decided this was sailing too close to the wind, as the rules dictate that when handing over friend’s emails for such activity, the user MUST have permission. Obviously this ruling does not go hand in hand with the basic ideas of viral marketing, and it will be interesting to see how this recent decision may impact on future campaigns.