The giant statue pays homage to the dramatic scene that set viewers’ hearts racing and was named the most memorable British TV drama moment of all time in a recent survey.

The sculpture, which was specially commissioned to celebrate the launch of UKTV’s new TV channel Drama, caused a stir amongst passers-by this morning as well as local wildlife. 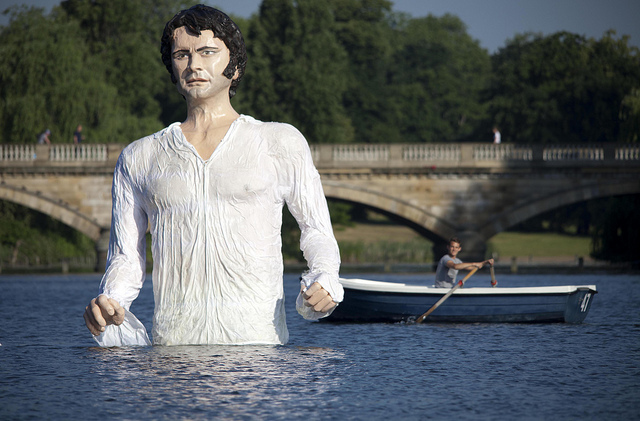 The installation of Mr Darcy in The Serpentine (which was one of the most fashionable places to promenade in Jane Austen’s era) celebrates the iconic scene from the 1995 TV adaptation of Jane Austen’s acclaimed 19th Century novel Pride and Prejudice, which was published 200 years ago in 1813.

The model, which is made from fibre-glass, took a team of three sculptors over two months to design, construct and paint.  The giant sculpture of Mr Darcy’s head and torso measures 12 feet, equivalent to the height of a double decker bus. 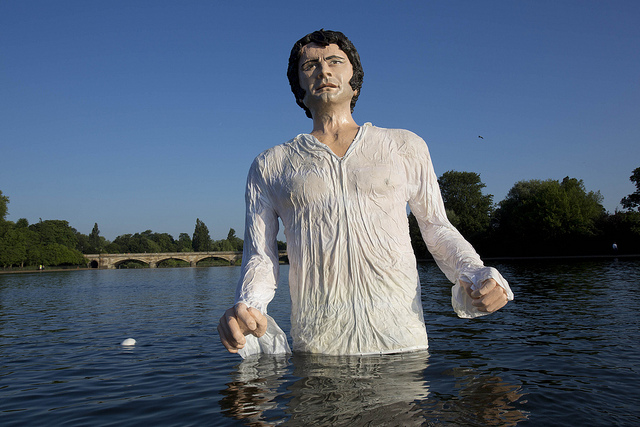 Lead sculptor Toby Crowther says, “We took Colin Firth’s famous lake scene as a starting point for creating Mr Darcy but we also read the book and looked at performances of the brooding hero by Matthew Macfadyen, David Rintoul and even Laurence Olivier.  The challenge for us was capturing the spirit of Darcy as handsome and noble but also aloof and proud.  The Mr Darcy sculpture is a real mix of the many portrayals of Jane Austen’s most famous hero.”

The homage to Mr Darcy is set to embark on a short regional tour, taking in Scarborough beach, before it is installed at Lyme Park in Cheshire, where the now infamous scene from the BBC drama was first filmed.  It will remain in place in the lake at Lyme Park until February 2014.

Adrian Wills, General Manager of UKTV channel Drama says, “The giant Mr Darcy in The Serpentine is a fitting tribute to one of the most memorable moments in British TV drama.  Jane Austen spent a lot of time walking in Hyde Park and along the banks of the Serpentine so we would like to think she would have approved of our new dashing Darcy. Our new channel is committed to screening the very best British dramas, offering viewers the chance to watch much-loved moments including Mr Darcy’s wet-shirted confrontation with Elizabeth Bennett following his lake scene.”

Drama is a brand new TV channel from UKTV, bursting with British dramas and showcasing an array of famous faces.  Launching on 8 July 2013 and available free to all UK viewers, Drama will air a diverse range of critically-acclaimed shows featuring stellar talent, many of whom have gone on to join Hollywood’s elite. Drama can be found on Freeview channel 20 and Sky.