Video: free for editorial use

Hammerheads, blacktips and sand tiger sharks could be heading to UK shores and may inhabit our coastal waters in the next 30 years according to new research released today.

The new study to celebrate Sharkfest on Nat Geo WILD, reveals Britain’s current and future shark population. It predicts that with the rise of sea temperatures and the impact of climate change we could see non-indigenous species of sharks from the Mediterranean making their way to the British coastline by 2050.

The new ‘Shark Map of Britain’ released today estimates that there may be currently over 10 million small sharks and 100,000 larger sharks in British waters, as well as some 40 different species, including Thresher, Basking and Nursehound sharks. 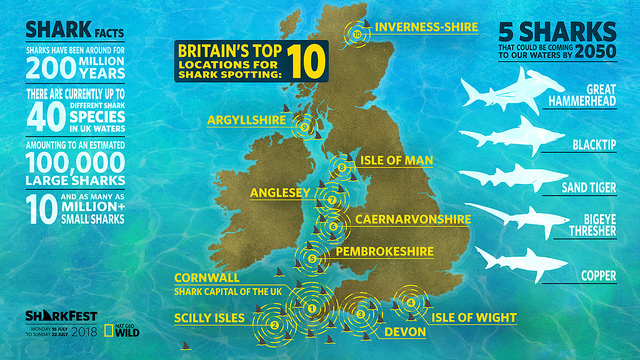 “It’s likely we will be seeing more sharks spread from warmer regions such as the Mediterranean Sea towards our waters in the UK over the next 30 years. These include the likes of Blacktips, Sand tigers and Hammerheads, which are currently found swimming off the coasts of Spain and Portugal.”

The ten new species of sharks that could inhabit British waters by 2050:

Cornwall has been named as the UK’s current shark capital with at least 20 species found off the coast, followed by the Scilly Isles and Devon. 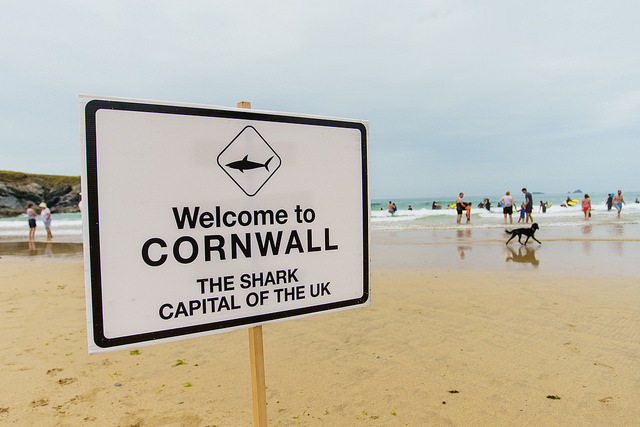 Current species indigenous to our waters such as the Basking, Thresher and Nursehound are declining in numbers due to over-fishing and other pressures so need to be protected, says Dr Collins.

Dr Collins added: “There is considerable debate as to whether we have Great White Sharks in UK waters. I see no reason why not – they live in colder waters off South Africa and have a favourite food source, seals along the Cornish coast. The only argument against there being Great White Sharks in our waters is that numbers worldwide are declining so the chances of seeing one around the UK fall year by year. Though while the potential number of shark species around the UK may increase in the next few decades, the overall number of sharks (especially the larger ones) will fall as a result of overfishing, plastic waste and climate change. It’s really important we work together to prevent a premature extinction of these wonderful creatures.” 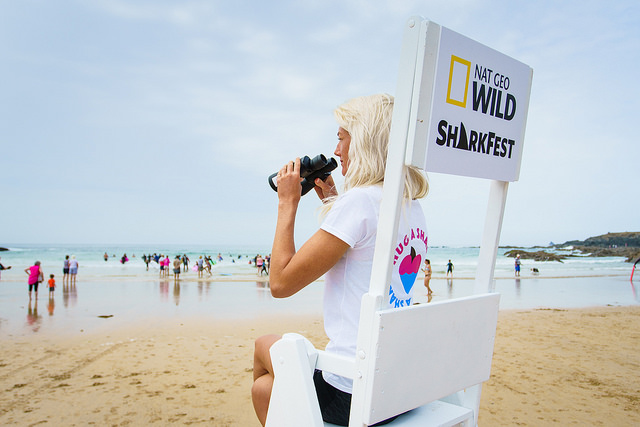 Nat Geo WILD installed shark information points on Treyarnon beach in Cornwall this week to educate beach goers about the array of amazing marine life in our ocean and dispel myths about sharks.

A Nat Geo WILD spokesperson commented: “Nat Geo WILD loves sharks! For too long these magnificent creatures have been portrayed in a strictly-one dimensional way, as terrifying predators.  Sadly, now many species are under threat. That’s why we are bringing viewers Sharkfest, a whole week of fin-tastic shark TV. We follow the top scientific researchers as they dive down into the deep, discovering unseen shark behaviour never before caught on camera, and revealing the true awe-inspiring nature of sharks.”

In a survey of 2000 British adults by Nat Geo WILD to celebrate Sharkfest, it was found that four in ten Brits admit to suffering an irrational fear of sharks while swimming in the sea.

And with a potential infiltration of sharks on the horizon, more than three quarters of Brits think we’re likely to see shark surveillance and prevention techniques, such as shark nets and shark spotting drones, being used off British coasts in the future.

Despite there being 40 different species of shark currently passing through British waters, more than half of British respondents can’t name more than two types of shark, while 11% can’t name even one shark species. Meanwhile, over 8 in 10 Brits think sharks have been given a bad reputation by the Hollywood film industry.

Nat Geo WILD’s Sharkfest, the number one destination for incredible shark shows, is back this year to raise awareness about the fascinating and thrilling nature of sharks.

This year Sharkfest kicks off with 700 Sharks, which follows the largest school of sharks in Polynesia, as a team of international scientists study them at night when they’re most aggressive. The brave team are rewarded as they capture incredible new behaviours never seen before or caught on camera.

This is followed by Shark Vs. Tuna, which depicts a clash of oceanic titans, breaking down why sharks are the apex oceanic predator.

Finally, Big Sharks Rule reveals expert insight as to why the world’s biggest shark species congregate in one region called “shark central” off the coast of South Africa.