Download the video [HERE]
Images free for editorial use [HERE]

A bold new initiative promising to bring relief to the residents of Ascot has been unveiled today following a spate of alcohol-fuelled brawls at race meetings.

Paddy Power’s ‘Drunk Tank’ service will provide temporary accommodation for up to 50 racing fans to sleep off the booze in clear-sided 6 x 2 metre container mounted on a lorry.

Members of staff will cart drunks off the streets of Ascot in wheelbarrows, before transferring them into the tank. The custom-built unit features a hydraulic tail lift for ease of loading.

Following recent events, the Irish bookmaker unveiled the ‘The Drunk Tank’ ahead of Royal Ascot (tomorrow) in a bid to avert a rumble at Britain’s most prestigious race meeting.

Last week, racecourse bosses announced that punters could be breathalysed or refused admission as part of a crackdown on brawls that have recently marred meetings at Ascot and Goodwood. 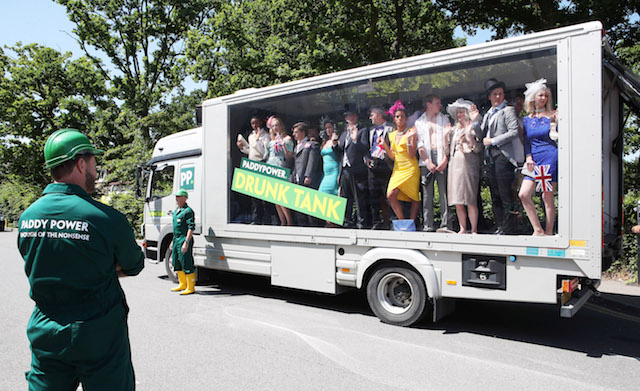 Paddy Power today shared video footage of staff participating in a training exercise, as they prepared to tackle tanked-up toffs and inebriated city types with ease and professionalism. 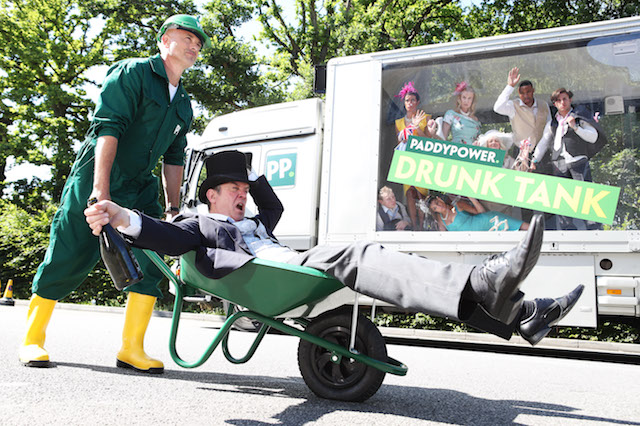 New research by the bookmaker revealed that over eight in ten (85%) of British racegoers agree that horse racing events need to do more to stop alcohol fuelled drunken bad behaviour. Over a staggering four-fifths (88%) also admitted that their racing experience had been ruined by booze-fuelled bad behaviour and drunken antics.

The public service initiative, which Paddy Power are providing at no cost to residents (or drunks), aims to clear the streets of blottoed race-goers and assist the inhabitants of the quaint Berkshire town.

A national poll of 2,000 British racegoers commissioned by the company also revealed that eight in ten (80%) of those surveyed have actively shunned high-profile racing events to avoid drunken fisticuffs and catfights.

The research also revealed that respondents found City boys (59%) to be the worst group of racegoers, followed closely by Hen/Stag do’s (54%) and Toffs (41%).

The top five worst things to witness during a day at the races, according to those surveyed were: 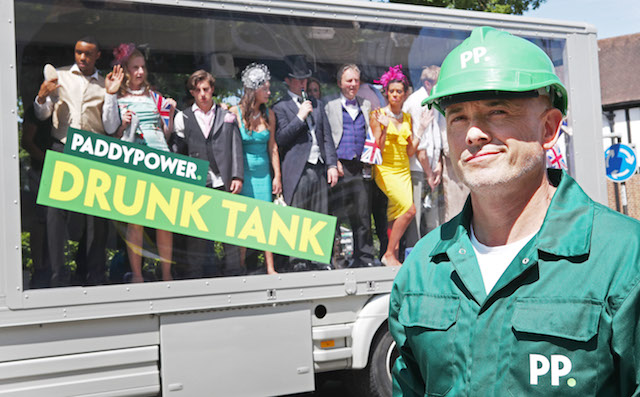 Paddy Power said: “Every year we watch thousands of dapper gents and glamourous ladies descending on Ascot. But the mere whiff of a Prosecco cork seems to set them off. By the second race they’re rolling around the Royal enclosure like wild animals. Our Drunk Tank team will be patrolling the streets of Ascot to ensure the drunks don’t spoil things for residents and decent race-loving folk.”

Record-breaking jockey and Paddy Power racing ambassador Ruby Walsh said: “I’ve been shocked by the scenes of violence we’ve seen at racing events recently. It’s not something you want to see on a night out let alone a day at the races. There’s no place in any society for that kind of behaviour to be honest.”

Paddy Power estimate an industry-wide figure in excess of a staggering £100 million will be wagered during Royal Ascot. In the festival showpiece, the horse Order of St George aims to reclaim his title in the Ascot Gold Cup on Thursday for Irish challenger Aidan O’Brien, while Sir Michael Stoute’s Stradivarius will strive to lower his colours.

The campaign was devised and executed by PR and creative agency Taylor Herring with Paddy Power’s in house team.

The spot was produced by the agency’s new production arm St Marks Studios.

The film was written and directed by James Herring with Jon Brooks.