Images free for editiorial use HERE

The special issue, on sale on July 25th, immortalises David in the comic strip alongside the ‘Bash Street Kids’ and characters from his best-selling children’s books, ‘The World’s Worst Children’.

The comic will also feature Moe; a brand-new character exclusively created by Walliams, who debuts in a new strip called ‘Moe’s Monkey Feet’. Loosely based on the comedian’s son, the story sees Moe using his amazingly dextrous feet to play pranks on other notorious Beano characters. 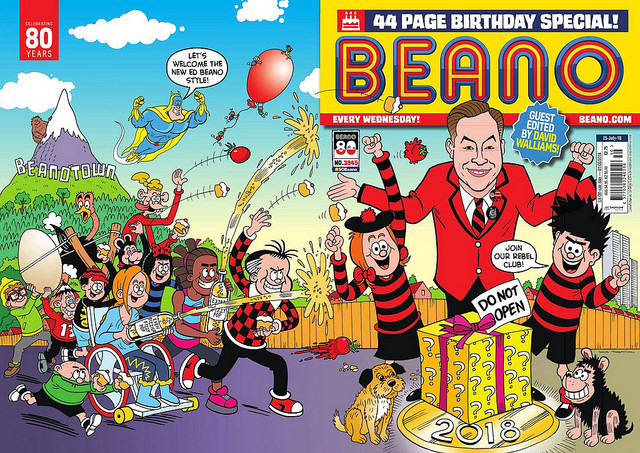 As well as writing his own comic strips, David commissioned a special BeanoTown adventure, featuring legendary characters Dennis & Gnasher, Minnie the Minx and Bananaman, who all team up to defeat an out-of-this-world visitor. The strip also nods to the comic’s 80 years of success, by including iconic characters like Lord Snooty, Tin-Can Tommy and Pansy Potter.

To accommodate all of David Walliams’ ideas, extra paper had to be ordered so the birthday issue could be expanded into a 44-page bumper edition. The special celebratory front cover sees Walliams himself appearing in Beano form, with Dennis, Minnie the Minx, Gnasher and David’s beloved dog Bert.

Writing in the Editor’s letter, Walliams said: “What I always loved about the Beano was that it felt naughty. It was a comic that you should read under the duvet with a torchlight. I don’t think I’d have got into writing my books without Beano. When coming up with characters for my TV shows and books, I’d imagine them all as larger than life characters, much like the ones in Beano. The comic is quintessentially British and as long as there are children who like to laugh there will always be a place for the Beano.”

He added: “I was thrilled to be invited to guest-edit the Beano, I felt rather giddy sitting in the Editor’s chair helping to create storylines and introduce my new character to the comic’s fanbase. As an official member of the Fan Club, as a child I’d wear my Dennis and Gnasher badges with such pride, so it’s great to hear that it’s making an overdue comeback! All that’s left for me to say is Happy Birthday to the best comic in the world!”

Emma Scott, CEO of Beano Studios said: “It’s fantastic to work with David Walliams for our 80th Birthday bash – he’s brilliantly Beano – embodying the daft and rebellious nature which for 80 years has entertained kids and parents alike. On its 80th Birthday, Beano is more relevant than ever, spreading much needed cheekiness and inspiring kids to just embrace being kids, whether it’s on our award-winning Beano.com, in our hit TV shows and the world-record breaking comic. Here’s to the next 80 years!”

David Walliams guest-edited the celebratory issue in exchange for a donation to YoungMinds, the UK’s leading charity fighting for young people’s mental health. Beano Studios is supporting YoungMinds’ work to engage children about their mental health across its platforms. The 80th anniversary comic also sees the debut of another new character, called Mandi. Developed with YoungMinds, Mandi’s story sees her encounter everyday issues that can create anxiety or stress in children.