London’s choking: The little grey plaque that names and shames streets high in NO2 pollution.

The house where Wolfgang Mozart wrote his first symphony or the flat of a visiting Vincent Van Gogh: to the average passer by these little nuggets of history might go overlooked but for the installation of the now iconic blue plaques by English Heritage. Each instalment proudly displays each areas hidden gems from times gone by but now little grey plaques have been popping up around London to bestow upon areas a much more sinister and unwanted accolade.

Air pollution; it has been an issue in the Capital since Victorian times with the infamous Pea Soup fog known to engulf the city in a thick grey shroud. But with modern technology the danger now lurks unseen, even as the levels of Nitrogen within the air creep higher, beyond the legal limits and are now more frequently the cause of a myriad of health issues for its residents.

To try to raise awareness of this invisible threat to tens of thousands of Londoners, Joe Dennett and Rob Donaldson came up with the idea to recreate a grey replica of the little blue plaque, carrying the phrase “London’s choking”, to name and shame the streets and houses in areas where air pollution directly threatens public health. 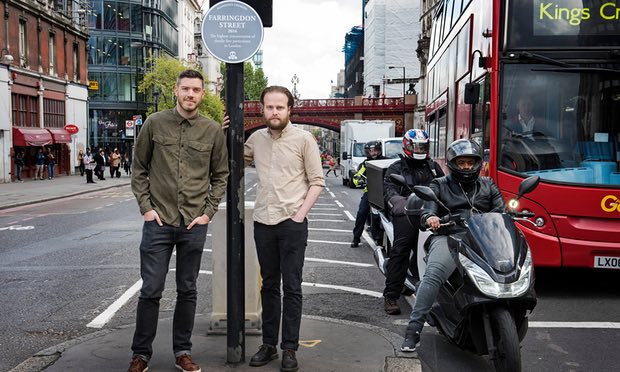 The pair said of their scheme, “We wanted to try and create awareness and anger about it at grass roots and to come up with something that would identify the air pollution. The English Heritage blue plaques highlight the invisible past of a building and this is trying to highlight the invisible danger of the pollution in the areas where the grey plaques are being put up.”

Oxford Street, less polluted than in 2013 due to electric buses, still has illegally high levels of pollution #airquality #londoncleanair pic.twitter.com/l3OiqF7xNR

So to those streets we say that it is time to clean up your act or face the shame of the little grey plaque.

NIKE REALLY IS ONE STEP AHEAD: Virtual LED running track brought to life