Free images for editorial use HERE

NEWS! Hundreds of people at London Luton Airport were treated to a spectacular festive surprise, as they witnessed the world’s first Christmas light show to feature a 120ft aircraft.

easyJet provided an A320 Airbus to airport ground staff who created the spectacular festive experience by wrapping the aircraft with Christmas lights. 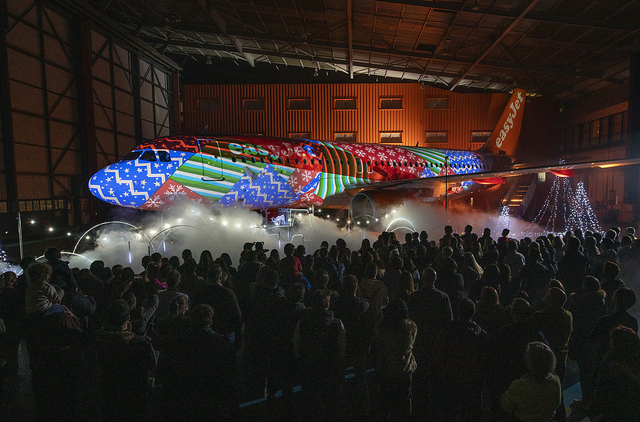 The lightshow left the audience in awe, as they observed the Christmas light switch-on, as festive projections and lights synced to the sound of a contemporary remix of Tchaikovsky’s Dance of the Sugar Plum Fairy.

Over 850,000 choreographed light sequences and 1.5 miles of LED micro bulbs were used to create the unique Christmas switch-on.

The team of 10 special effects artists and lighting designers, spent four weeks working to design and create the light show ahead of the big reveal.

London Luton Airport and Europe’s leading airline easyJet, collaborated to bring Christmas cheer to hundreds of airport staff who have been involved in the expansive, three-year redevelopment of the airport, which increases the annual capacity of the airport to 18 million passengers by 2020. 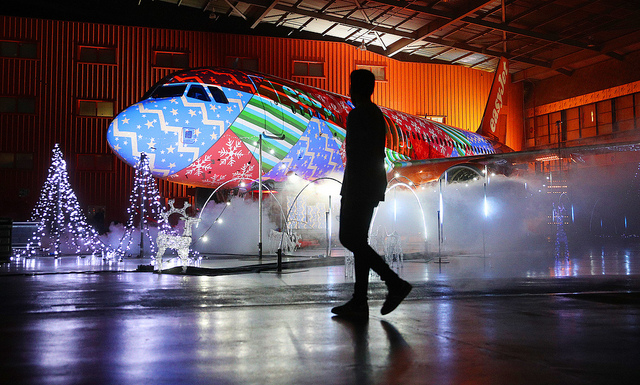 The £160 million regeneration project will add £1 billion to the UK economy and an extra 10,000 jobs by 2030. The Christmas light show is part of the airport’s 80th anniversary year celebrations. 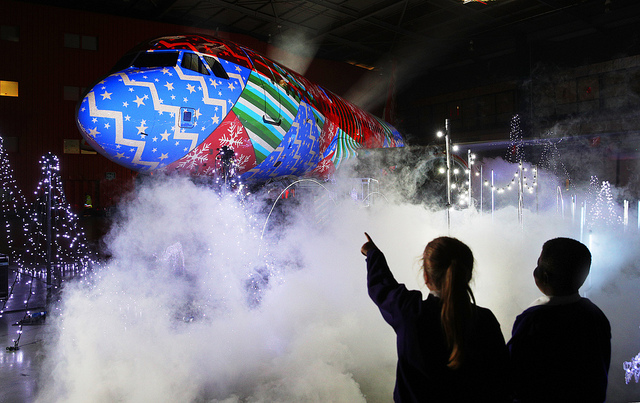 Local children from Chantry Primary Academy and Whitefield Primary School were invited to the big unveil, as 9-year-old Maddy Simonite kicked off the festive display by switching on the lights for the first time. Maddy Simonite, said: “Switching on the lights made me feel like I started Christmas! I’ve been to see the Oxford Street Christmas lights but this was ten times better!”

Airport ground staff painstakingly covered easyJet’s 5,000sq metre aircraft hangar in Christmas lights and decorations. The team were given just 24 hours to create the festive transformation ahead of a grand reveal to an audience who watched the stunning moment a 120ft aircraft was illuminated in light.

The festive surprise took place as easyJet and London Luton Airport prepare for one of its busiest Christmas getaways. Over three and half million passengers will be taking to the skies with easyJet to be reunited with loved ones this Christmas.

Neil Thompson, Operations Director, London Luton Airport said: “As we reach the end of our redevelopment – the largest in the airports 80-year history – we wanted to extend a huge thank you to staff and customers and give them a special Christmas gift. Our team were given just 24 hours to dress an entire aircraft hangar and easyJet A320 Airbus plane before guests were treated to a dramatic Christmas lights switch on.”

Tina Milton, Director of Cabin Services, easyJet said: “Most people who work in a regular office get to partake in festive decorating, so we laid down the challenge to ground crew to create the most spectacular light show featuring a plane. We were delighted to work with London Luton Airport to help get the festive feeling started amongst our staff and the local community in Luton.”