Laugh your way to a six pack.

Watching sitcoms and laughing out loud can help people to lose weight and get a washboard stomach to die for, all from the comfort of a sofa.  That’s the verdict of a new report that reviews the academic research into the effects of laughter on the human body and provides detail of a laughter based workout. 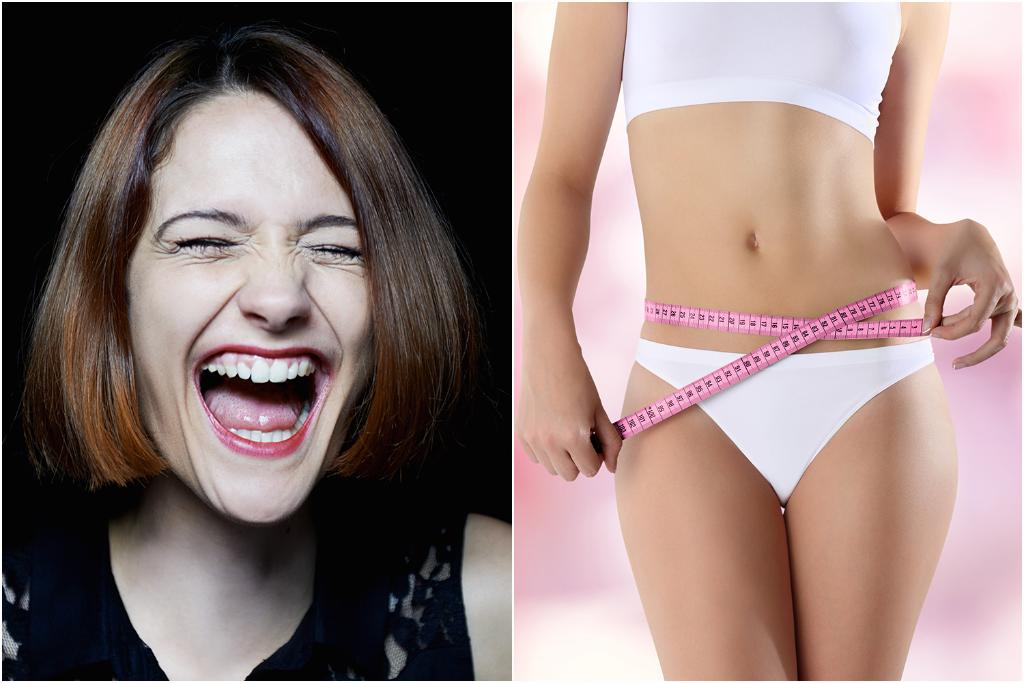 Entertainment TV channel Dave commissioned Dr Helen Pilcher and Timandra Harkness from the Comedy Research Project, an independent group that researches the science behind laughter, to come to the aid of comedy fans who may be giving up on New Year diet and fitness plans by now (61% of 1,500 Brits surveyed admitted they would be).

Using the latest research in the field of gelotology (the science of laughter) Pilcher and Harkness produced a report and devised two new fitness plans for Dave’s Laughter Workout that use belly laughs, giggles and chuckles to exchange a Christmas muffin top for a leaner, meaner six pack and a laughter-filled life.

Laughter is an aerobic activity that has previously been shown to burn calories (Miller and Fry 2009). It’s estimated that 15 minutes of laughter per day can increase total energy expenditure by up to 40 calories (Buchowski et al 2007).  Pilcher and Harkness identified five different intensities of laughter; ranging from ‘The Howler,’ where laughter is intense, involuntary and uncontrollable, to ‘The Snigger,’ where joyful snorts signal a positive reaction to a comedy scenario, and estimated the calories associated with each different type of outburst. They went on to predict the calorie loss that could be achieved from laughing at a number of different comedy shows. 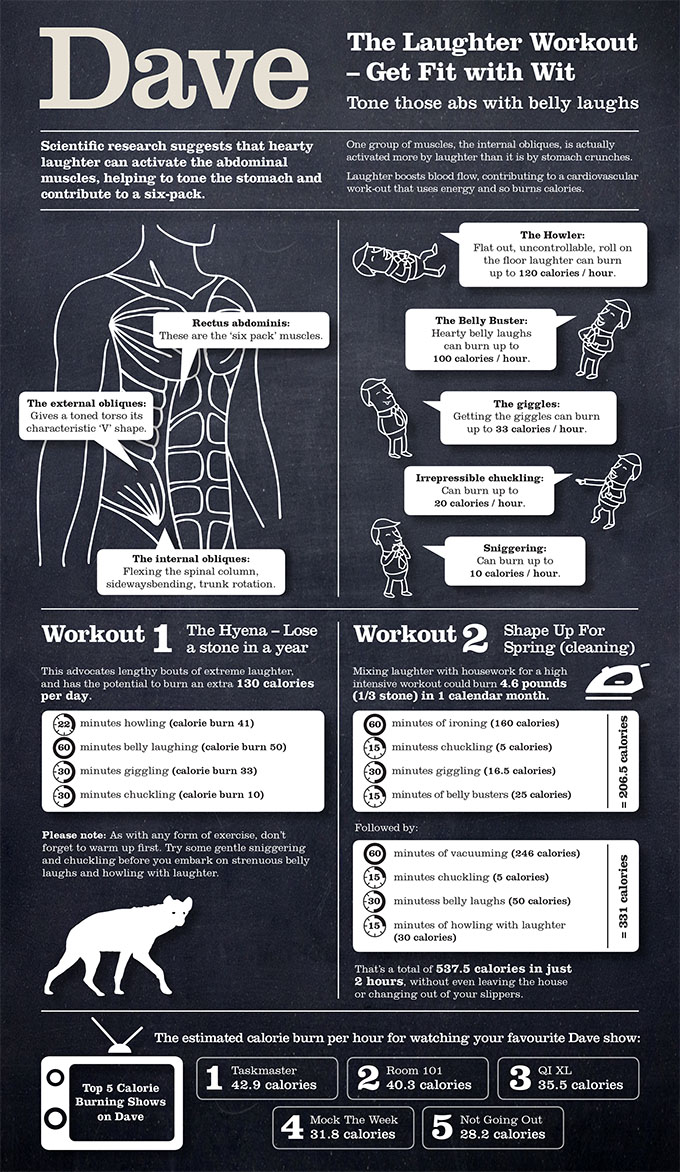 It’s widely accepted that laughter can have many positive effects on the human body, from boosting levels of ‘feel-good’ endorphins in the brain, to decreasing stress levels and dulling pain. But research hints that laughter is also good for the cardiovascular system and can help to tone the abdominals. In one recent study (Wagner et al 2014) researchers showed how hearty laughter can activate particular abdominal muscles. One group of muscles, the internal obliques, is actually activated more by laughter than it is by stomach crunches.

Pilcher and Harkness categorised laughter into five different types and estimated the calorie-burning potential of each. They estimate that:

‘The Howler’ – flat out, uncontrollable, roll on the floor laughter can burn up to 120 calories per hour

The Snigger – Sniggering can burn up to 10 calories per hour.

1) ‘The Hyena’ advocates lengthy bouts of extreme laughter, and has the potential to burn an extra 130 calories per day.

Suppose you have serious weight to lose, an extra stone maybe. To burn off an extra stone over the course of a year, the average adult has to consume around 49,000 fewer calories than normal, or expend 49,000 extra calories without eating any more. Per day, that means you will need to laugh away an extra 134 calories.

As with any form of exercise, don’t forget to warm up first. Try some gentle sniggering and chuckling before you embark on strenuous belly laughs and howling with laughter.

2) ‘Shape up for Spring (Cleaning)’ recommends mixing laughter with housework to augment the calorie-burning effects of mirth.

Like laughter, housework is an aerobic activity, so it can be used to supplement the calorie-crunching effects of mirth. It’s also highly compatible with enjoying television comedy. We recommend:

That’s a total of 537.5 calories in just two hours, without even leaving the house or changing out of slippers. Just one week of that regime would leave you approximately 1lb lighter (and with a much cleaner house).

After around a calendar month you could be 4.6 pounds (1/3 stone) lighter, more toned, fitter, and crease-free from your socks to your tea towels.

Steve North, Dave general manager says, “We like to think that Dave’s Laughter Workout is categorically the most fun you can have whilst shifting those post-Christmas calories.  So forget slogging it out in the gym surrounded by Lycra-clad Adonis’ and start laughing – the more you laugh, the fitter you’ll be!”

The team also sampled multiple episodes of comedy shows on Dave in January, and went on to predict the potential calorie loss that could be achieved by watching each of them, based on the duration of each type of laughter generated on average per episode.

Taskmaster with Greg Davies and Alex Horne produced the most howlers and belly busters with a total of 32 calories-worth of laughter throughout its 45-minute duration.

The Top 5 calorie burning shows on Dave in January (with an estimate of calories burned per hour):

The above shows are on Dave throughout January, or head to http://uktvplay.uktv.co.uk and indulge in the ‘Laughter Workout Collection’ – http://dave.uktv.co.uk/item/laughter-workout-collection/