Kwik Fit for a Queen.

LONDON, 18th April 2015: A giant portrait of Her Majesty the Queen, created entirely out of car and truck parts, has been unveiled ahead of the monarch’s 90th birthday on Thursday 21st April.

The technical tribute, which utilises over 800 individual components, was created by car servicing giant Kwik Fit’s staff to honour Her Majesty’s contribution to the Second World War, during which she trained and served as an Army mechanic in the Women’s Auxiliary Territorial Service (ATS). 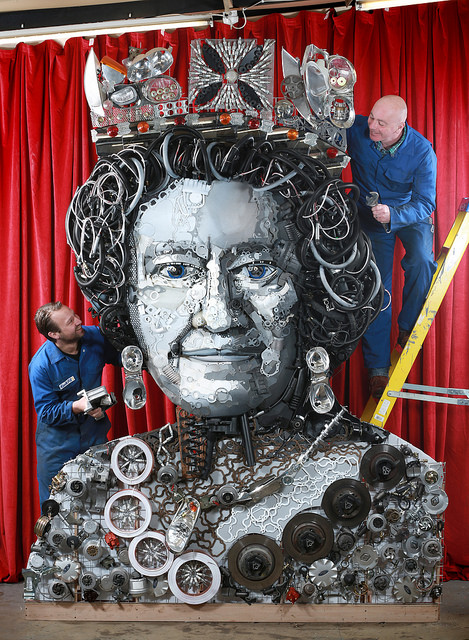 The huge variety of parts enabled the team to create an accurate likeness, even down to the smallest detail.

Lips – comprised of hoses and brackets

A crew of four worked on the construction of the monarch’s mechanical mirror image; a process which took over 280 man hours to complete. The team was led by artist David Parfitt, with the support of Kwik Fit technicians including Stuart Packham, Dan Read and Pete Hunt from South-Eastern branches of the organisation.

The team began by gathering and assessing different images of Her Majesty to use for the basis to the portrait (including her 2002 Canadian Jubilee portrait) before settling on a design of her resplendent in the George IV State Diadem crown.

After gathering parts from a huge variety of vehicles, Parfitt then mapped out which elements would be used to create the different aspects of the portrait including her face, hair, clothing and jewellery. 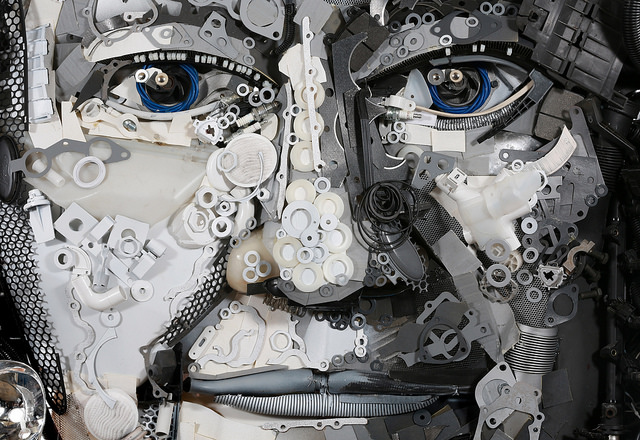 The giant crown itself includes brake and indicator lights from an original Austin K2 – one of the types of military vehicles that Her Majesty completed her mechanical training on in 1945.

The final portrait weighs in at 115kg.

Kwik Fit spokesman Dhiren Master said: “Not many people know that Her Majesty is our nation’s most famous mechanic – having trained and served in the Auxiliary Territorial Service in World War II. Our technicians thought it was about time that was rectified and wanted to play their part in paying tribute to her extraordinary contribution to her people over her long life. So what better way to celebrate her landmark 90th birthday than with their very own technical tribute.”

Artist David Parfitt said: “The Queen is one of the most respected and admired women in the world, so there was considerable pressure to produce a tribute that honoured her appropriately. By spending huge amounts of time ensuring we were meticulous, and being conscious of the fact that moving the tiniest part could make a big difference to the overall look, we think the finished portrait is a fitting acknowledgement of the contribution she made. We hope our Kwik Fit portrait gets the royal seal of approval!”

The artwork Queen of Parts will be touring Kwik Fit centres up and down the country.

Afterwards, staff hope to present the artwork to curators at The Queen’s Gallery at Buckingham Palace for inclusion in the royal collection.

Behind The Scenes video available to embed: http://youtu.be/mwIwi6WRBYE

For details on the touring exhibition visit www.kwik-fit.com/queenofparts

The Best PR Stunts from Betting Brands and Bookmakers