LONDON, Monday, 18th April 2016: Britain’s leading illusionist Derren Brown has given the public a terrifying new insight into his forthcoming Ghost Train attraction by unleashing a demon type creature on the general public ahead of the grand opening coming soon at THORPE PARK Resort. 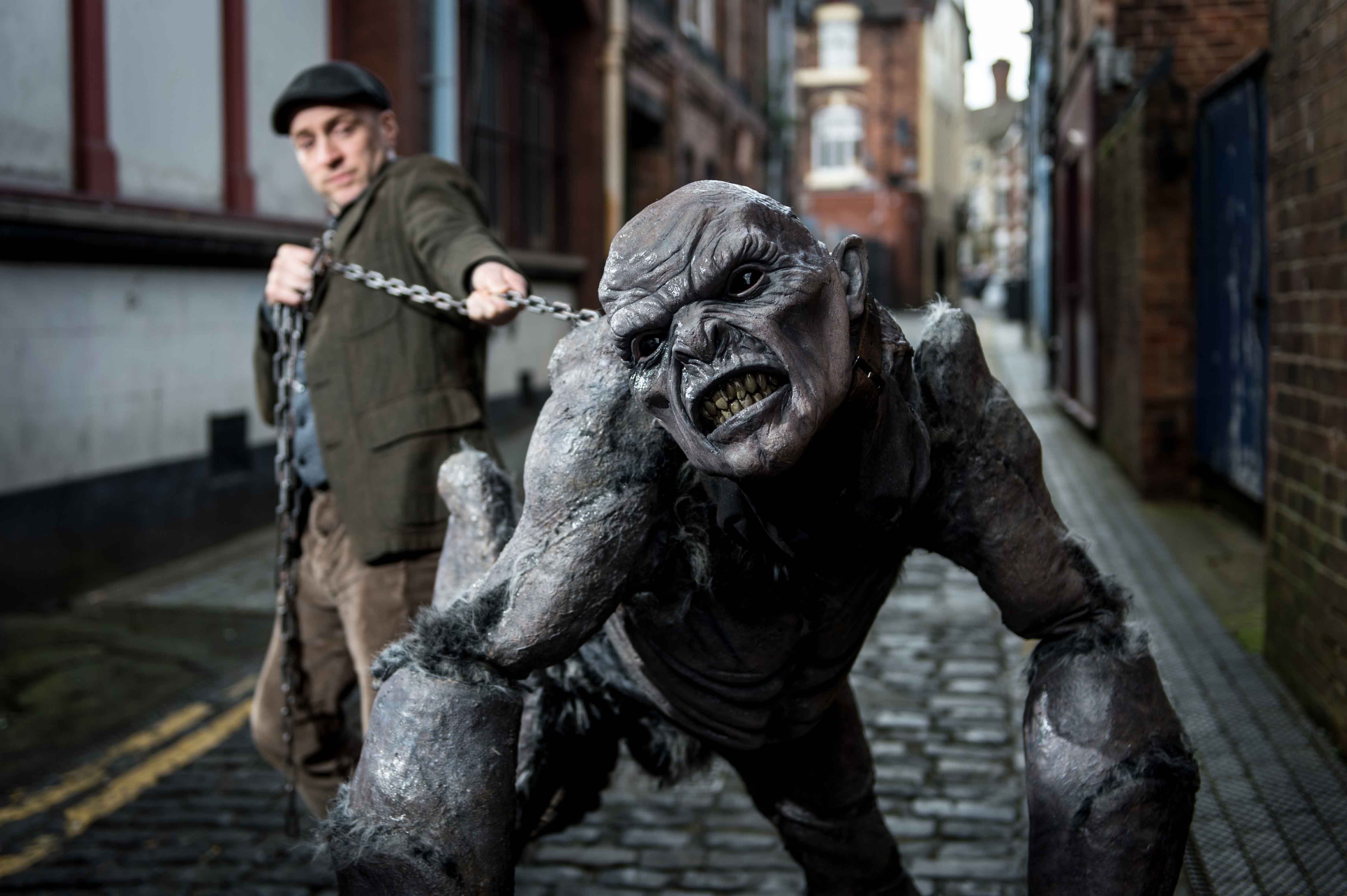 EDITORIAL USE ONLY Illusionist Derren Brown walks with a four-legged demonic creature near the Grand Theatre in Wolverhampton, where he is currently performing, as more details of the ‘Derren Brown’s Ghost Train’ are revealed, ahead of it’s opening date to the public in May 2016 at Thorpe Park Resort in Surrey. Issue date: Monday April 18, 2016. The demon is one of the characters to feature on the Ghost Train, which will take guests on a 10-15 minute journey. The attraction integrates live action sequences, 4D special effects, grand-scale illusions, next generation technology, and physical transit. The ride has 12 multiple knee-shaking journeys and two endings, so no two ‘rides’ will be the same. Photo credit should read: Daniel Lewis

New images and video released today give the first hint that the narrative of the new attraction (suitable for ages 13 and over) will indeed be very different from traditional ‘ghost train’ rides of old.

The demon type creature will be one of a number of characters in the virtual reality storyline, designed to take visitors on a surreal and head-spinning 10- 15 minute journey.

The illusionist was pictured walking the four-legged monstrous demon on a lead close to the Grand Theatre in Wolverhampton where he is currently performing on tour and is also seen introducing a secret camera video where he unleashes the creature on a series of unsuspecting members of the public.

A specially commissioned team of special effects wizards and prosthetic artists spent three months creating and building the creature which was designed by Derren for the new attraction.

THORPE PARK Resort and Derren Brown put the demon’s scare factor to the test by unleashing it on the theme park’s staff, capturing reactions on hidden cameras. Employees on site at the theme park and at the Head Office were left terrified after the demon was let out of its cage and went on the rampage.

Derren Brown commented: ‘I am excited to reveal another glimpse into my new attraction, giving the first look behind the doors of the Ghost Train. Over the last few weeks I have been testing out the components of the attraction and decided to run scare tests with my demon creature on the Thorpe Park staff – the reactions were hilarious and very encouraging. Passengers aboard the Ghost Train will experience a pretty extraordinary combination of next generation technology, grand illusion, special effects and live action, completely unalike anything they will have seen before.’

The demon is the latest in a series of reveals from THORPE PARK Resort to promote the new attraction. Previously, eerie, life-size Victorian dolls shocked commuters in London as they were spotted at numerous locations across the capital. The incredibly realistic 4ft 7” high ‘living dolls’ sent people into a frenzy on social media, with locals desperate to find out more about their creepy appearance. The initial announcement of Derren Brown’s Ghost Train was paired with a series of images of the renowned mentalist’s mouth sewn shut – hinting that he has been sworn to secrecy on this new endeavor.

The creature is one of the characters to feature within the narrative of Derren Brown’s Ghost Train, which will take guests on a head-spinning train journey or between 10-15 minutes, like nothing they have ever taken before. This brand new attraction provides a thrilling mix of exhilarating live action sequences, 4D special effects, grand-scale illusions, next generation technology, and physical transit, leaving visitors questions where perception ends and reality begins.

The attraction has 12 multiple knee-shaking journeys and two endings, so no two ‘rides’ will be the same but every journey will also provoke an intense reaction from each individual ‘passenger’. Whilst guests may share their journey with others, each experience will be an individual one, with every journey, sensation and fear unique.

Mike Vallis, Divisional Director of THORPE PARK Resort commented: ‘Following our announcement of Derren Brown’s Ghost Train, we’ve had many people trying to discover its’ tightly guarded secrets. As we approach the opening of this ground-breaking attraction, we unleashed one of the many terrifying features on our own employees in a series of scare tests. As the footage shows, visitors are in for the shock of their lives when they come on board Derren Brown’s Ghost Train. This is the most exciting and ambitious project we have ever attempted at THORPE PARK Resort and will be nothing like visitors have ever experienced before.’

For the latest updates on the new attraction and to be in with a chance to be the first to ride the new experience, visit mindswanted.co.uk. Age restrictions will be in place for the new ride, but are yet to be announced.

THORPE PARK Resort has recently re-opened with over 30 thrilling rides and attractions and live events to enjoy. As well as Derren Brown’s Ghost Train, there are new challenges to test in I’m A Celebrity…Get Me Out of Here, based on classic moments from the last series as well as iconic rides including the UK’s first winged rollercoaster THE SWARM, SAW – The Ride, the world’s first horror movie themed rollercoaster, STEALTH, one of Europe’s fastest and tallest roller coasters and COLOSSUS, the world’s first ten inversion rollercoaster, as well attractions such as RUSH, the world’s largest Speed Swing.

Why not add even more bite to a fun-packed visit by booking a stay in the THORPE SHARK Hotel. The unique accommodation features 90 bite sized rooms that sleep up to four people and includes free Wi-Fi, flat screen TV entertainment packages including Angry Birds App and on-demand movie service.

Kwik Fit for a Queen