The company has now launched in 13 cities Worldwide and recruited 42,000 drivers to the service. In London alone, 13,000 drivers, over half of the capital’s Cabbies, have now signed up to the app.  And three million UK customer journeys have been completed since launch. 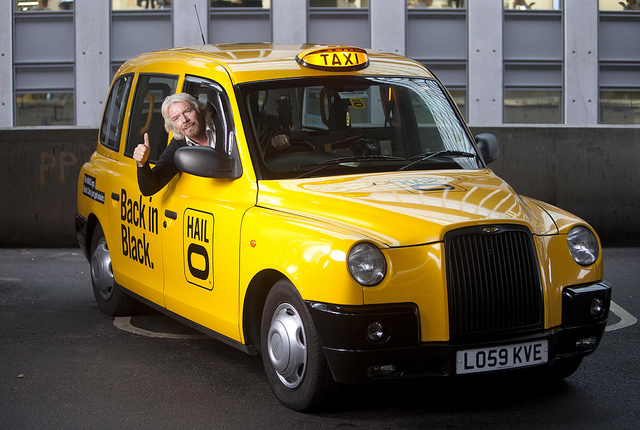 Investor Sir Richard Branson, who was pictured behind the wheel of a Hailo branded cab today to announce the business landmark, predicted that the number of UK and worldwide registered drivers would double within a year due to the rapid growth of the simple, free smartphone app.

Sir Richard who is known for his forays into all air, rail and space travel said that he was hugely excited to be one of Hailo’s backers playing a part in helping to revolutionise city transport with Hailo which has enjoyed a meteoric rise since the app was launched in November 2011.

Sir Richard commented:  “Hailo has revitalised London’s famous taxi scene with cutting edge technology. A Londoner now gets into a Hailo taxi every seven seconds which is an incredible achievement for a company which is less than two years old.

“The black cab has been a fixture in the capital for more than 100 years. Hailo’s great success has been driving more business for thousands of licensed taxi drivers by ensuring that passengers get around town safely and efficiently. Not only this, but everyone benefits from the significant environmental benefits from fuel-saving efficiencies.

“The fact that you are never more than two taps away from a taxi has proved Hailo’s big selling point and a huge time saver for busy people on the move. It’s already in New York, Dublin and London and looking forward to Hailo rolling out around the world over the next few months.”

The Hailo app acts as a matchmaker between empty cabs and would-be passengers. From any corner store, home, office or pub in cities such as London, New York, Osaka, Dublin, Limerick Toronto, Chicago, Boston, Washington, Madrid and Barcelona you can pull out your smartphone and, with a tap, virtually hail a taxi.

Hailo, the taxi magnet, is the evolution of the hail – a free smartphone app that uses GPS technology to make sure people are never more than two taps away from a licensed taxi, and that taxi drivers are getting more passengers when they want them. It’s the world’s highest rated taxi app with over 11,000 five-star reviews.

Founded by three London black cab drivers and three internet entrepreneurs, Hailo is backed by Wellington Partners and Atomico Ventures, the investors in Spotify and founder of Skype as well as Facebook backer Accel Partners.

To get the free download search “Hailo” in the App Store or Google Play, alternatively visit hailocab.com.

Bear Grylls Is Back!

That Tuesday Thing [No.8]