FUBAR Radio – the first uncensored radio network in the UK.

Untouchable by the regulators, cutting-edge FUBAR will create and broadcast provocative, entertaining, no-holds-barred chat, comedy and content that could never be heard anywhere else on UK radio, alongside uncensored music that is never play-listed or rotated.

FUBAR Live, an irreverent blend of talk, comedy and music will offer regular daily and weekly shows from some of the most outrageously funny talent in the UK, giving both established and up-and-coming comedians and presenters a unique platform to showcase their skills. Just like TV, presenters may do a series of shows for six weeks or more, as well as one-off programmes. 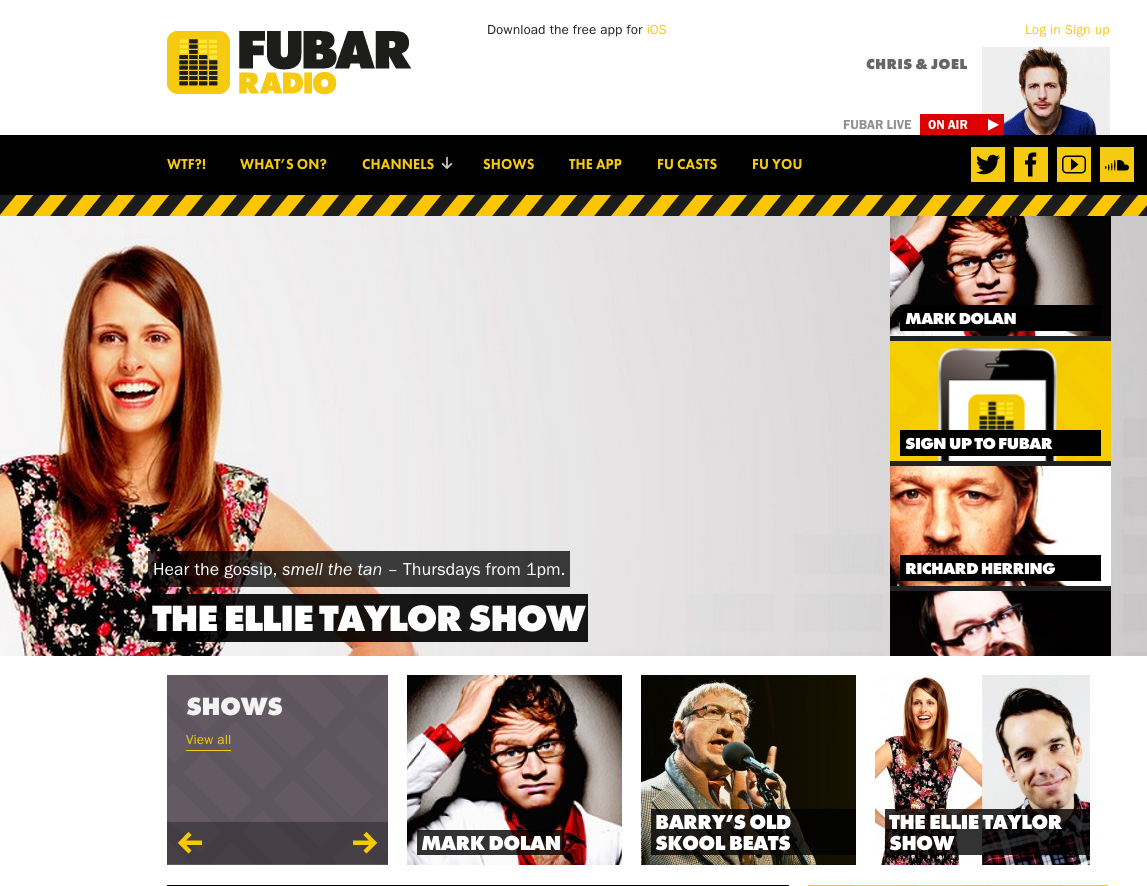 Alongside Mark Dolan taking a biting look at the news in the weekday morning slot, launch shows include master of British comedy Richard Herring in his uncensored, unedited radio debut, Peacock and Gamble talking to the biggest names in comedy, Ellie Taylor rummaging through some celebrity dirty laundry and potty-mouthed octogenarian and “friend to the stars” Barry from Watford’s fashion tips.

At weekends, Tom Deacon and Neil “Razor” Ruddock will hear just what their audience think about their teams’ performances in a football show unlike any other, as they take unedited and unscreened calls from passionate and opinionated fans.

Listeners will be able to interact directly with the shows via the app – sending audio directly to the studio, voting in polls and sending virtual claps and slaps. The full schedule will be on air from Monday 24th February.

The network’s second channel, FUBAR Funny will be the first dedicated to broadcasting uncensored archive comedy content; banned from TV and traditional radio; material that can’t be broadcast anywhere else, when it launches in the weeks following FUBAR Live.

Richard Herring commented: “I am delighted to have my own show on Fubar. It’s thrilling to have no restrictions (within the limits of the law) to what we say and do. It’s totally uncensored. What a relief to be treated like an adult. I might say “Willies.” Can’t wait!”

FUBAR Radio CEO Duncan Smith said: “We’re very confident that the launch of FUBAR Radio will be a real radio revolution for comedy fans, giving listeners a unique opportunity to hear and engage with our presenters in a way they couldn’t anywhere else. We hope everyone enjoys the shows and interacting with the studio.”

FUBAR Radio will be available for download exclusively on iOS via the App Store for two weeks from 20th February, before also becoming available on Android.

FUBAR Radio is the UK’s first uncensored, subscription radio network. Primarily talk-based (75% talk, 25% music) and aimed at an 18-35 audience, FUBAR is host to some of the funniest and edgiest talent in UK entertainment. Fubar offers two subscription channels: FUBAR Live is a unique blend of uncensored talk, comedy and music; FUBAR Funny is dedicated to broadcasting uncensored comedy from a wealth of archive material. Fubar Live is £2.99 per month, Fubar Funny an additional £1.99 a month. Subscriptions are available via the iOs or Android app, or online via paypal subscription at www.fubarradio.com

The Valleys: An Eye Popping Roadside Welcome To Wales