As temperatures in the capital soared to a sticky 26 degrees this week, and conditions on the tube were even hotter, male office workers in the City Of London were reported to be embracing a bizarre fashion trend for super high-cut shorts. 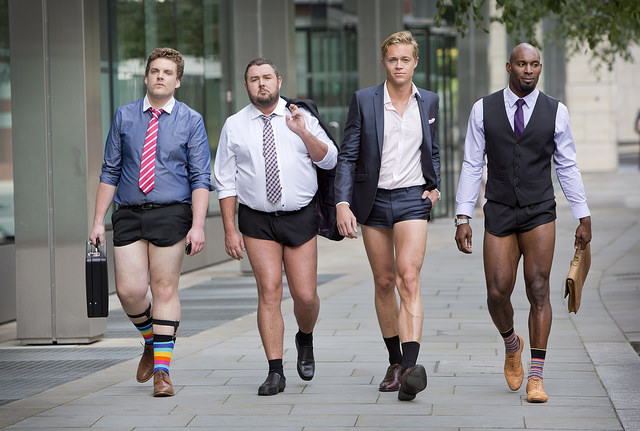 However, Londoners can rest easy as the extreme version of dress down Friday, which took Twitter by storm earlier this week, has now been revealed as an elaborate marketing stunt by Channel 4 to launch its new original Shorts programmes which are available to watch on the move, exclusively on Channel 4’s on-demand service, 4oD.

Things you aren’t sure you actually saw on the tube pt.27735. WT actual F? pic.twitter.com/ZlGEfdTEUA

The broadcaster had deployed a team of brave male models to frequent City hotspots – kitted out in cringeworthy, buttock-revealing micro suit shorts. 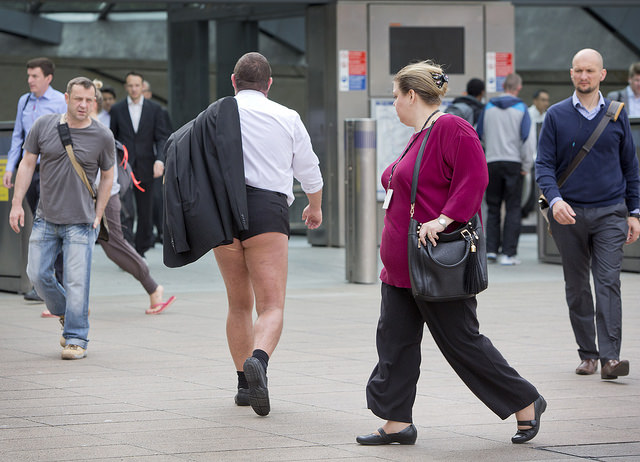 A tailor spent two weeks creating the bespoke ‘barely there’ bum huggers, before the trouser-challenged cast took to the Capital’s streets, strolling through Canary Wharf tube station and visiting the Square Mile decked out in scarily shrunken suit trousers.

Passers-by looked on with horror, fear, amusement, awe, indignation and wide-eyed disbelief as the models strutted past, sat down next to them and even dropped their keys before bending over to pick them up… 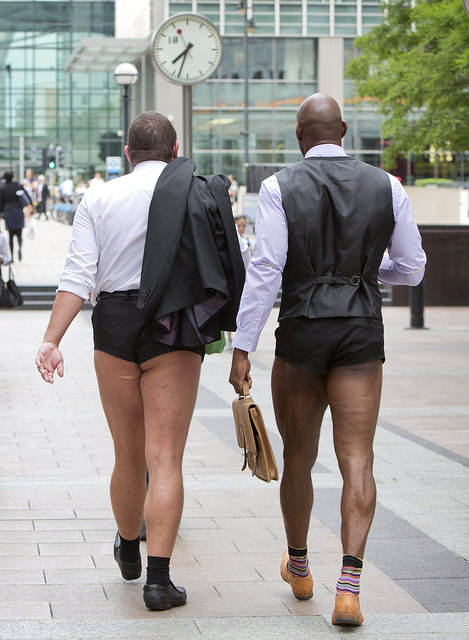 The reactions were captured on hidden cameras to promote Channel 4’s new 4oD Shorts – and it certainly caused a storm on Twitter.

Channel 4’s specially commissioned original Shorts programmes for 4oD are designed to be watched anywhere on mobiles and tablets via 3G, 4G or wifi – perfect for when people want to fill those spare five minutes with quality bite-sized shows. . All Shorts programmes are badged with their length (e.g. 4 or 5 mins) and are easy to find in a new Shorts area on 4oD.

These brand new Shorts feature top Channel 4 names including: Jamie Oliver and Food Tube celebrities, Guy Martin, Made In Chelsea’s Binky Felstead and Mark-Francis Vandelli and many more – and will also introduce many more new faces, writers and producers to 4oD from the TV and internet worlds.

The original Shorts collection features a diverse range of innovative shows for viewers to snack on wherever they are; Shorts on films, games, comedy and satire, popular science and futurology, lifestyle and food shows, current affairs – as well as engaging education shows for teens.

Richard Davidson-Houston, Head of Online at Channel 4, says: “We’re really excited to launch original Shorts programmes on 4oD to meet the growing demand from viewers for mobile, snackable shows. This ‘cheeky’ campaign is a great fun way to get things started.”