Britain’s 50 most influential artists of the last 50 years have been revealed in a new list compiled by a panel of esteemed experts from across the arts industry.

A team of expert judges across music, film & TV, performing arts, literature and visual art were challenged to create the list by TV channel Sky Arts in a celebration of British artists past and present and their influence on global culture. 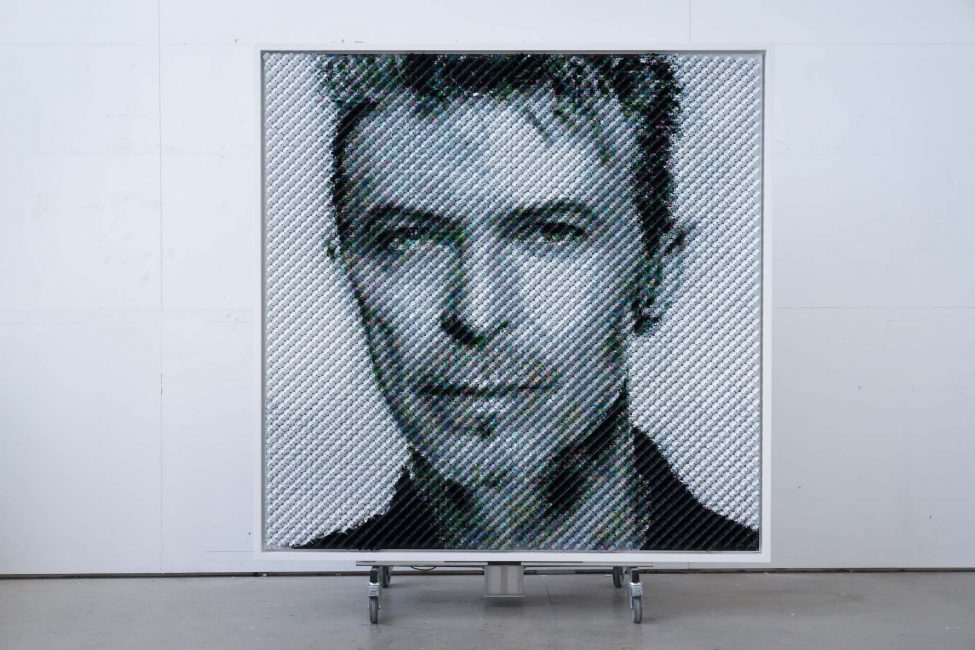 Bowie was named most influential by judges as they commended his influence across the industry and ability to transcend a variety of mediums including music, film and fashion.

Each plectrum features a cut out shape to symbolise all the artistic disciplines Bowie influenced, from music and film to art, performance and poetry.

Britain’s top 10 most influential artists of the last 50 years are:

The artwork, standing at a mammoth 2m tall, has been made using 8,610 individually placed guitar plectrums.

The final result is a stunning portrait of Bowie that will be donated by Sky Arts to a school in Bowie’s home town of Brixton, celebrating the new generation of young artists who will be inspired by the musical legend.

Joe is renowned for his portrait and abstract work, and combined his natural craft skills with a love of materials to pioneer an elaborate new form of pixilation.

Speaking about being involved in the campaign, Joe said: “This portrait was created to celebrate David Bowie being named the most influential artist of the last 50 years. His visual representation had a huge impact across all of the arts worldwide. The idea was to use thousands of specially designed plectrums with each design representing one of the five artistic areas of Bowie’s creative life and influences – music, film, fashion, literature and art. Bowie was a maverick and a global icon who initiated a new Bowie era in popular culture.”

Coming in at second in the Top 10 list is Sir Steve McQueen CBE, known for both his Oscar-winning direction of 12 Years a Slave, as well as his renowned visual artistry which won him the prestigious Turner Prize in 1999.

The list continues with Russell T Davies OBE, who revived Doctor Who to worldwide acclaim in 2005, and later received a BAFTA nomination for his ground-breaking drama, It’s a Sin.

Fashion powerhouse, Dame Vivienne Westwood, comes third for being the epicentre of punk fashion since the 1970s, followed by writer Caryl Churchill who challenged the norm by bringing unconventional themes into contemporary theatre.

Beyond the top ten, a variety of acclaimed British artistic talent, past and present, feature in the Top 50 list. Included in the full list are Ricky Gervais, known for his controversial comedy, as well as Skin, lead vocalist of Skunk Anansie and Glastonbury’s first black British headliner in 1999.

Many of the artists featuring in the Top 50 can be found in curated Sky Arts programming across the next month, be that Ridley Scott: The Directors on 18th August or The Banksy Job on 31st August, and many more.

The judging process was hard fought, with each judge supplying a selection of names that influenced the arts industry before coming together to discuss and score each artist to compile the shortlist of 50.

Speaking about leading the judging conversations to help determine the Top 50 list, Chair of Judges Lauren Laverne, said: “I was honoured to be chosen to take part in this judging day for Sky Arts, as working with such a respected group of judges I knew their conversations would be fascinating… and they were. The judges took so much time and care with their scoring to ensure the Top 50, Top 20 and Top 10 lists were truly the best of the best in terms of influence, and the final list are artists that are so deserving of their places. David Bowie coming in at number one was the cherry on top of a brilliant judging process, and it was great to be a part of it.”

Phil Edgar-Jones, Director of Sky Arts, said: “The Top 10 list is filled with incredible home-grown talent that spans all areas of the creative arts. The influence that these artists have had on their own industries, but also on wider culture is astonishing, and it’s great to see them get this recognition. As our number one artist, we wanted to honour David Bowie in a way that would feel fitting to the scale of his influence. The artwork that has been created by Joe Black honours the ways that Bowie’s influence transcends genres, through guitar picks with cut out designs of music, art, stage and screen.”

House Of Dragon throne revealed at Tower Of London