Dashing through (and above) the snow with Samsung and Casey Neistat.

Is it a bird? Is it a plane? No, it’s Casey Neistat in a Santa Costume attached to a drone! Samsung has teamed up with the influencer and YouTube star to release a holiday video which shows Casey take a more modern view of Santa’s Christmas flight as he speeds around the frozen landscape of Finland opting for the aid of a huge high tech drone over a series of magical reindeer.

With overtures of “I’m dreaming of a White Christmas” and decked with fitting LED lights, Casey unveils his custom built drone designed with Samsung capable of lifting a human. Something which is at the moment unavailable on the open market.

Stunned onlookers watch as Casey is whisked away by the pull of the drone and is led up a snow drift before finally taking to the skies as the sun sets and night descends showing off the colourful light display on the machine. 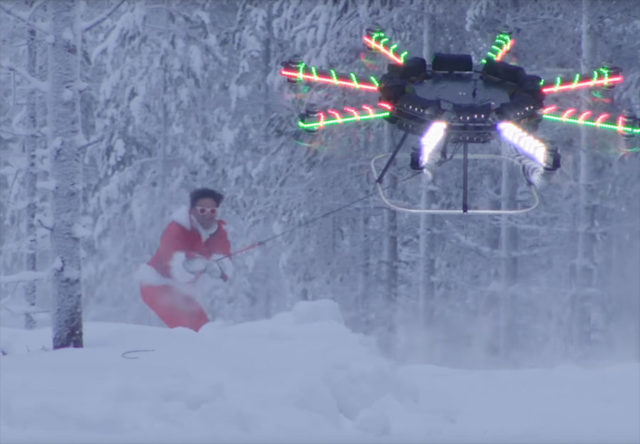 The video has almost already racked up an impressive 5 million views on Casey’s channel and is the 8th trending video on YouTube. A separate “behind the scenes” video has also accumulated over 1 million views and gives some deeper insight into the goings on around the production of the video including a humorous scene with “the real” Santa as Casey informs him that he will be taking over his duties this year and discussions with the locals who were lucky enough to witness the new technology first hand. A further video uses the company’s Gear 360 camera to shoot a new perspective of the shoot to truly put the viewer in the action.

The message behind the stunt is that Samsung want to be seen to be pushing the boundaries and leading the way in the tech race developing devices which are the forefront of new advances in the industry. With three individually successful videos and such a well-known internet personality as Casey standing beside them, Samsung will be the ones getting some Christmas cheer this year.

Watch the video below:

Table football and televisions: not your average Christmas tree ornaments

Changing rooms become a thing of the past with Superdry