Sacha Baron Cohen arrives at last night’s Oscars in the guise of his new comic creation The Dictator and baring the ashes of his his ‘dear friend and table tennis partner’ Kim Jong-il.

The BBC reports; ‘In an interview with US TV host Ryan Seacrest, he (Cohen) said it was Kim’s dying wish “to be sprinkled over the red carpet and over Halle Berry’s chest’.

Cohen then proceeds to scatter the ashes across the carpet and over Seacrest.

The Mirror reports that Baron Cohen was soon grabbed by security guards, with one attempting to get him in a headlock. Vacuum cleaners emerged from nowhere and swept poor Kim Jong-il’s remains into a nearby bin. Cohen is the king of the red carpet press opportunity.

In 2006, Borat arrived at the Toronto International Film Festival in a cart pulled by peasant women. White House Secret Service agents turned away Cohen when he tried to invite “Premier George Walter Bush” to a screening of his upcoming movie, Borat: Cultural Learnings of America for Make Benefit Glorious Nation of Kazakhstan.

In 2009 at the MTV Video Music Awards, promoting Bruno, he was launched into the air wearing a harness and angel wings before crash landing in the lap of US rap star Eminem. 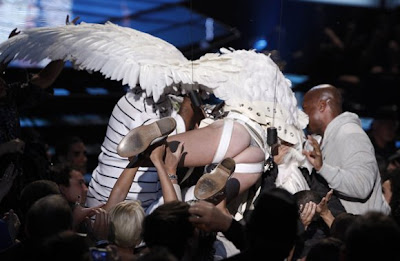