New natural history TV channel Eden challenged us to create and stage a large-scale visual stunt to draw attention to their launch day. 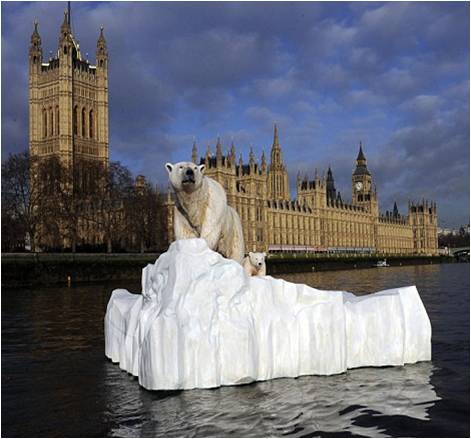 The brief required an idea which would work on several levels; most importantly the initiative needed to amplify awareness of the channel launch within the UK media and successfully communicate the core channel proposition.

We were also tasked to drive traffic to Eden’s website and highlight the Fragile Earth series being shown across the channel.

We needed to create a great picture, a unique image that no one had seen before or a new twist on a familiar theme – if we could crack that then we would have a great  story but where to start?

The Taylor Herring team interrogated the launch programming schedule for ideas and analysed the most iconic wildlife scenes and images of recent years for inspiration. After much debate we finally arrived at our key creative – an iceberg featuring a stranded polar bear floating adrift on the River Thames.

The idea paid back to the launch series ‘Fragile Earth’ and provided us with media currency – the stranded polar bear was not just an iconic wildlife image but also a potent symbol of global warming that would add relevance to our story.

While we were confident that our Thames launch would provide us with the compelling news picture, we also felt that the sheer scale of the project merited a series of further mini-launches around the country that would serve to maximise awareness in key demographic regions of the UK.

Eden loved the idea and Taylor Herring moved on to the design of the sculpture, working closely with our design team of 15 artists to make the bears and iceberg as realistic and impressive as possible.

Realism was key and the build needed to look as lifelike as possible if the stunt was to work.  With this in mind, we liaised closely with our artistic team on every detail from the paintwork and scale (1:5-1) to the icebergs dimensions and the static pose which would work best visually.

With a mere six week window from sign-off to launch, decisions needed to be taken fast and at the end of the first build week we decided to raise the impact of the model by adding a  baby cub to the build.

It was at this stage that we decided our bears’ should have names and so Edie the Polar Bear was born and our launch date of January 26th was dubbed ‘E-day’.  We also liaised with the channel to ensure support for the launch stunt from Sir David Attenborough – the presenter of many of Eden’s key programmes and the world’s pre-eminent authority on the natural world.  Sir David gave us a quote which was included in our launch release.

As the build approached completion, the Taylor Herring team staged a dry run on the river to assess logistics including the tides, timings and the choreography of the shoot. The rehearsal enabled us to pinpoint the Houses of Parliament and Tower Bridge as our key backdrops to the media call and to pinpoint the best possible window for that all important sunshine.

Finally with days to go our PR team held a series of desk side briefings with national picture editors, talking them through every step of the build, the channel proposition and our plans for the E-day.

On Monday 26th January 2009, at 6am in the morning, the 1.5-tonne, 30ft sculpture was winched into place on the Thames where it began its journey from Greenwich in South East London to the Houses of Parliament.

A separate press boat collected photographers from key news agencies and national newspapers including The Sun, Daily Mail, Daily Telegraph, The Guardian, The Evening Standard and our own film crew.

Following weeks of grey skies and rain, the sun decided to shine on E-day…

Within five hours of release, fully credited images had appeared on every daily national newspaper’s websites. That very same evening every key London newspaper featured images of the polar bears including The London Paper and

London Lite and we secured a double page picture spread in that day’s Evening Standard. Fully credited online coverage was secured on 50 separate websites on the day of launch including the world’s most popular blog The Huffington Post, bbc.co.uk, Sky News.com and the major portals Tiscali, Virgin Media, AOL and MSN News.

The launch day coverage was followed with credited images and discussion points in The Sun, The Metro, The Times, The Daily Star, The Daily Mail, The Independent, The Guardian and The Telegraph as well as numerous key regional newspapers including The Manchester Evening News, Yorkshire Evening Post, Shropshire Star and Glasgow Evening News.

The story has since been featured in OK! – the UK’s biggest selling weekly magazine, the news roundup in The Weekly News and even merited inclusion onto the homepage  of the world’s leading environmental magazine Ecologist website who also included our story in their weekly online mailout to 25,000 subscribers.  International coverage

was also impressive with picture stories running all over the world from The New York Post to The Brisbane Times.

The online story has also continued to grow throughout the week with further coverage on twenty editorial websites and fourty seven blogs.  Eighteen sites were also featuring our online film of the polar bears’ journey including Telegraph TV and The Sun websites, with at least 80% of all the sites running the story also running the url to the Eden website.  Blogger posts sent our story global with pickup secured on key eco blogs Treehungger, Ecorazzi and Do The Green Thing to name but a few. So far there have been more than 200 mentions for Eden in online coverage which continues to grow on a daily basis

Our campaign, which is still in motion with a regional roll-out has reached more than 254 million people and is still being quoted and spoken about to this day. Following the stunt, web traffic to Eden’s site tripled overnight and viewing figures were up 130 per cent for the programme average.

To see the behind the secenes video click here