TUESDAY, 3rd May 2016: Leicester City fans will be able to toast their captain Wes Morgan with a limited edition Captain Morgan bottle, featuring the star player, following his side’s victory in the Barclay’s Premier League title on Monday. 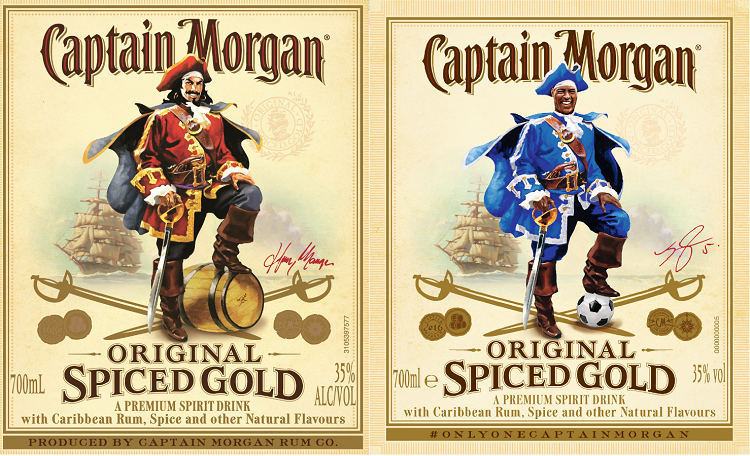 The spirit brand will release a limited edition bottle designed to celebrate the Premier League winner’s victory – replacing their famous buccaneer on the label with an image of the footballer.

The bottles flowed into production following a Twitter exchange between Captain Morgan and the player after Leicester City were crowned champions following Tottenham Hotspur’s draw with Chelsea on Monday night.

The drinks company have fast-tracked the production of the limited edition bottle, which features Wes Morgan’s signature and an updated medallion with 2016 inscribed to mark his title victory as team captain.

Fans of the premiership football player voiced their love for their Captain with praise across social media using the hashtag #OnlyOneCaptainMorgan, which also features on the bottle.

Wes Morgan has played every minute of the title winning campaign so far (3,285 minutes), becoming the third outfield Premier League champion to do so after Garry Pallister and more recently John Terry in 2015 who both completed the season having played 3,420 minutes. The defender scored an equaliser for Leicester City against Manchester United on Sunday to gain his team a crucial point and secure the title on Monday with 77 points and 2 games to spare.

The Foxes, against odds of 5000-1 at the start of the season, became Premier League champions for the first time in their history beating off the likes of ‘super-clubs’ such as Manchester City, Chelsea and Arsenal.

Rhys Love, Senior Brand Manager of Captain Morgan said: “Captain’s lead by example and we are thrilled to have one of the greatest captains of recent times, who coincidentally shares our name, become the centre of a historic sporting moment. We have created a limited edition commemorative Captain ‘Wes’ Morgan bottle to celebrate his incredible title win triumph as the club’s skipper. We salute Leicester City and their own Captain Morgan.”