London, Friday 6 December 2013: A series of paranormal videos released on YouTube and alien events in Bristol this week, were revealed today to be part of an elaborate marketing stunt by UKTV’s entertainment channel, Watch.

The guerrilla campaign was created to launch to launch ‘The Happenings‘, an audacious new illusion series featuring master magicians ‘Barry and Stuart’, a new show from the producers of Derren Brown. 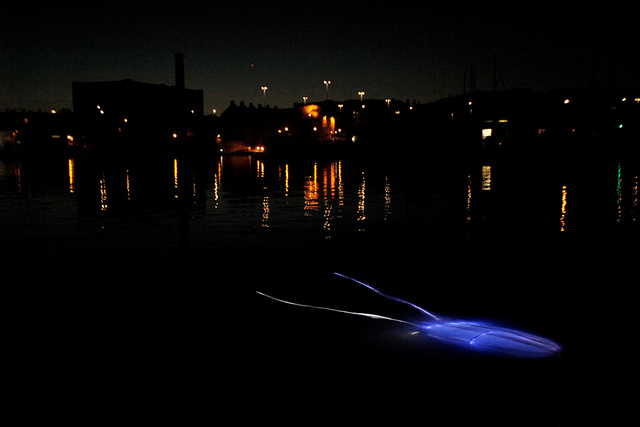 The various videos, which feature paranormal and strange occurrences, have accumulated over 1m views since they appeared on the popular online video sharing network over the last four months.

The latest installment of the elaborate social media campaign saw the appearance of a giant, bioluminescent ‘alien’ creature in Bristol this week. 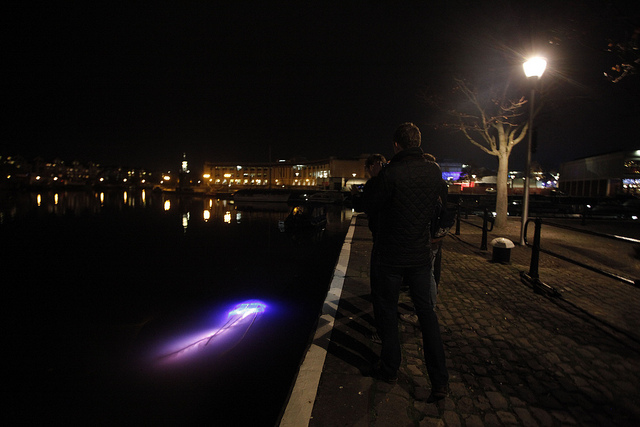 Bristolians took to social media to report a 15ft, squid-like E.T. pulsing beneath the water in the city’s harbour.

Videos and images shot by stunned locals of the tentacled alien first appeared on Tuesday (Dec 3).

Within 24 hours, speculation about the creature’s identity reached fever pitch on Twitter, Facebook and social forums. Over 3.5 Million Twitter impressions about the sightings have been recorded in the last three days.

Dr Steve Simpson, from the School of Biological Sciences at Bristol University, was quoted as saying “It’s very intriguing – I don’t really know what to make of it.”

Yesterday Kerry McCarthy the Labour MP for Bristol East tweeted a picture of the extra terrestrial writing “In other news, a giant jellyfish/ squid/ alien has been spotted in Bristol harbour.”

Meanwhile BBC Bristol had called in the services of an expert from Bristol Aquarium to help explain the sightings on the local breakfast show.

Theories about the beast on Twitter ranged from ‘Freaky glowing squid’ to ‘giant jellyfish’ with one Tweeter describing the occurrence as ‘Close Encounters Of the Bristol Kind.’

And on YouTube, one video of a squid sighting reached over 160,000 views with commenters speculating it might be the work of legendary Bristol artist Banksy.

The audacious marketing campaign was supported with a Live Blog on Watch’s website which was updated in real-time pulling in images, videos, tweets and media coverage.

A ‘Promoted Tweet’ campaign was bought against relevant hashtags and footage from the live events in Bristol are being used in TV ad spots to promote the show.

Other viral videos – which feature paranormal and strange occurrences – have accumulated over one million views since they appeared on the popular online video sharing network over the summer and autumn. In July, spooky CCTV footage showed paranormal activity in a corner shop.

Richard Watsham, Senior Commissioning Editor at UKTV says, “The Happenings is a new type of narrative magic show that brings the most extraordinary movie scenes to life in front of bewildered onlookers. The outcome is a truly spectacular series that shows Watch can be as bold and innovative as any other channel and this marketing stunt was designed to capture the imagination and create intrigue around the series.”

The Happenings follows magicians, Barry and Stuart as they set about making the unbelievable believable to the unsuspecting residents of towns across the UK and America.

The series has been co-created by Objective Productions, the team behind Derren Brown’s BAFTA award-winning TV specials, and Crook Productions, and will air on Watch from Monday at 9pm.

Each episode is a self-contained narrative event and features a number of mysterious incidents that play out over the course of a few weeks in four different towns. Whilst the local population are in the dark, the viewer is in on the act from the start, however, they can expect to be amazed and surprised by the incredible events as they unravel.

The Happenings launches on Monday 9th December at 9pm on Watch.

Pictures available for editorial use here.

Scroll down through this Storify to see how the story unfolded