“Some say he is a giant, measuring nine metres in height, and travels around on the back of a flatbed truck. All we know is, he’s called The Stig.”

The 9 metre high effigy of the Top Gear star which will make its way through Europe before arriving at Warsaw, Poland to mark the launch of the new global channel from BBC Worldwide. 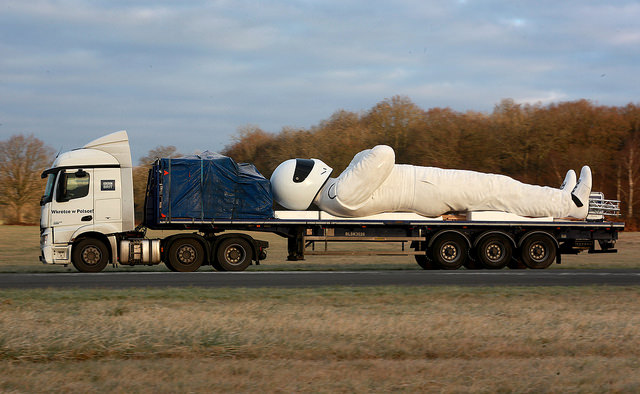 The statue will be erected in Warsaw adjacent to the city’s most famous landmark, The Palace of Science and Culture later this week to celebrate the international channel making its debut on 1 February 2015.

The Stig; star of the worldwide hit show Top Gear has been immortalised as a giant 30ft high statue to celebrate the launch of the new global TV channel BBC Brit.

The model, which is made from fibre-glass, took a team of three sculptors over two months to design, construct and paint. 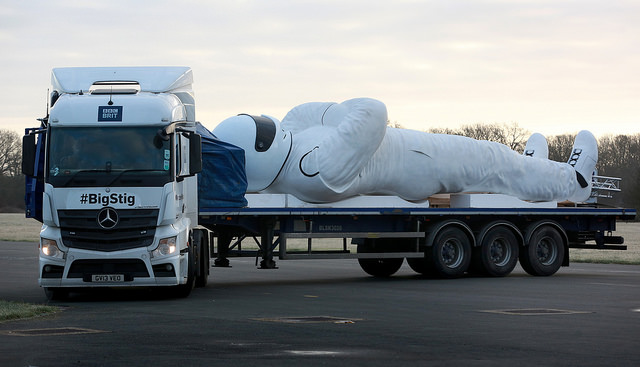 The giant sculpture of The Stig’s head and torso alone measures 12 feet, equivalent to the height of a double decker bus.

The Stig departed from Top Gear HQ at Dunsfold Aerodrome in Surrey for a three day journey through Europe which will see #BigStig call in at Amsterdam and Berlin before arriving in Warsaw, Poland where BBC Brit will launch on the 1st February 2015. 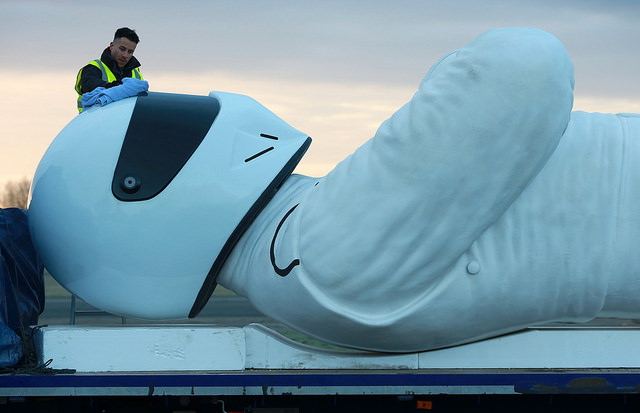 Amanda Hill, Chief Brands Officer, BBC Worldwide says: “BBC Brit will be the new home of Top Gear in Poland so what better way to mark this than by taking them a giant Stig! Fans will be able to spot him on the roads of England, Holland and Germany, he’s impossible to miss!” ’

BBC BRIT offers premium factual entertainment that is intelligent but irreverent. Male-skewing but with broader appeal, it blends expertise with entertainment and fact with fun. The channel will become the exclusive home of Top Gear and covers a rich variety of subjects: cars; science; adventure; business; life-changing moments; extreme characters; quirky eccentrics and plenty of laughs.

Estate agents and traffic wardens will be replaced by ROBOTS in 50 years, SyFy expert predicts