But how do people stand out from the crowd? Here’s a look at some of our favourite Football PR moments from over the years:

Ok, ok – not strictly a PR stunt – but this is the ad that got us all thinking about our favourite football PR and marketing moments. Christiano Ronaldo, arguably the world’s best footballer, stars in a 6 minute epic from Nike. Words can barely do this advert justice, so sit back and enjoy:

What if you had the perfect excuse to watch the UEFA Champions League without your girlfriend?

A week before the UEFA Champions League Final in Milan, the beer brand targeted a handful of blokes out at dinner in São Paulo with their girlfriends.

As the guys open their menus they discover an enticing proposition…

As the Euros crept ever closer brands were starting to activate their campaigns. Whether it’s Paddy Power’s not-so-subtle dig at Scotland’s failure to qualify or Carlsberg’s free ticket pop-ups, there is nowhere to hide. But these are smaller scaled campaigns compared to the one underway by Orange. 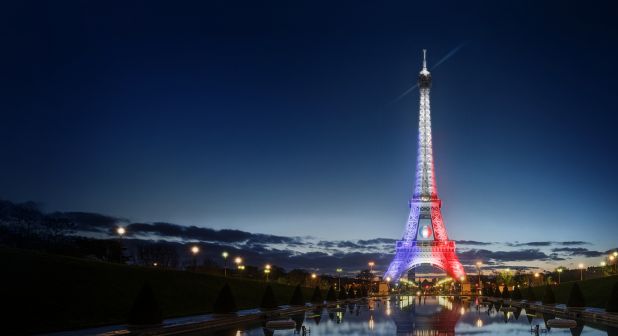 The ‘Orange Sponsors You’ campaign is looking to put the fans back in the spotlight; highlighting the teams that are best supported during the tournament by lighting the Eiffel Tower in that nation’s colours. Orange will be monitoring social trends throughout each day and, 10 minutes after the final game on each day, the best supported team will adorn the famous monument. Individual fans, too, are being recognised by photographers on the hunt for the best fans throughout the tournament.

The campaign has a great ad running alongside it featuring one of French football’s most famous sons:

With all the wealth in football it’s a great move from Orange to recognise those that truly make football the incredible spectacle it can be. There will be a lot more campaigns from companies looking to capitalise on Euro 2016, but they’ll have to be pretty good to top this effort.

One of the most (in)famous betting PR stunts was, unsurprisingly, from Paddy Power. Nicklas Bendtner, the man who once claimed he was up there alongside Lionel Messi and Christiano Ronaldo at the top of the men’s game, celebrated in an unusual way when he scored against Portugal for Denmark. 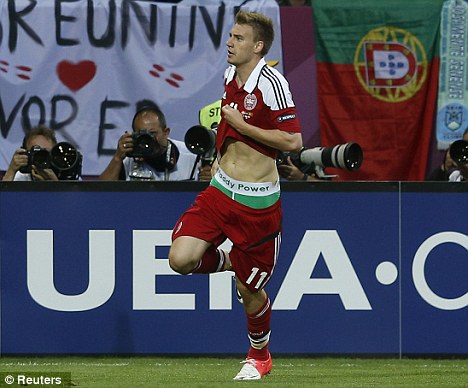 Sprinting away following his strike he pulled his shorts down, lifted his shirt up to reveal a pair of green ‘Paddy Power’ branded pants. He was fined an exorbitant amount of money for the stunt which, he claimed, was just a demonstration of his lucky pants.

The stunt achieved global coverage and, despite the whopping fine of £80k, was a massive success.

‘In Case of Emergency’

The David Moyes reign at the top of Old Trafford was an ill-fated one. Despite the mediocre results and dodgy signing it did give us two entries in our favourite Football related PR stunts. 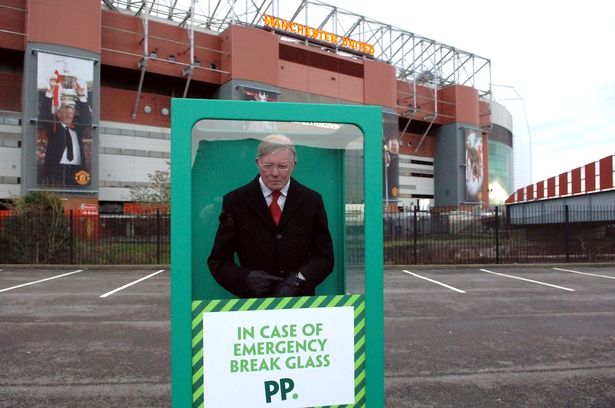 The first, from Paddy Power, was to install a glass box outside of Old Trafford containing Sir Alex Ferguson (or a statue that looked a whole lot like him.) The messaging, simple but effective, made this campaign a success as the sign read “In case of emergency break glass.”

How the United fans wish that was still an option.

The second of the David Moyes stunts is also from Paddy Power. As his reign was coming to an end sports correspondents all over the country said it was like a spectre was following him around and that he was “on borrowed time” in the job. 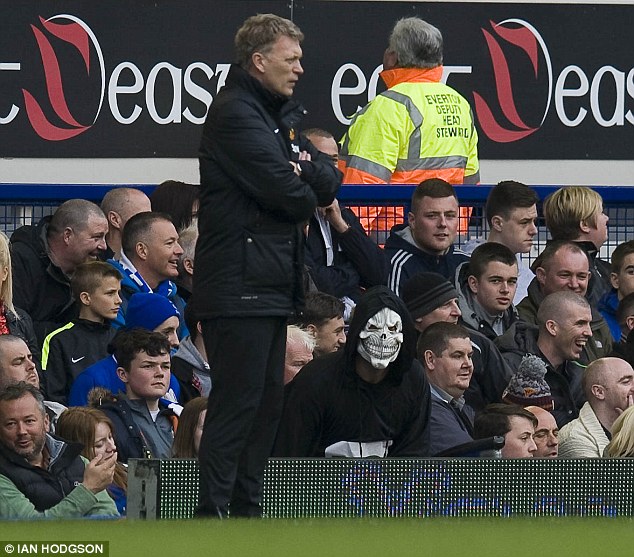 Paddy Power, never ones to miss a trick, hired a chap to dress as a Grim Reaper and sit near the dug out as Moyes was managing the lads on the pitch. The pictures are sensational and despite the chap being escorted from the ground, it was a great moment and a stroke of genius from the team.

In January of 2015 Paddy Power offered David Ginola, of Spurs and Newcastle fame (and Villa for a bit), £250,000 to run for the FIFA presidency. At the time Sepp Blatter sat atop the world game, untouchable, but maybe the charisma of the French maestro could sway the voting body to install him. 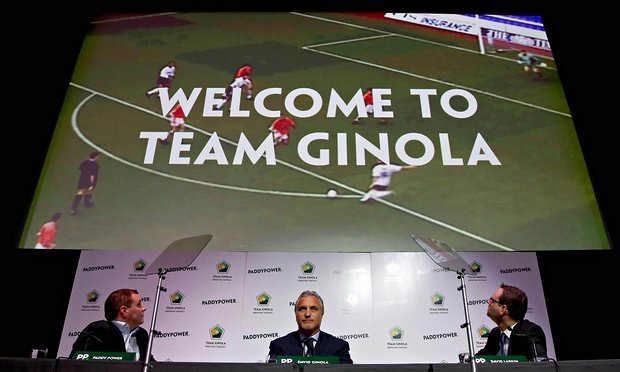 They didn’t, of course, as it transpired corruption was rife throughout FIFA and many of the people at the top of the game have since been removed from their position and a massive investigation has begun.

Maybe there’s a chance for David yet?

PRINGLES AND THE GIANT BOOT

A sure fire winner in the PR world is making something massive out of your product. Pringles did just that for the World Cup in Brazil; a giant football boot made out of Pringles tubes. To add a Brazilian twist they even threw in a Brazilian model.

At the other end of the spectrum we see some brands making things that are incredibly small for their stunts. That’s what Dave did to promote the launch of ‘England’s Top 19 Footy Heroes’; England players faces made out of Brazil nuts:

A favourite in the office. Paddy Power (a name that’s cropped up once or twice in this list so far) tasked the world’s greatest physicist with working out just how England can win something. The result was a great video and incredible coverage.

Another stunt, another carving. This time we saw the faces of several top footballing stars carved onto watermelons that were displayed in Sao Paulo before the start of the World Cup in Brazil. (It’s Cristiano Ronaldo, Messi and Neymar if it wasn’t clear from the pictures…

Emirates Airline, a proud sponsor of football throughout the world, staged a pre-game safety drill in the middle of the pitch at Hamburg’s home ground Volkparkstadion in front of 57,000 fans.

Using some of their cabin crew, donned in the now iconic Emirates attire, they staged a pre-flight safety check and were met with quizzical glances from the baying fans.

That’s before the group of women ended the safety check and began showing off their incredible ball skills. Mouths opened, jaws dropped and cheers roared as they demonstrated close control that would many of us to shame. They then lined the balls up on the edge of the box before slamming home past the goalkeeper to riotous applause from the assembled crowd.

Football, again, proving it’s the greatest sport in the world. Oh, and the stunt was pretty good too!

An email arrived in my inbox; “This is friggin awesome” with a YouTube link. Nothing else; no brand, no content, nothing. I clicked. I watched. A tear welled up, it instantly went to everyone in the office.

Heineken, long time creators of great ads, have outdone themselves once again. They looked into my mind and drew up a blueprint of what would appeal to me; bromance? Check. Football? Check. Beer? Sure. All of that, sprinkled with the Champions League music, and we are onto a winner:

There’s not much else to say about this; Heineken have tapped into everything that makes an ad great – it even has a happy ending!

This one pains me as a Chelsea fan. Semi-finals day. Chelsea are trailing to Swansea with time ticking away. The ball rolls out of play and the Swansea ballboy collapses onto the ball to protect it from Eden Hazard who, understandably, is in a rush to get the game moving again. So he kicks the ball out from under the lad, who then goes down doing his best impression of a professional footballer. Hazard was sent off and brands cashed in: There are hundreds more from brands both big and small, and we obviously couldn’t cover them all here. So if you have favourites, or ones you think should have made the run down, then let us know! Now, get out there and watch England vs Wales with the rest of us.

Cannes Lions presents 'Zen and the Art of the Publicity Stunt'