Bark to the future!.

Samsung’s Futuristic Kennel Is The Ultimate In Doggy Luxury

London, UK – 4 March, 2015: Samsung Electronics have provided a tantalising glimpse of the future for tech-savvy pampered pooches by unveiling an architect-designed Dream Doghouse which represents the ultimate in canine luxury.

The kennel took a team of 12 designers and fabricators two weeks to design and over four weeks to construct and was commissioned to celebrate Samsung’s sponsorship of the world’s largest dog show, Crufts 2015. The futuristic structure was inspired by the growing trend to merge technology and pet-care. 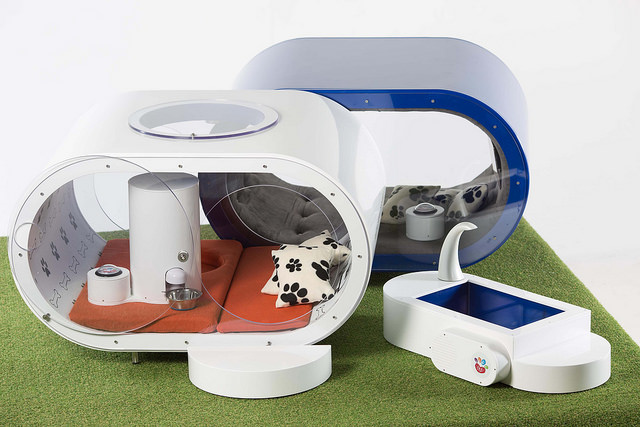 The Samsung Dream Doghouse will be on display at the Samsung stand at this year’s Crufts, which runs from Thursday 5th March at the NEC in Birmingham. 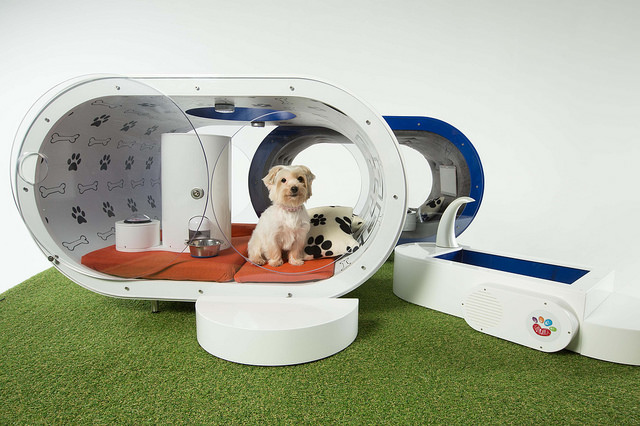 The proto-type indoor kennel consists of two areas; one for rest and relaxation, the other for dining and entertainment, as well as an outside astro-turfed leisure area. 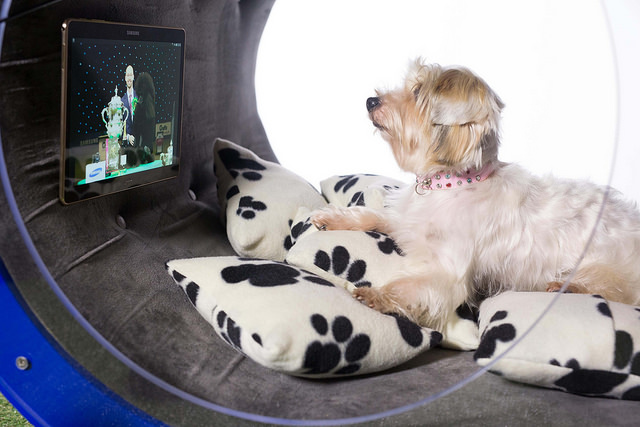 Samsung research of 1,500 dog owners found that 64% believe their dogs would benefit from more technology and gadgets, with a quarter (24%) admitting they would like their dog to have treadmill, and a similar number (24%) a TV or tablet. 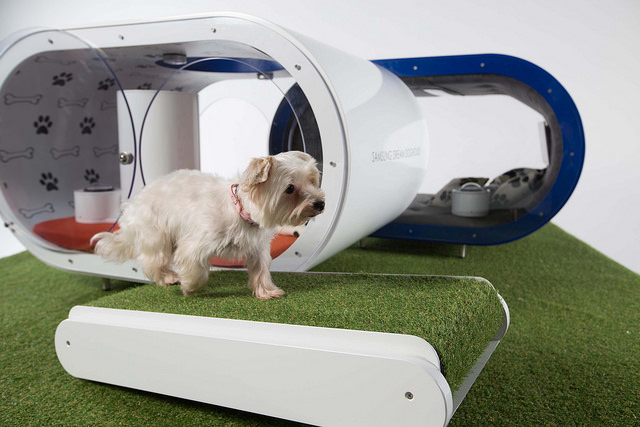 A further 18% said that they would like their dog to have a hot-tub or spa while 22% found the idea of a dog operated feeder the most appealing. Utilising these findings, the Samsung Dream Doghouse was created and includes the following features:

·         A brand new wall mounted Tab S for all of that essential doggy viewing, interaction, and two-way communication with their human counterparts

·         Framed portraits of friends and pooch pin-ups, including a dog’s ultimate pin-up; Best in Show winner of Crufts 2014

And as if that wasn’t enough, this pup pleasure dome has even more to offer the discerning hound, with an in-built doggy treadmill to keep them trim (and work off all those self-dispensed snacks), as well as a hot-tub spa for some well-earned rest and relaxation after a long day of tail wagging. And with 21% of dog owners admitting that a bespoke canine treadmill would be their most desired gadget for their pet, it’s a win for both dog and owner!

The study also showed that this high-tech lifestyle may not be so far off, with a quarter (24%) of owners admitting to having made a social media profile for their dog. And if updates aren’t being shared on a tailor-made pet-profile, then they will be on their owners’ own social media pages, with research showing nearly half of dog owners regularly post pictures of their dogs online.

A further four in ten (40%) owners have left the TV on whilst they are out of the house to keep their dog company, whilst a quarter (26%) use the TV to block out noises that may scare their precious pup, such as thunder or fireworks.

Some owners even go so far as to video call their dogs when they’re away, with 14% admitting to having done this. And when back in the comfort of their home, 31% admit they like to curl up in front of a movie with their favourite pooch!

The findings also revealed that pampered pooches really do rule the roost in British households; being considered as a fully-fledged member of the family (85%), influencing important life decisions such as where they live or what job they have (53%), and even enjoying the same meals as their human counterparts (41%). It also revealed that over half (56%) of owners would mourn the death of their dog more than an extended family member such as an aunt, uncle or even a grandparent!

Andy Griffiths, President, Samsung Electronics UK and Ireland says, “With the Samsung Dream Doghouse, we wanted to reflect the nation’s growing trend for using technology. From dogs who have social media profiles to owners who use video calling to check on their pet while away, technology is fast becoming an integral part of everyday life. Samsung has been a proud sponsor of Crufts for over 20 years, and we recognise that our dogs are firmly established part of the family.  The Samsung Dream Doghouse looks sleek and modern, featuring the kind of tech the discerning dog of the future will need.”

Samsung Dream Doghouse will be on the stand from the 5th – 8th March, Hall 3, stand 72