What’s being human got to do with it?.

Tinder seems to be the contemporary holy grail for marketing stunts. However using it for this purpose is not the simplest of tasks, as many a failed campaign has proved.

Whilst being hugely popular, it has its limitations, chiefly the fact that you can’t guarantee any ‘swipe fall’ and if you do, it’s very difficult to amplify. However, every now and then, someone cracks it. 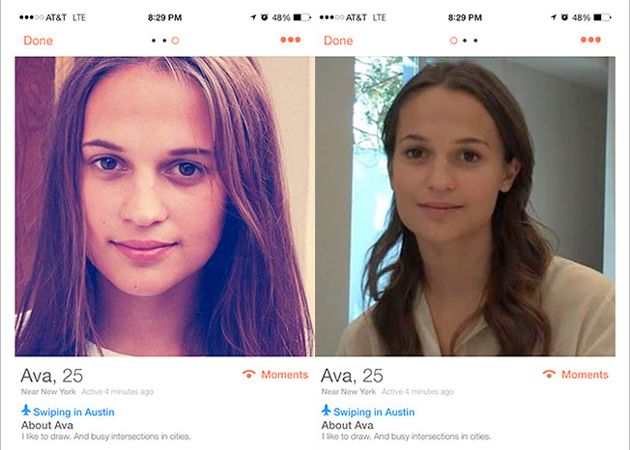 And that’s just what the PR team for film Ex Machina have managed to do, and not just because they were able to use Swedish actress Alicia Vikander’s image as a profile picture.

According to AdWeek, “Tinder users at the SXSW festival on Saturday were encountering an attractive 25-year-old woman named Ava on the dating app. A friend of ours made a match with her, and soon they were having a conversation via text message.”

However, once AdWeek’s “friend” Brock visited Ava’s Instagram page (another nice social media hit), all he found were advertisements for Ex Machina, which funnily enough, happened to be premiering at the festival that evening.

The reason this stunt is effective is because it ties in neatly with the film’s narrative rather than just being a desperate attempt at tacking on yet another digital aspect to form that elusive ‘360’ campaign.

The film, as an exploration into artificial intelligence, and more specifically the possibility for emotional interaction between AI and humans, lends itself perfectly to the use of this dating platform – especially when the means of communication is primarily through technology.

Sweets for my Sweet, Sugar for my Salary

Keep Hunger Locked up ‘til Punch