Keep Hunger Locked up ‘til Punch.

If you haven’t seen any of the media attention surrounding Jeremy Clarkson’s latest ‘fracas’, then you must have been living in a cave for the past week.

Thankfully, it didn’t go unnoticed by chocolate bar giant, Snickers who sent the embattled Top Gear presenter a whole box of nutty chocolaty goodness in an extension of their ‘You’re not you when you’re hungry’ campaign. 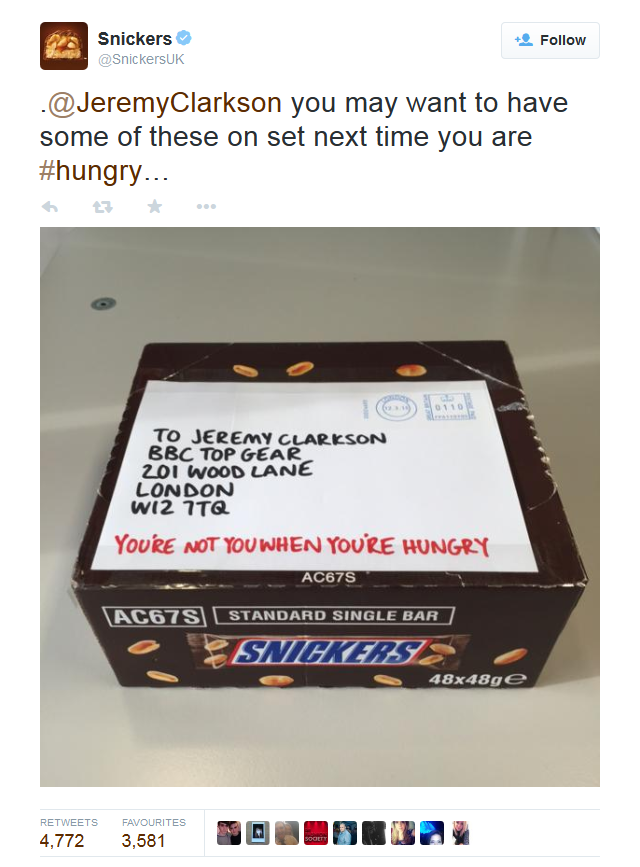 The revelation that ‘Jezza’ allegedly punched a producer from the long-running BBC show when denied a steak after a long day of filming isn’t a million miles from Snickers’ long running TV campaign, which sees chocolate dispensed to hungry folk who are exhibiting some serious diva behaviour due to their need for a feed.

The reactive stunt is a great bit of PR with over 4,700 retweets, but it does make you wonder whether maybe a Snickers could have saved the day…

What’s being human got to do with it?

Getting Retro for the Red Cross